The distortion of beauty 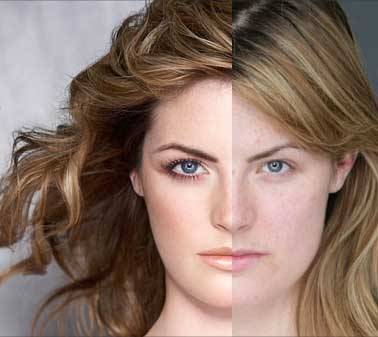 This image is taken from the popular viral video, published by Dove, titled "The Evolution of Beauty". The video tracks the steps and measures taken to transform a model into the image plastered onto billboards and advertisements. In the image above, the obvious editing and distortion of the true image of beauty is made prevalent.

The dictionary defines beauty as a quality present in a thing or person that gives intense pleasure or deep satisfaction to the mind, whether arising from sensory manifestations, meaningful design or pattern, or something else, such as personality or spiritual qualities.

This definition of beauty states that beauty is not in physical attributes, but in the emotions tied to them. Society distorts this definition so that young women and men today are left with a twisted idea of what beauty is, or what makes them beautiful.

In the sixteenth century, society decided it was beautiful to be translucently pale. In order to attain this quality, women painted their faces with a foundation of white lead and vinegar, and painted on fake veins to feign transparent skin.

Today this sounds irrational and insane, given that lead is poisonous and the treatment occasionally resulted in muscle paralysis and in extreme cases, death. However, is it really any different from baking in a tanning booth for hours, increasing the risk of melanoma, or surgically altering a body in order to conform society’s idea of a beautiful figure?

So who defines beauty in our society today? Four hundred years ago, it was Queen Elizabeth, whose translucent skin and bright red hair set the standard for that time period. Today, it is celebrities and public figures who give society an unrealistic and unattainable goal for beauty.

Young women and men today are surrounded and constantly indoctrinated with today’s twisted idea of societal beauty. Young girls resort to extreme measures to attain their goal to have the “perfect body” or “perfect face”.

“Celebrities, in general, set a precedent of how we should look, but it’s unrealistic because of editing and airbrushing,” junior Lauren Wade said. “Our biggest insecurities are compared to their greatest attributes.”

Airbrushing contributes to the public’s unrealistic perception of beauty. Magazines airbrush and edit already stunning celebrities to conform to the wants of the public. In some ways its a never ending cycle of dissatisfaction. The public demands a realistic representation of beauty, but at the same time is dismayed when a public figure goes to the beach and displays a figure that is anything but the epitome of perfection.

This creates a never ending cycle: The media puts out their definition of beauty, the public claims their frustration at the unrealistic definition, but continues to pressure public figures and celebrities to maintain that definition and image.

Measures have been taken in the twenty first century to buck the unattainable definition of beauty (microscopic waist, thigh gap, doll like features). Jennifer Lawrence is one of the more outspoken stars concerning body image and Hollywood’s tough body standards.

“In Hollywood, I’m obese. I’m considered a fat actress. I’ll be the only actress who doesn’t have anorexia rumors” actress Lawrence stated.

Jennifer Lawrence, who is perhaps the antithesis of obesity, addresses the standards of Hollywood perfection, and attempts to expose their extremities. If her slender, athletic, and widely coveted figure is considered undesirable, there’s no hope for the rest of us.

So how does a person develop a healthy body image in a society that constantly feeds us a warped definition of beauty and tells us that beauty only comes in one form?

The key word is relativity. It comes along with the cliche phrase, beauty is in the eye of the beholder. If the public starts to take the actual definition of beauty and apply it to their own lives- the definition that states beauty is how something makes you feel rather than how it appears aesthetically- there could begin to be progress in undistorting the warped perception of beauty.