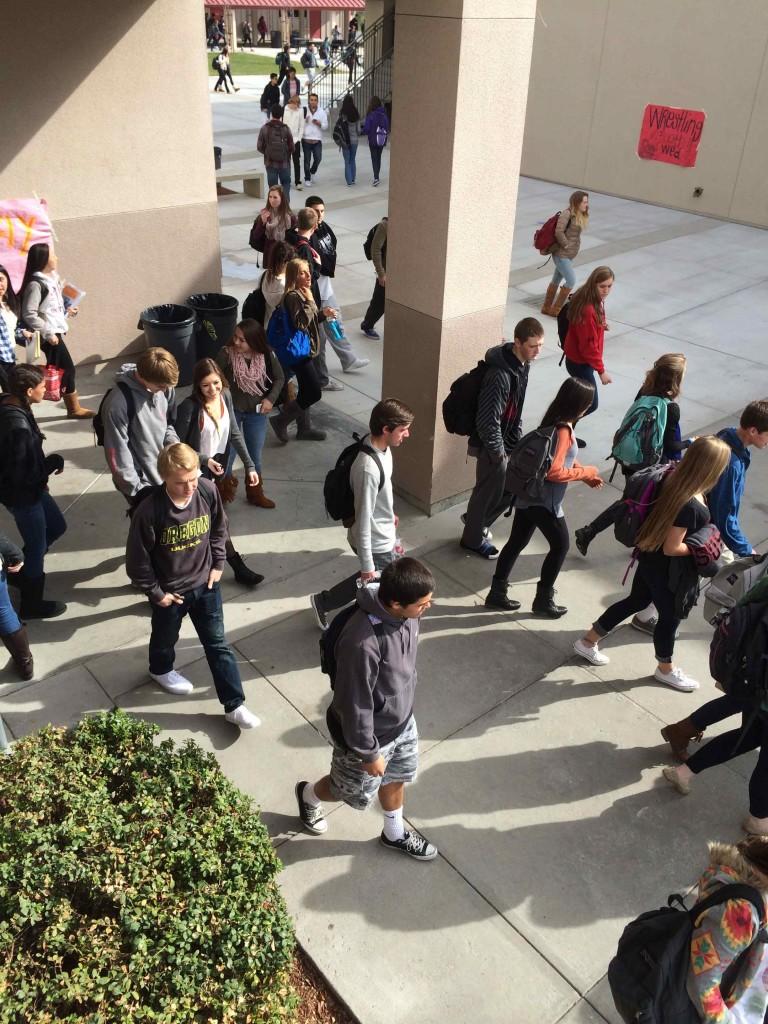 Walking through the halls is difficult during passing period, but during a fire alarm it can be worse. All students and staff evacuate the buildings and that can make it hard to move quickly.

Over the last few months, Monte Vista has experienced a significant amount of fire alarms. Whether it was during class, before school, or during passing period, the fire alarms were ringing at a confusingly frequent rate. While most students enjoy the break from class, the behind-the-scene processes implications of the frequent fire alarms isn’t often understood.

Each time that the fire alarm goes off at MV, the alarm company contacts the school and waits to receive confirmation that it is indeed serious and to call the fire department. Usually at Monte Vista, administration has been able to figure out whether or not it was a false alarm or a real one. However, there have been a few times where they didn’t know and had to signal for the fire department to come.

It has been determined that the majority of the drills came from one sensor in particular. Although it has been replaced, it continued to get set off.

Students and faculty are also greatly affected by this problem. Classes that are taking a test during a fire alarm were interrupted as they had to evacuate.

“Well most of the fire drills were during my tests and my teacher didn’t give us extra time so in reality we had less time for a test than we could have,” Freshman Brandon Bol said.

However, sometimes the drills can be a nice break during class.

“On a lecture day though, they were amazing,” said Bol.

Students that are injured have a harder time evacuating the premises during a fire alarm. Senior Erin Donnelly, who has a torn ACL, was on crutches for most of the alarms.

“It has been difficult for me to get out of buildings during the many fire drills,” said Donnelly. “I couldn’t use the elevators to get out and had to try and crutch down three flights of stairs.”

Teachers have some issues too with the interruption in their teaching. Fire drills during presentations can be a nuisance and affect a student’s grade.

At MV, each year the school needs to have 4-6 planned drills, including evacuation, intruder, fire, and shelter drills. Vice Principal Evan Powell confirmed that the school is past that amount and has met the quota.

“Although it is very disruptive to everyone at Monte Vista, including students and staff, I am happy that they take it seriously each time and follow the rules for evacuating.”