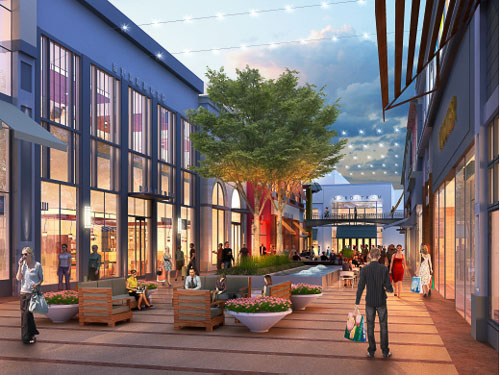 A look at the upcoming layout for Broadway Plaza.

The popular Broadway Plaza in Walnut Creek is about to undergo a serious makeover. The owners are set to invest a quarter-billion dollars i the outdoor downtown mall.

On Tuesday February 4th, the City Council voted to approve a plan for Broadway Plaza that will increase the size of the center by 300,000 square feet and redevelop and demolish another 200,000 square feet of buildings and parking garages. This means an expanded Macy’s that is all in one building, space for a potential fourth floor, new multilevel parking garages, and completely redesigned shops and outdoor space.

The building timeline calls for the Nordstrom garage and all of the stores in between Nordstrom and Macy’s to be demolished beginning early this year. Macy’s expansion would also start this year and be completed along with the parking garage by 2016.

while the plan allows buildout to go as long as 20 years, Broadway Plaza owners expect all the work to be done by fall 0f 2017.