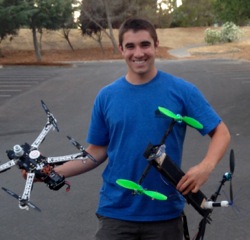 Reynolds poses proudly with his drone. The drone can explore distances of up to half a mile away and can hover in place.

During the springtime, juniors are typically busy dealing with the SAT/ACT testing, school work, sports, or other extracurriculars; most though, aren’t spending their time building their own robotic drone.

Senior McKinley Reynolds is the proud owner and builder of his very own drone, which made its first appearance at Monte Vista in the 2013 Homecoming Rally. Students were in awe as it flew over the crowd, dropping the senior homecoming court results.

Reynolds started building his drone, or Unmanned Aircraft System (UAS), during the spring of 2013. The main reason he built it was to film videos, like a snowboard or biking one, from a unique perspective. However, he noticed that a lot of professionals on YouTube and other websites were using their UAS’s for the same purpose.

In order to stand out, Reynolds set out to benefit the community with his drone. What’s special about his machine is that there is a “passenger” feature, where someone on the ground can essentially experience riding inside the drone from the ground. The “passenger” can view the sky through the drone’s video feed, and control the camera by moving their head. Reynolds has already put his drone to a good purpose with this added feature.

“Using this feature, I have given rides to kids in the community and I have aimed to encourage their interest in engineering,” Reynolds said. “I also hope to give people a more positive demonstration of drones and their purposes, different from the military drones on the news.”

Building the drone took Reynold’s about a month. He collected pieces from different locations and manufacturers, and soldered and screwed it all together to create the drone. He also calibrated the onboard computer, to keep the helicopter stable and to correct itself, acknowledging that it was the most challenging part.

Reynolds’s drone is a remote controlled helicopter, but has four motors, making it a “quadcopter”. According to the Federal Aviation Administration, it’s classified as a UAS which is what other drones are filed under. Reynolds controls his drone from a remote location, aided by its video feed. Although his drone is very advanced, it does not contain all the capabilities that a military style drone would have.

“This is where the similarity [between his drone and a military drone] stops,” Reynolds said. “Rest assured, my drone cannot rain down terror from above or travel further than half a mile.”

What’s interesting about his drone, is its unique capabilities. He has two GoPro’s mounted on it, and can film videos from the sky, or have the drone hover and explore distances of around half a mile.

Looking behind the scenes of the drone’s participation in the Homecoming Rally, Reynolds was told that it would be interesting to incorporate the drone into the rally. He had to design a drop mechanism that would work with the paper scroll of the senior homecoming court results. Senior Grey Hansen assisted him by controlling the cameras on the bottom of the drone.

“Bottom line: [the drone] is amazing,” Hansen said. “You can tell McKinley took a lot of time to make it and it’s really successful.”

In the future, Reynolds plans on using the drone to film more school videos, and to film action, sports, and nature videos with his friends.