“No press is bad press” 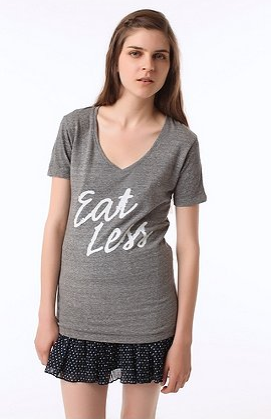 As early as 2003, the widely popular store Urban Outfitters, has been releasing rather offensive products.

Starting with “ghettopoly” – a ghetto version of monopoly – to one of the most recent “Wood Wood Kellog tee” more commonly recognized as the Jewish Star shirt, Urban Outfitters seems to have lost its taste, and frankly its common sense.

The products that have caused the most outrage include the Jewish Star shirt (clearly alluding to the Holocaust), the Palestinian “Victimized” shirt (supporting terrorism), and the “Eat Less” shirt (modeled by an unnaturally skinny girl).

These three shirts have caused an uproar among the public for many obvious reasons causing shoppers not only to wonder why the store would release such items, but also to stop supporting the store.

“Most of the kids you see in that store are younger,” senior Aditi Vepa said. “Now you hear 12 year olds complaining about how they’re fat and how they wish they were older. So,they dress provocatively and stress about being skinny because that’s what they think being older is all about.”

It’s completely outrageous and mind boggling as to why any company would put itself through such ridiculousness.

“It draws on stereotypes not as a means to degrade, but as a medium to bring together in laughter,” creator of “Ghettopoly” David Chang told The Week magazine. “If we can’t laugh at ourselves…we’ll continue to live in blame and bitterness.”

“The shirts get people talking about Urban,” senior Jordan Nakahara said. “Even if people don’t buy the shirts themselves, it gets them publicity, which can be even more valuable.”

Even if all of this is just a series of publicity stunts, it is hard to let such offensive statements go without hesitation.

“I don’t think it’ll have that much of an effect on the shoppers themselves,” Nakahara said. “I think they’d only buy it for the same reason that Urban makes them: to get attention.”

Although the company’s intentions aren’t geared towards offense, it is ridiculous of them to think that people would actually laugh at these blatantly racist and offensive products – and then buy them!

“Some people get offended, but most people just brush it off,” Nakahara said. “I feel like they [the designers] are just misinformed about what’s really happening.”

Even if the fashionistas at Urban are oblivious to how offensive their ‘creative’ slogans can be, they are drawing a good amount of negative attention to the store.

“They’re using that saying “no press is bad press,” Vepa said.  “Even though they are losing buyers, they are still in the news.”

Not only are they sending a bad message to their younger audience, but they are also drawing in negative publicity for their company – there is no real logic behind these supposedly unifying products.

“All of these products definitely cross the line between what is dumb and what is plain old offensive,” Nakahara said. “I think it also has a lot to do with who Urban partners with in terms of designers. The people who design their stuff think that they’re making a statement or being artistic, but really, they’re just being terribly offensive in a very non-artistic way.”