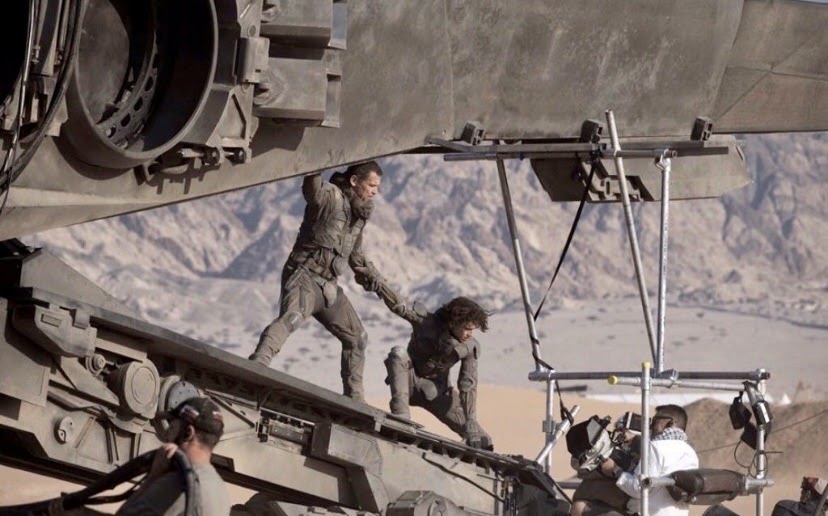 Timothée Chalamet and Josh Brolin working on an intense scene in the desert from Denis Villanevue’s Dune.

Adaptations can be a real hit or miss, and a lot of the time the authors of the original work are disappointed with the outcome of the movie and don’t want their work adapted. But “Dune” is a special case: Frank Herbert welcomed adaptations with wide-open arms. For a long time, “Dune” was considered “unfilmable,” but this never stopped anyone from trying.

One of the first major attempts at adapting “Dune” into a movie was by Alejandro Jodorowsky, a Chilean-French director, writer, and artist. His vision for “Dune” was to create a fourteen-hour-long, part 2D animated, part live-action piece of art.

“It’s different. It was my “Dune.” When you make a picture, you must not respect the novel,” Jodorowsky said in the documentary “Jodorowsky’s Dune.” In some ways, it might have been interesting to have a cross between 2D animation and live-action for “Dune.” But it was a mess, filled with “Yellow Submarine”-esque animation, and Jodorowsky took too many liberties with the source material.

The second and most well-known of the adaptations is David Lynch’s, which came out in 1984. In an interview for Walden Tapes (an audiobook company), Lynch said he’d “never heard of it.” But after reading the book, he fell in love with the story, took the job as director, and also wrote the screenplay. Herbert was very involved in the making of Lynch’s adaptation, helping to fix visuals or telling of the story and setting up scenes. Lynch’s “Dune” was intended to be over three hours long, but much of the footage was cut, resulting in a final length of just over two hours with the final cut being too fast and hard to follow. In the end, after Paul Atreides, the main character, frees the Fremen, he makes it rain on Arrakis and basically becomes god of Arrakis. In the book, Atreides didn’t make it rain and it showed how blindly following idols like him can lead to fighting and war. Luckily, what this movie lacked in story, it made up for in visual design. While many people said that it’s not what they pictured the book to be and were disappointed with the visuals, Frank Herbert actually really liked it.

“Some of the sets are not what they visualized,” Herbert said. “Some are. And some are better. What would you expect from Masters [“Dune”’s production designer] and David Lynch? They’re both artists. Why wouldn’t they improve on the visual sense of the film? And they have a free license to do this. This is what film is all about.”

When Lynch’s “Dune” came out, it was received very poorly, but as time went on, more people began to appreciate it for its visuals and for encompassing the “wacky” nature of the Eighties.

The third adaptation of “Dune” was a mini-series directed by John Harrison, and aired on the TV channel SYFY in 2000. What Lynch’s adaptation lacked in story, Harrison’s adaptation fixed. The adaptation fully told the story of “Dune” but didn’t have the cinematic visuals to back it up. Still, fans and critics really liked it and it even won two Emmys in 2001.

The fourth and most recent of the adaptations, released Oct. 22, 2021 is by far the best adaptation to date. This version was created by Denis Villeneuve, director of “Blade Runner: 2049” and “Arrival,” so he definitely had the right experience for this movie.

“It’s been a longstanding dream of mine to adapt “Dune,” but it’s a long process to get the rights, and I don’t think I will succeed,” Villeneuve said in a 2016 interview with Variety. But almost six years after getting the rights to “Dune,” it was released.

It includes vast shots of the desert that better represent the vastness of Arrakis, a desert planet that is home to the very important Spice Melange (used for intergalactic travel by the Freman as a life-extending psychedelic drug). The casting for the film was also incredible. Timothée Chalamet was an amazing pick for the role of Atreides, and he is visually much like the character described by Herbert in the book. Frank Herbert would be proud of this movie; an important element Herbert wanted from “Dune” adaptations was to have good scenery. He loved Lynch’s adaptation of “Dune” because he loved the visuals of the film and would probably have a new favorite if he could see Villanevue’s adaptation.

Frank Herbert is a legend in the science fiction community and always will be. Seeing his work come to life on the big screen is incredible and breathtaking. With another movie and a prequel series on the way, both directed by Denis Villeneuve, audiences have more to look forward to and generations to come will be introduced to the genius work of Frank Herbert and his “Dune.”