Not so slick with the devious licks 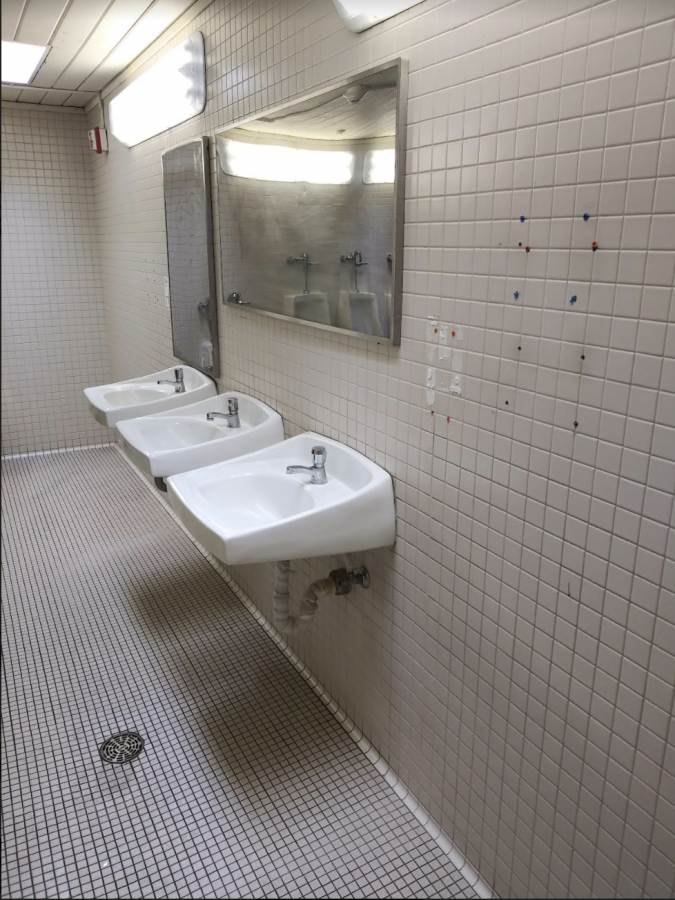 The soap and paper towel dispensers stolen from the 400 bathroom. They have since been replaced.

Across the country, TikTok has inspired a new generation of clout-seeking pranksters who have moved from harmless jokes to vandalism.

This phenomenon started when TikTok user @jugg4elias stole a box of face masks, referring to the stolen items as “devious licks.” The phrase originates from the word “lick,” which means to successfully acquire a large amount of money in a short period of time. With the video immediately going viral with millions of views, TikTok users across the country raced to acquire their own “devious licks,” stealing hand sanitizers, soap dispensers, laptop monitors, screen projectors, and science equipment. One student even claimed to have stolen a school bus, flaunting the bus keys and driving the bus to random locations in their video.

At Monte Vista, soap and paper towel dispensers started disappearing off the walls, and even a toilet ring seal was broken and detached. As schools began catching on to the trend, they were quick to respond, claiming acts of vandalism and possibly felonies.

Much of Monte Vista’s staff could not comprehend the reasoning for committing a crime and then posting it on social media. Chad Geernaert, a history and government teacher at Monte Vista, first heard of the trend from the local news.

“I was really disappointed that people would try to actively destroy their school,” Geernaert said. “I felt bad for those who had to repair the damages and mad that our tax money was being stolen like this.”

Although seemingly ridiculous in every possible way, students still post their crimes on social media, completely forgetting the concept of digital footprints.

The impulsiveness of the teenage mind only contributes more to the phenomenon. Sophomore     Sammy Kan believes that students are motivated by their hunger for internet clout and likes.         “When millions of people online are liking your videos, it makes you feel validated and special on the internet,” Kan said. “As our daily lives are revolving more and more around the internet, the concept of internet presence and popularity becomes increasingly valued.”

On Sept. 17, 2021, a statement regarding the trend was posted on the daily bulletin, warning students that “campus monitors, cameras, custodians and staff are on the alert” and the actions  were “suspendable offenses.” However, warnings are no guaranteed solution as much of the ‘fun’ behind the trend comes from the thrill of breaking rules and stealing items.

Across the country, schools have gone to extreme measures to put an end to the trend. Some of these require students to bring clear backpacks, removing doors off of stalls, and have a staff member stationed outside of each bathroom to make sure nothing is getting stolen.

However, Monte Vista Principal Kevin Ahern views the solution as a community effort.

“It comes down to how willing our student body is to put up with it,” Ahern said. “You can only punish so far, but it’s about if the punishments can change behavior.”

Ahern believes that simply applying stricter rules and consequences may even motivate students to steal more to satisfy the thrill.

“The more security you put in the more holes you get,” Ahern said. “That’s why it is more important for us as a community to step up and say that this is not okay.”

The money spent on repairing the damages also adds up, and comes at the cost of classroom supplies and materials.

“The money used to replace those items comes straight out of our discretionary money,” Ahern said. “It isn’t some sort of endless amount of money we can invest in to fix our bathrooms. From the time a soap dispenser is stolen to the time a replacement is installed, it costs around $100 for each individual dispenser. Hiring plumbers is also expensive and to repair a toilet you have to fix the seal and piping.”

As the items eventually need to get replaced, it comes down to the students to prevent them from further getting stolen.

“We can’t monitor students’ behavior all the time,” Ahern said. “It’s up to our community to trust each other.”