The Texas Heartbeat Act: Is it about saving babies or controlling women? 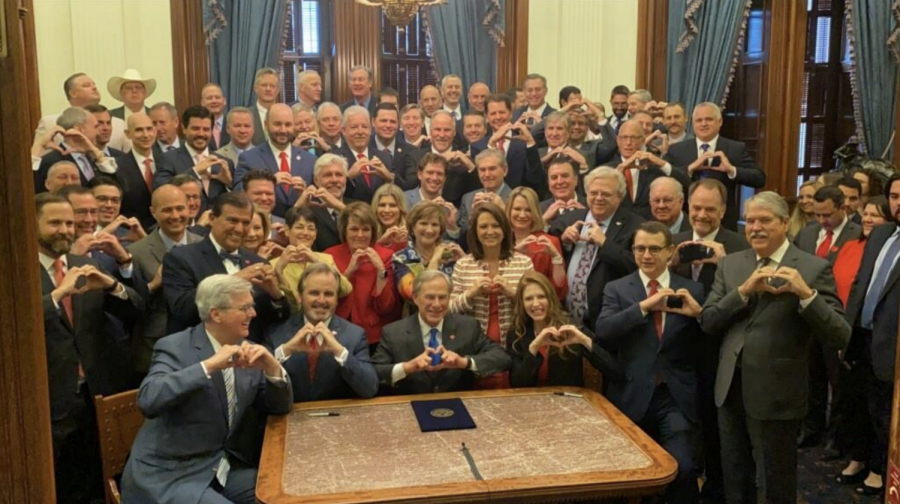 Texas Governor Greg Abbott signs the Texas Heartbeat Act into law on May 19, 2021. This unprecedented abortion ban takes away a woman's bodily autonomy.

On September 1st, the nation’s strictest abortion ban commenced: the Texas Heartbeat Act. This law overpowers a women’s constitutional right to an abortion.

Signed by Texas Governor Greg Abbott in May, the Texas Heartbeat Act bans abortions after six weeks of pregnancy, which is when cardiac activity is said to be detected. However, most women usually aren’t aware that they are pregnant at this stage. To be six weeks pregnant means that it has been six weeks since a woman’s last period. This means that for a woman with a consistent menstrual cycle, her period would be two weeks late. If a woman discovers that she is pregnant before the six weeks are up, it still leaves her with scarcely enough time to confirm the pregnancy with an official test and make a decision on what would be most beneficial for her situation. If she decides to get an abortion, she would have minimal time to make an appointment and obtain the abortion before her reproductive rights are stripped away.

Not only does the act prohibit abortions, it also incentivizes private citizens to sue those that abet a woman in getting one, allowing them to gain . Those at risk range from the doctor that performed the procedure to the driver that gave the woman a ride to the clinic. Because private citizens are the ones enacting the law, state officials cannot be held responsible for implementing the ban and thus are able to evade strict judicial scrutiny.

It should be known that banning abortions will not stop people from getting them; they will either happen illegally, dangerously, or people will go out of state to receive them in secret. According to the World Health Organization (WHO), “Each year between 4.7% – 13.2% of maternal deaths can be attributed to unsafe abortion” and around 45% of all abortions are unsafe.

Additionally, this law disproportionately affects marginalized populations: women of color, undocumented immigrants, and women in poverty. According to the Guttmacher Institute (a pro-choice research and policy organization), roughly 70% of abortions in Texas were given to women of color. It is becoming increasingly difficult for me to see how “pro-life” people could implement a law that would increase deaths of women.

As for going out of state to receive an abortion, this option is only available to financially stable individuals who are in America legally. Undocumented, poor women have no choice but to have an unsafe abortion or to have the child, both not being optimal options. This law takes away a woman’s right to choose; it takes away her bodily autonomy.

To understand why this bill was implemented, we must to understand what this bill was meant to accomplish besides reducing legal abortions. These lawmakers view cardiac activity, or a heartbeat, as a sign of life, and as Texas Senator Bryan Hughes said, “If a Texan’s heartbeat is detected, his or her life will be protected.” Their aim is to save the lives of unborn children, and there is nothing inherently wrong with their motive. The problem lies in the fact that they are willing to abolish a woman’s right to choose in order to achieve this goal.

Not only did these officials limit women’s reproductive freedom, they put all the responsibility of pregnancy on women. A woman does not impregnate herself. Instead of restricting a woman’s choice, many suggest we should make vasectomies mandatory. This would stop abortion at the source: a man. When a man and his partner are financially and emotionally stable enough for a child and come to an unanimous agreement, he can usually get his vasectomy reversed. For decades, women have had to bear the burden of contraception, contraception that can be painful and can cause significant irregularities in her menstrual cycle, mental health, and physical health. According to the National Institutes of Health (NIH), “Vasectomy is one of the most effective forms of birth control. In the first year after a man has a vasectomy, a few couples will still get pregnant. But the number is far lower than the rates of pregnancy among couples using condoms or oral contraceptive pills.” So, why don’t Texas lawmakers implement mandatory vasectomies? How come there are no laws that restrict male reproduction? The truth is that mandatory vasectomies would infringe on a man’s bodily autonomy and that makes society uncomfortable.

Instead of imposing a near-total abortion ban, lawmakers should aim to reduce abortions through alternative legislation. Firstly, comprehensive sex education should be implemented in all high schools. Secondly, effective and emergency contraception should be widely accessible and affordable. The Brookings Institution (a nonprofit public policy organization) stated, “…increasing access to highly effective methods of contraception (and thus preventing unintended pregnancies) is a more effective way to reduce abortion rates.” Additionally, we should be providing financial aid and support to pregnant women to give them more of an incentive to go through with their pregnancy.

Pro-life politicians’ perspectives on the bill and their goal to protect the lives of unborn babies are understandable, but the Texas Heartbeat Act does nothing productive to reduce unplanned pregnancies which would in turn largely help reduce abortions. This law is a direct attack on those with reproductive organs. Texas lawmakers should no longer be able to disguise their outdated beliefs through evoking poignancy from their accusations of immorality.