Dark academia: Where the studious are in style 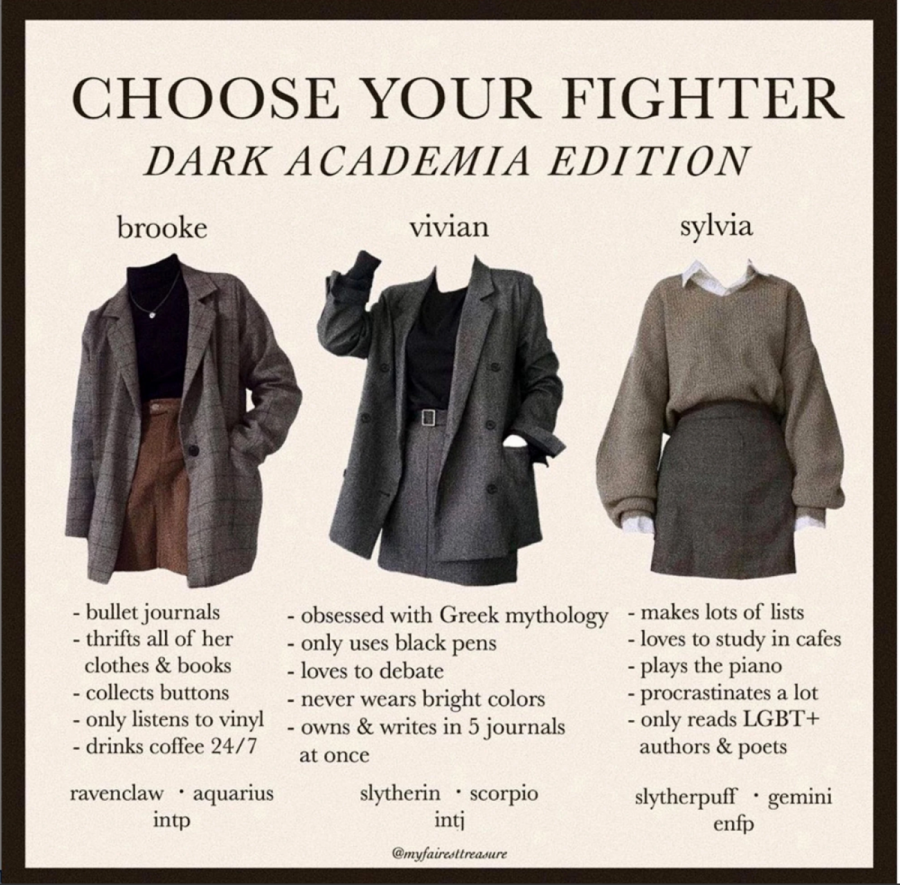 Many Dark Academia posts are similar to the one above, depicting Instagram posts like lookbooks, book recommendations, and guides to the popular aesthetic. Dark Academia social media accounts are found most prevalently on Instagram and Tumblr.

You’ll find them on TikTok, Instagram, or the corners of libraries, poring over a Donna Tartt novel, decked out in black turtlenecks, plaid blazers, and gold vintage jewelry.

Dark Academia, an internet aesthetic mainly developed on TikTok and Instagram by teenagers, has garnered immense popularity within the last year. Swathed in dark green, golds, and comforting shades of brown, the subculture covers everything from fashion to music to literature. Dark Academia fashion, one of its most prominent aspects, draws inspiration from the clothes that might have been found among school-goers in the ‘40s to create androgynous, scholarly ; looks.

But one of the most intriguing parts of this social media niche is the focus its followers put on learning. You’ll find many Dark Academia Tumblr accounts full of warm-toned photos of statues and university halls, along with quotes from classical literature such as “The Picture of Dorian Gray” by Oscar Wilde or a couple lines from the Greek poet Sappho. Dark Academia is made up of the kind of things that only nerds, college professors, or English majors would be expected to take interest in: analyzing poetry, reading classic literature, and obsessing over modest and vintage-inspired clothing that ends up seemingly both close and far from the fashion tastes of teens right now.

“I think the scholarly aspect of it is actually very motivating, it makes me want to learn everything I can and stay on top of my work. It’s also helped me keep my notes more organized,” Phillips said.

Modern works, such as Donna Tartt’s The Secret History, or cinematic Dark Academia staple “Dead Poets Society” (1989) are loved for their somber romanticization of death, learning, and literature. On Instagram accounts one might find a moodboard of the “Dead Poets Society”’s tragic hero Neil Perry, a gothic-esque quote from contemporary writers like V.E. Schwab or Neil Gaiman, or shots of rainy, fog-swept London.

Greek mythology has also been quite popular throughout the aesthetic (possibly from now-older Percy Jackson fans, but that’s only speculation) and so has, interestingly enough, poetry, something that most high school students would be expected to hate.

“To people our age, this aesthetic is sort of a get-away from reality- it matches the aesthetic we’ve been reading and watching since we were little, for example, [the] Narnia or Harry Potter [series],” Phillips said.

There’s also been a revival of Harry Potter in TikTok’s mainstream media that possibly contributed to the rise of this aesthetic over the time of the pandemic. Niches on TikTok cater to the more bookish population of teens, painting readers and learners as aesthetically pleasing instead of nerdy.

“There’s definitely been a rise in the popularity of Dark Academia over the last year, though I “discovered” it and began conforming to it before the pandemic,” Phillips said. “I think because people miss school so much, bringing the aesthetic of it to themselves is a sort of coping mechanism to make them miss it less. I know it’s definitely helped me out.”

Gothic, vintage, and moody all at once, Dark Academics revere the ancient and romantic, the scholarly and the tragic. But this seems to be the first time in recent, TikTok-inspired trends that a major trend has revolved around things usually considered nerdy or pretentious. In the dusty halls of Dark Academia, where faded gold sunlight streams between pillars and the whispers of curious students echo, one may find another aspect of today’s teens, one that still loves the romanticized side of learning, where passion and curiosity are what compel them to learn far more than do school and good grades.