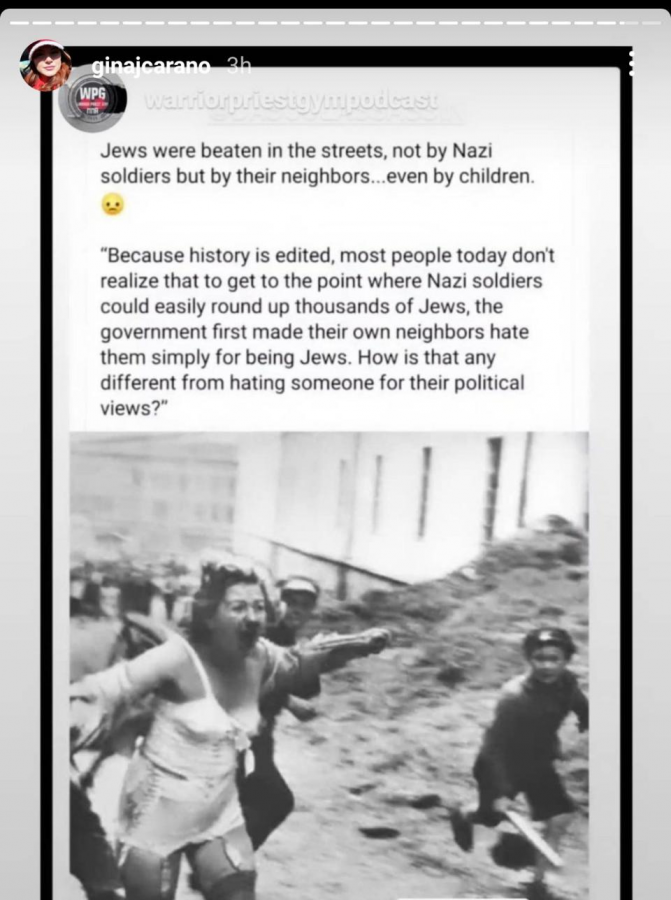 “#FireGinaCarano” trended on social media soon after it was posted on Instagram. Carano has since been fired from her role on the Mandalorian and dropped by her talent agency. This is one of several tweets in the past year that has spurred controversy on social media.

Disney actress Gina Carano was fired from her role as Cara Dune on the Disney+ original Star Wars series “The Mandalorian” after posting personal political commentary on Instagram. Carano is the most recent celebrity in a long line of others to be the target of cancel culture.

The Hollywood Reporter was one of the first media outlets to report her firing and said that her Instagram post implied “that being a Republican today is like being Jewish during the Holocaust.”

Soon after the post went online, the hashtag “#FireGinaCarano”’ trended on social media, leading Carano to take down her post. It was too late. Instagram users were quick to screenshot the controversial post which is shown to the right.  Soon after, she was fired by Disney and dropped by her talent agency. Lucasfilm called her social media posts “abhorrent and unacceptable” because they “denigrated people based on their cultural and religious identities.”

Carano does not plan to continue with Disney on “The Mandalorian,” nor the Cara Dune spinoff that Lucasfilm had been planning. During an interview, Carano admitted that her comparison was insensitive, but she said she wasn’t being anti-semitic and voiced concerns over her coverage by news organizations.

“The post never said anything about Republicans or conservatives, it was more about people tearing each other apart. I thought it would be more of a thing that would bring people together,” Carano said. “I’ve got every single big publication saying that she’s comparing conservatives and republicans to this, and that wasn’t really what I was doing.”

While Disney has sided with those on social media calling for her firing, many others on social media disagreed with the actions taken by Disney. Raghava Katuru, a junior at Monte Vista, was shown Carano’s post for the first time.

“My first impressions are that it is a bold statement, however, it is truthful,” Katuru said.  “Hitler sparked the flame of antisemitism in Germany. He convinced the public that Jews were an inferior populus and a detriment to German society. Due to Hitler’s influence, many Jewish people were exposed and then captured by Nazis.”

Nevertheless, according to the Hollywood Reporter, an internal source told them that “they [had] been looking for a reason to fire her for two months, and today was the final straw.” In the past, Carano has also expressed controversial viewpoints on social media. For example, in one tweet, she mocked mask wearing and the Democratic party.

“Carano spoke on very touchy subjects where people feel strongly about their views,” Katuru said. “Though, she should be able to express her views like anyone else and people should respect her opinion. Her tweets should be open to a healthy debate instead of cancelling her for having a different view.”

Most notably, critics of Carano’s firing have looked to a 2018 tweet from Pedro Pascal. In the tweet, Pascal, Carano’s costar who plays the lead character in “The Mandalorian,” compared the situation at the US-Mexico border with Nazi Germany. Fans and supporters of Carano have claimed that Disney is applying an unfair double standard. Moreover, many on social media have voiced concerns about the growing intersection between personal life and the workplace.

“A celebrity has a lot more limelight than the average worker. With that sort of influence comes responsibility,” Katuru said. “A celebrity’s personal life is more watched on than the average person so they do have to be more careful; however, they should not be completely restricted from speaking on issues that they feel like. I believe that the actors should work with the studio and agency to establish certain boundaries as part of an actor’s contract.”

While there is no clear resolution to this complex issue, those on social media continue to wield the power to cancel culture as many others voice their opinions against it.

“I think the cause to eradicate harmful messages online is good but sometimes it’s taken too far and silences people’s opinions which is unfair,” Katuru said.. “[Cancel culture] affects everyday life by putting pressure on people to be politically correct all the time. The fear of being exposed and recorded, has caused people to be more careful and less open about their views.”

Social media has placed almost everyone on the internet, and it would seem that cancel culture has the potential to impact anyone. Gina Carano’s firing and cancellation has spurred intense arguments on the role of social media and cancel culture. However, no matter your opinions on the subject, these recent events demonstrate the significant impact social media has made on political discussion in America.