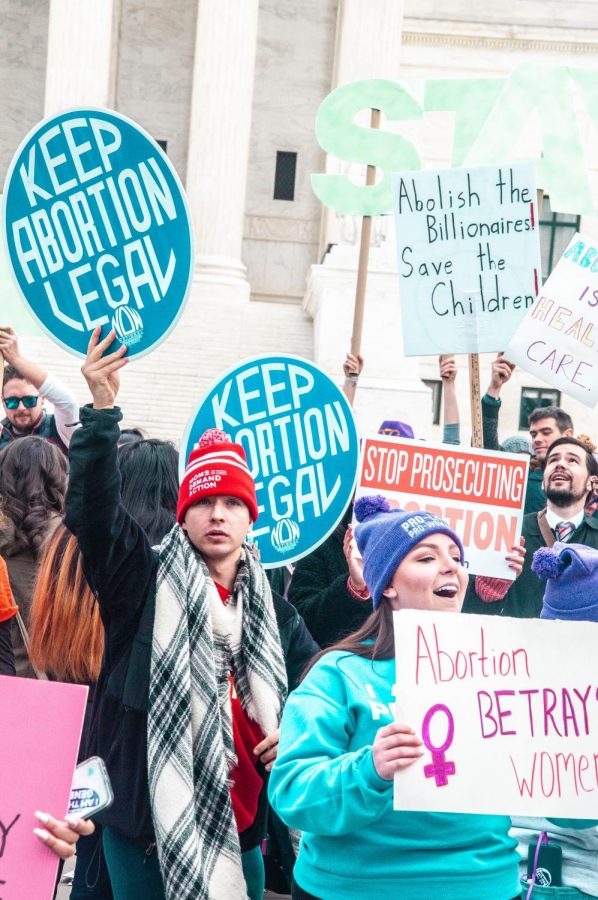 Pro-choice and pro-life protesters gather in front of The Capitol. Roe V. Wade has been put at risk due to the replacement of Ruth Bader Ginsburg with Amy Coney Barrett.

37 years after abortion was legalized, the newest Supreme Court justice, Amy Coney Barrett, may be forcing women to say good-bye to their reproductive rights.

Amy Coney Barrett is a Republican lawyer, jurist, and now associate justice. She was nominated by President Donald Trump to replace former justice Ruth Bader Ginsburg. Barrett is well-known for her strong devotion to the Roman Catholic faith and has been a part of the Christian organization “People of Praise” (POP) for a large portion of her life. POP holds conservative views on gender, sexuality, and abortion.

Barrett’s confirmation pushes the Supreme Court slightly to the right which leaves issues like abortion at risk of being overturned. President Donald Trump stated in 2016 that overturning Roe v. Wade (the court case that legalized abortion) “will happen automatically…because [he is] putting pro-life justices on the court.”

Besides being a part of POP, Barrett is also a member of a pro-life (political movement that opposes abortion) organization called “Right to Life.” This organization has shown their support for the “Crisis Pregnancy Center”: a clinic that pressures women to keep their pregnancies and feeds them misinformation backed up by religious fallacies. In addition, Barrett signed a newspaper ad in 2006 that deemed Roe v. Wade “barbaric.” With all of the context provided, it is safe to say that women’s reproductive rights are at risk with Barrett in such a powerful and influential government position.

Debates about the issue of abortion circulate around the question of when life is formed, something that has long been argued and not yet answered. Some say that life begins at fertilization or conception; others believe it is when a heartbeat is detected or when the fetus has been born. There is no definitive answer to this argument, yet many pro-lifers, those that believe that abortion should be illegal, base their arguments around the conclusive idea that life begins at conception.  This argument is not relevant to the discussion of abortion, but rather it is the issue of abortion being more about the woman than the status of the fetus.

The core of the issue is the pro-life dismissal of the moral significance of bodily autonomy. Bodily autonomy is the right for a person to control what happens to their body without external influence. This law in the U.S. Constitution is why citizens can not be forced to donate blood or be a kidney donor. The pro-life argument is driven by the fact that the fetus has a right to life. But about a woman’s right to her own body? Outlawing abortion and forcing women to give birth is a direct violation of bodily autonomy. Yes, the fetus does have a right to life, but why should we ignore the fully developed life of a woman. A fetus is a possibility, not a person. Pro-lifers’ disregard of women’s bodily autonomy displays that society simply views women as incubators, not as valuable citizens of the world.

A main area of contention for those who are pro-choice—the belief that women should be able to choose whether they want to keep or terminate a pregnancy—is the integration of religion into the issue of abortion. A majority of pro-lifers believe that abortion is morally wrong due to their religious faith, notably Christains and Roman Catholics. While it is reasonable to have beliefs that are influenced by religion, it is also expected that those beliefs are not imposed onto others in ways that restrict them.

Any involvement of religion in the argument of abortion is irrelevant due to secularism, the separation of church and state. The United States alone is home to over 310 religions, and while Catholics and Christians constitute for most of the population, they should not dictate others’ lives. According to the Pew Research Center, a nonpartisan think tank that provides information on demographic trends, 26 percent of U.S. citizens, or roughly 85 million people, do not identify with a religion.

The pro-lifers whose views aren’t necessarily backed by religion tend to hold the idea that a fetus has the potential of leading a meaningful life. Some might say that these embryos could grow up to cure cancer or contribute something significant to our world. But a stranger cannot decide for a woman that her environment is fit to lead a child into a prosperous life. This mentality further proves that our society does not trust women to make wise decisions for themselves and believes that strangers know better than the person actually carrying the fetus.

We also must account for the ways in which a fetus can negatively affect a woman.  Many deem birth to be a mainly joyful experience in a woman’s life, and while it is certainly life-changing, it does not come without its dangers. Pregnancy can cause gestational diabetes and preeclampsia, which causes kidney issues, anemia, and infections. Both of these are dangerous to the upcoming mother and can be lethal. The effects of birth stretch even into the postpartum period. New moms are at risk for postpartum depression, iron deficiency, vaginal bruising, bloody discharge, hair loss, acne, and more. I am not stating all of this to say that childbirth is an awful thing, but instead to display the extent to which it can truly affect a woman. Forcing women to go through with a pregnancy that they do not wish to have is blatantly ignoring the toll that it imposes on them.

Some might then claim that it is a woman’s fault she ended up in this situation, not the child’s. Firstly, we need to discuss all the situations in which a woman might consider aborting a pregnancy. Many of these situations are traumatic in that the pregnancy was a result of rape or incest. According to the Centers for Disease Control and Prevention (CDC), almost 3 million women in the U.S. experience rape-related pregnancy in their lifetime and about 18 million women have experienced vaginal rape. Sexual assault is in no way a woman’s fault and she should not have to suffer the repercussions of carrying her rapist’s child and dealing with the psychological toll that comes along with it.

It is also important to note that sexual assault is not the only situation in which abortion should be permissible. The reason for 74 percent of abortions is due to the fear that a child would interfere with a woman’s education or work, according to a 2004 study by researchers from Guttmacher Institute. Oddly the society that pushes for women to have children is a society that is not fit for mothers.  Women receive a “motherhood penalty” for having children. This means that they receive a pay cut from their work while they are on leave. Men, on the other hand, receive a “fatherhood bonus,” meaning they get an increase in pay when going on child leave. I do not quite see how a man should be rewarded for a woman’s pregnancy. I believe that a woman’s ability to give birth is worth far more than a man’s sperm. As a result, raising a child comfortably is quite expensive and a luxury that many unprepared mothers cannot afford. Pro-lifers do not promise the child a safe home with paid medical expenses. They do not ensure daily meals and a decent education. Pro-lifers only fight for the birth of a child, not the well-being.

But perhaps the most important aspect of the pro-choice philosophy is that women are able to decide what is best for their bodies and their lives. Every woman has a different and valid reason for whether she chooses abortion or not; it is the rest of the world’s job to mind their own business. Many of those who oppose abortion do not fully understand what pro-choice means. To be pro-choice means that you can personally oppose abortion but that you would not impose your views onto other women. To be pro-choice means allowing every woman to have the choice of abortion, depending on what they believe is best for their life.

The biggest issue with the pro-life movement is that it inherently devalues women and reduces their purpose to bearing children. If pro-lifers truly cared about saving unborn lives then, instead of attacking abortion, they would promote the widespread usage of family planning and contraceptives. Furthermore, if we truly want to prevent many accidental pregnancies then we need to recognize that the issue stems from the man as well as the woman. A man can impregnate several women in a short period of time, while a woman is subjected to a single pregnancy for an average span of nine months. Why doesn’t the government encourage male vasectomies? Vasectomies prevent a man’s sperm from containing semen, therefore preventing pregnancy and, in consequence, preventing abortions. Vasectomies are also reversible: When a man and a woman decide that they are ready for a child, men can simply reverse the surgery. The reason this solution is not discussed is due to the plain fact that men have never been subdued to the same societal restrictions as women historically have.

The confirmation of Amy Coney Barrett is a representation of everything America is against—repression. Her confirmation puts reproductive rights at risk, and therefore, confines women to stereotypical gender roles. Abortion is about freedom of choice. And a person can not be free unless they are given full control over what happens to their own body.

The government must not only continue to enforce the legalization of abortion, but must further its financial, physical, and emotional support for pregnant women and mothers. Abortion bans threaten the health and safety of women across the globe. Pregnancy is not always a miracle; to some, it can be a punishment. We must treat our women as valuable citizens and allow them the decency of controlling their own bodies, as is allowed by our country’s constitution.