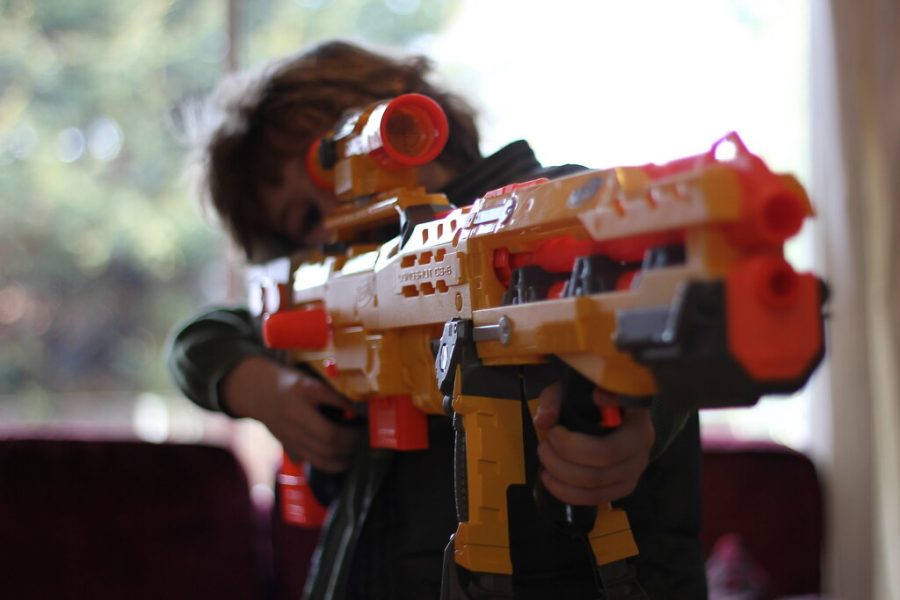 All nerf guns must be approved by the administrators prior to their use in an attack.

Two groups of three. Each one of them awaiting the appearance of the other. One kill—that’s all they need, and they will get it at any cost. An unsuspecting senior steps out of their car. From the bushes, all three assassins raise their weapons and fire those fatal foam bullets.

Every year, students from Monte Vista coordinate a single-elimination, Nerf gun battle available to all seniors who wish to participate. The admission requirements for Assassins—the name of the tournament—include a $25 entry fee, a group of exactly three seniors, a signed form acknowledging that you have read the rules of the game, and pictures of every gun you plan on using. Should a team win the tournament, they would earn the prize money collected at admittance and share it with the Assassins’ organizers.

This year’s coordinators, Alice Smith* and Megan Taylor*, have admitted that they have had difficulty planning. With over 200 seniors playing this year, it should come as no surprise that deciding which teams would battle against each other has been strenuous.

“The most challenging part was making the brackets,” Smith said. “We had to call former Assassins organizers and guys who were on the basketball team to figure out how to do it.”

Following this line of complications, Taylor and Smith have also had to deal with lying and cheating from players. Depending on the severity of a rule-break (a PDF of the official rule document can be found here), a team will either be given a strike—two strikes and the team is eliminated—or an individual player or team will be disqualified from the tournament.

“We’ve had to deal with people lying and [figure out] who’s telling the truth about what actually happened because a lot of people just want to stay in the game,” Taylor said.

While player Dorine Razeghi has not cheated, she has gone to extremes to ensure that her team—made up of seniors Sammy Nagubandi and Kiana Khatibi—can move forward in the rounds.

“We had to go to our opponent’s house and scout the area the day before it started to [decide where] we had a clear shot of hitting who lived there,” Razeghi said.

However, the supposed aggravation caused by this game is a facade. Students participating this year have expressed their gratitude for the break from the reality of COVID-19 and have abided by the Center for Disease Control and Prevention (CDC)’s guidelines.

“We didn’t get to do any senior activities [this year],” Nagubandi said. “I felt like this was the only senior thing we would get, and I thought it would be a fun way to get out of the house.”

Because competition escalates fairly quickly, Smith and Taylor continue to maintain that they are not associated with Monte Vista. Principal Kevin Ahern touches on this issue:

“Basically, [Assassins] causes all kinds of problems on and off-campus,” he said. “The school district has taken the position that it will not sanction [such events] for a number of reasons. Obviously, there is the distraction from school, but there is also the negative connotation of the game [in the community].”

Ahern goes on to explain that during gameplay, the Danville police department often has to respond to several calls from residents who are concerned because they see armed civilians “hiding behind bushes.”

However, he also acknowledges that this game is “meant to be fun. That’s why I have an open-mind towards it, but at the same time, we really need to adhere to ensuring that we stay safe.”

*The identity of this student has been changed to protect them from school consequences.