The fight for animals 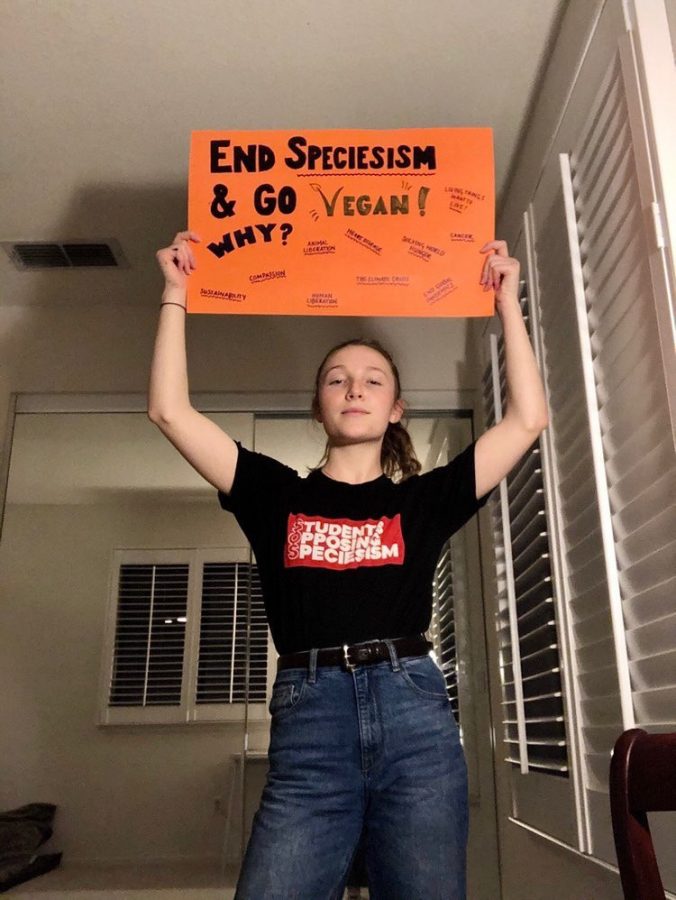 Senior Grace McClure is holding up a sign she made explaining the reasoning behind going vegan. These reasons include compassion, sustainability, and animal liberation.

Pigs are kept in tiny cages unable to roam the land.  Baby chicks are stacked in crates and taken away from their mothers.  If they are too weak, the chicks are thrown into trash cans where they are suffocated or beaten to death.  Cows are severely burned in order to be marked for identification.  This senior hopes to change how these animals are being treated.

Grace McClure is a student at Monte Vista and part of a group called Students Opposing Speciesism (SOS).  This group is an offshoot of PETA but is not associated with it. SOS gives McClure and other students the platform and resources to protest against animal abuse.

“A lot of what we do is raising awareness about speciesism [the exploitation of animals],” McClure said. “Once we start seeing that we’re not so different from animals, it opens up people’s eyes to the idea that we all deserve love.”

SOS has hubs all over the world, and McClure is leading one in the East Bay.  Their main goal is to liberate animals everywhere, and they are doing this through social media where they post about animal injustice, oppression, and speciesism.

“As humans are the ‘most’ intelligent beings on the planet, we have a duty to the other beings we share it with to protect them,” said senior Bella Wahbeh, another member of SOS.  “We should be protecting and helping these animals live the life they deserve.”

Animals have pain receptors and family bonds just like humans, but many refuse to accept this. SOS uses their platform to aid in debunking false theories animal industries spread that suggest animals cannot feel pain.

“Animals need protection and rights just the same as humans and anyone else who is facing injustice do,” Wahbeh said.

Veganism is an important part of advocating for animals.  McClure started eating vegan during the spring of 2019.  She has been a pescatarian since she was eight and was motivated to stop eating animal products once she discovered the negative effects the animal industry had on the environment.

Although her initial reason to go vegan was for the environment, McClure started to learn more about the harsh conditions animals face and the negative effects the animal industry has on humans. She took this knowledge to advocate for both animal and human rights.

“We use a lot of our land and resources to produce food for animals that only feed a small amount of people,” McClure said.  “We are struggling with world hunger, and if we didn’t do as much animal agriculture, we would be able to feed more people.”

One concern that prevents many from going vegan is the misconception that you cannot get the nutrients you need without meat and dairy.  This, however, is a myth, and McClure’s daily diet consists of many different supplements and substitutes to replace animal products.

“There are so many things you can do with tofu,” McClure said.  “You can make a chocolate pie, mac and cheese, roast it, put it in curry, make a scramble, and that’s just with tofu.”

While some believe that veganism is just a diet, McClure and SOS consider it to be much more than that.

“Vegan is a lifestyle,” McClure said.  “You shop vegan, you eat vegan, you use products that are vegan. It isn’t just about the diet.”