A presidency to remember 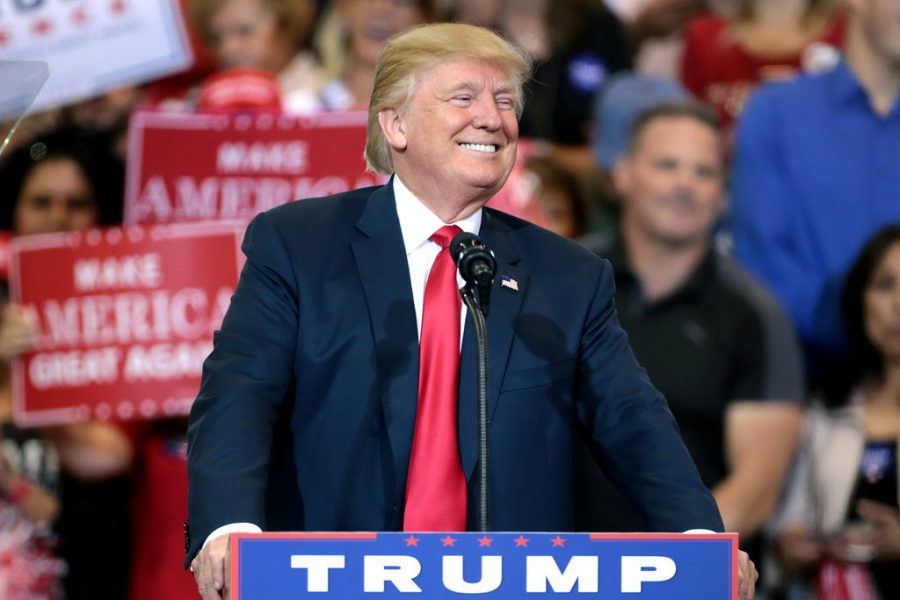 Donald Trump smiles like he is about to dupe millions of people into voting for him. The former host of The Apprentice took to Arizona to campaign in 2016.

Let me set the stage: The month is June, the year is 2015, a reality TV star is riding down a golden escalator in the Trump Tower Hotel. This man is none other than our soon-to-be President Donald Trump, who will make his second and unfortunately successful attempt at becoming the most powerful man in the United States.

The last four years have been difficult. In the beginning, although controversial, Trump gave a good run at changing things. The economy looked good, jobs continued to grow, and those luscious locks of his shined bright like a caterpillar after a damp rainfall. However, the initial utopia was not long-lasting.

He was surrounded by advisors made up of his rich friends and had a team of lawyers starring Rudy Giuliani (who seemed like he could fall susceptible to a Sacha Baron-Cohen mockumentary—oh, wait). It was only a matter of time before this ticking time bomb went off.

In January 2020, Trump received two briefings on a potentially deadly pandemic brewing on the horizon. So what did he do? Went golfing in Virginia, of course. Sidenote: He claims to shoot in the low 70s and play at the pro level. On another side note: Throughout his presidency, Trump made over 30 thousand false or misleading claims to the American people, and boasts about the level at which he golfs may add to that number.

I won’t go into the grim details of the COVID-19 pandemic—I assume most of you know them already. Instead, I will give you some of my favorite quotes from the former president during the development of the virus:

“We pretty much shut it down coming in from China,” Trump said in February.

“Looks like by April, you know, in theory, when it gets a little warmer, it miraculously goes away,” Trump said later in February.

“When you have 15 people, and the 15 within a couple of days is going to be down close to zero, that’s a pretty good job we’ve done,” Trump said at the end of February.

“So, supposedly we hit the body with a tremendous, whether it’s ultraviolet or just very powerful light, and I think you said that hasn’t been checked, but you’re going to test it. And then I said supposing you brought the light inside the body, which you can do either through the skin or in some other way…” Trump said during a press briefing in April. “And then I see the disinfectant, where it knocks it out in one minute. And is there a way we can do something like that, by injection inside or almost a cleaning, because you see it gets in the lungs and it does a tremendous number on the lungs, so it’d be interesting to check that so that you’re going to have to use medical doctors with, but it sounds interesting to me…”

Wise words from a man whose uncle was a scientist. Although I wish I could say that was all taken out of context from an episode of “South Park,” I can’t and those baseless claims did not help the American people when they needed it most.

Then came the election. You would think that after four years of rhetoric and neglecting to do anything about a deadly pandemic, losing an election wouldn’t be too outrageous an idea, but no. On Nov. 3, when Trump’s promised sea of red on the electoral map looked more like a small puddle, he took the respectable path and conceded like a true man of honor. Wrong. Instead, he took to Twitter.

Okay, so maybe he didn’t immediately accept defeat, but surely he must have eventually, right? Wrong again. The only logical steps now would be, of course, to send in Rudy ‘Hair-Dye-Dripping-Down-His-Face’ Guliani along with his entourage of misfit lawyers and lose more than sixty court cases over election fraud.

As I sit here writing this, I’m starting to get a headache from researching all the outrageously empty claims Trump and his law team have made. So in order to save you, the reader, from this pain, I thought we could take a break for a minute, and have a brief run-through of his one term as president.

Healthcare Plan: Didn’t have one.

Pandemic Plan: Also didn’t have one.

Cut your taxes: Maybe if you were rich.

Wall paid for in full by Mexico: Nope.

Beat the Fake News: Maybe in his mind.

End the War on Christmas: No (saying “Happy Holidays,” over “Merry Christmas” is far from an attack on Christmas).

Stop the Count: No.

Stop the Steal: No.

Win the Election: No.

And, of course, Drain the Swamp: Absolutely not. Didn’t even come close.

Alright, now back to the regularly scheduled kerfuffle that was Trump’s final days in office.              On Jan. 6, a snapshot of what America has become was shared throughout the world. Dressed in Viking helmets and Nazi gear, thousands of “patriots” stormed into the Washington Capitol building in hopes of “Saving America.” Five Americans died that day.

If by some means, you’re still reading this story, I commend you. Remember, even though this article is strongly opinion-based and you may not agree with anything that I say—America will prosper. The land of the free and the home of the brave will survive. When America has been at its worst, Americans have come together and pushed forward. With that, I will leave you with one last quote from former President Donald Trump to end this story properly.

“If I lose to him, I don’t know what I’m going to do,” Trump told his supporters at a rally. “I will never speak to you again. You’ll never see me again.”