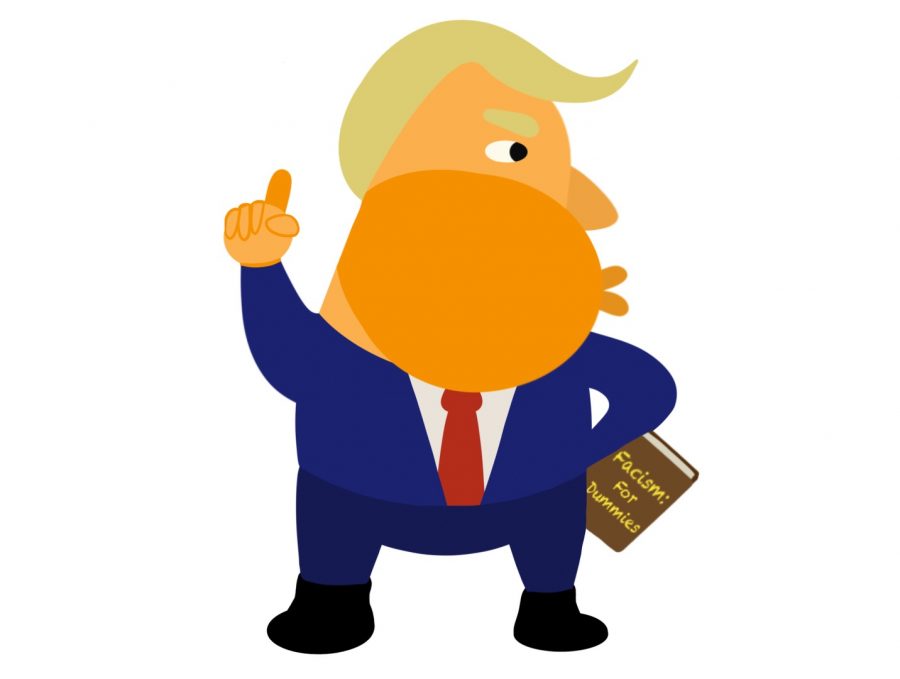 During his presidency, Donald Trump embodied ideals that many fascist dictators embraced in the past. Out of the 14 traits of a fascist leaders—as defined by Lawrence Britt—Trump clearly demonstrated 10 of them.

Four years ago, the greatest threat to our democracy was sworn into the American presidency, but his concession will not stop the uprising he initiated.

On Jan. 20, former President Donald Trump left the White House, leaving behind a monumental legacy. From his unconventional leadership emerged a movement unseen in American history: fascism, a political philosophy with its roots in ultranationalism.

While fascism’s place in world history is relatively limited, its impact is unforgotten. This ideology found its spotlight during World War II and solely motivated some of the worst crimes against humanity. In pursuing nationalist goals, Adolf Hitler’s Germany and Benito Mussolini’s Italy headed the internment and killing of various communities (the six million members of the Jewish community who died during the Holocaust are perhaps the most memorable group of victims).  These countries had previously been operating under weak democracies that were easily upset by charismatic leaders and violence. And while our democracy is far from fallible, Trump had his supporters believing otherwise.

When America inevitably finds itself battling fascist “patriots,” future historians will likely attribute the start of their attempted takeover to the riots that took place on Jan. 6 at the Capitol. However, Trump has embodied fascist ideologies since his first presidential campaign and currently exhibits most characteristics of a fascist leader, characteristics established by author Laurence W. Britt in his piece, “Fascism Anyone?”

While one or two of Britt’s outlined traits may commonly be found in leaders of the free world (i.e. powerful expressions of nationalism and identification of enemies as a unifying cause), a strong combination of them is unusual and alarming. The following are eight more qualities that fascist dictators share with Trump in terms of behavior, goals, and achievements.

Disdain for the Importance of Human Rights.

Illegal immigrants and asylum seekers detained in unsanitary facilities and deported at rates that prove extreme disregard to the condition of their homeland. His response to the Black Lives Matter (BLM) protests. The travel ban he enacted on foreigners from seven Muslim countries. His resentment for women’s reproductive rights. Discriminatory policies he tried to instill on members of the LGBTQ+ community (which include but are not limited to: barring transgenders from entering the military, allowing women’s homeless shelters to discriminate against transgender women, and updating the language of programs funded by the U.S. Department of Health and Human Services to remove nondiscrimination protections for LGBTQ+ people). These are but a few examples of Trump directly translating his apathy for human rights to U.S. policy.

Although military spending hasn’t increased by much since Obama’s second term (only by about $650 billion in nominal dollars), Trump’s rhetoric is what truly proves his want for America to be the greatest military power in the world. This idea pairs quite nicely with his America First agenda, especially because it means that America can guard its resources.

“Germany is not paying for it,” Trump said, commenting on his administration’s removal of American troops stationed there. “So why should we leave them [there] if they were not? We don’t want to be the suckers anymore.”

Trump has also repeatedly boasted about the size and strength of our military and wrote in a tweet on Jan. 5, 2020: “The United States just spent Two Trillion Dollars on Military Equipment. We are the biggest and by far the BEST [military] in the World!”

He finished the statement with the following: “If Iran attacks an American Base, or any American, we will be sending some of that brand new beautiful equipment their way…and without hesitation!”

Trump has threatened war with Iran several times, but he has made remarks like this to other countries, including North Korea. Such thoughtlessness would not be expected from someone who could start a nuclear war with the snap of his fingers.

If the sheer nature of these comments hasn’t alerted you of Trump’s militaristic goals, it may be worth your time to look at the Department of Defense’s budget during Trump’s presidency. Between 2018 and 2020, military spending totaled $2.1 trillion nominal dollars, almost four times what China—which has the second-largest defense budget after the United States—spent ($548 billion) in the same years.

Trump has a long history of making sexist remarks, whether they be targeted at a specific person (as with the example of Megyn Kelly when he said that she “had blood coming out of her eyes, blood coming out of her wherever”) or generalized to all women (the quote that comes to mind here is too crude to publish in a high school newspaper. In summary, the former president insinuated that he could grab and touch women as he pleased). While Trump has since dialed back on the vulgarity of such comments, his casual sexism persists. He has repeatedly criticized women for not meeting his outrageous beauty standards, rejected the experiences of victims of sexual assault, and questioned the qualifications of women in power.

In a more recent example of this behavior, he said of Vice President Kamala Harris after the 2020 vice presidential debate: “This monster that was on stage with Mike Pence, who destroyed her last night by the way, but this monster….” With the frequency in which Trump insults women, his dehumanization of a woman of color is just another slight addition to the list.

At this point, most Americans have become familiar with the term “fake news,” and for this, we have Trump to thank. While the former president told over 30 thousand false or misleading claims in his four years of office, he made a habit of labeling such media reporting fake news so that his loyal supporters would not be deterred from trusting Trump to be their most reliable source of information. I guess the only option you have when the First Amendment ensures freedom of the press is to do all you can to discredit it (and keep Sean Hannity in your back pocket).

In order to isolate America from the rest of the world, Trump has instilled a stereotypical fear of varying ethnic groups in his avid followers. On Mexican immigrants: “When Mexico sends its people, they’re not sending the best. They’re sending people that have lots of problems and they’re bringing those problems. They’re bringing drugs, they’re bringing crime. They’re rapists and some, I assume, are good people, but I speak to border guards and they’re telling us what we’re getting.” He proceeded to build his promised wall (unsuccessfully) on the U.S.-Mexico border.

When the world was stunned by terrorist attacks affecting countries across the globe, Trump spread the idea that followers of Islam and Middle Easterners were behind them. In reality, Islamic terrorist groups are made up of extremists who use Allah as an excuse to intimidate the rest of the world. Trump, however, disagrees, and said in a 2015 campaign rally, “There were people that were cheering on the other side of New Jersey, where you have large Arab populations. They were cheering as the World Trade Center came down.” He signed an executive order on Jan. 27, 2017, effectively banning residents of Muslim-majority countries. Most of the order was blocked by the Supreme Court, but the number of refugees and visa-seekers from Muslim countries declined during his presidency.

Obsession with Crime and Punishment

Trump did not attempt to hide his contempt for last summer’s BLM protests: “As we speak, I am dispatching thousands and thousands of heavily armed soldiers, military personnel and law enforcement officers to stop the rioting, looting, vandalism, assaults and the wanton destruction of property.” On June 1, 2020, the self-proclaimed “president of law and order” and “ally of peaceful protests” deployed teargas on such protestors to take a photo holding a Bible in front of St. John’s Episcopal Church.

During this time, Trump also made the following statement in support of overriding our First Amendment rights: “We love our flag and we don’t like it when we see people ripping up our flag and burning our flag. We don’t like it. We’ll see what we’re going to do about that, OK?”

Such behavior is a direct reflection of Trump’s willingness and, dare I say, eagerness to punish American citizens for exercising what is guaranteed to them by the Constitution, so long as they disagree with his fallacies.

Trump is the first president in American history to be impeached twice: first, for pressuring Ukraine to investigate the Bidens and the Democratic National Committee in exchange for military funding, and second, for inciting an insurrection at the Capitol. He was acquitted by the Senate both times.

Only those who have been living under a rock for the past few months are unaware of Trump’s attempt to disrupt the democratic process and take the presidency for himself. President Joe Biden won the 2020 election by almost seven million votes and 74 electoral votes, but that didn’t stop the incumbent from calling on his supporters to “stop the steal” at the Capitol Building on Jan. 6. While shocking, his behavior after losing the popular vote in 2016 and his reaction to questions regarding a peaceful concession during last year’s presidential debates were clear predictors of his involvement in such an event.

It is important to note that Trump’s individual attempts to corrupt our government have not overcome America’s system of checks and balances. But his authority has given voice to millions of Americans who feel they have been ignored in recent years, and that is what makes his power so terrifying. The Trump protests that have been occurring at Blackhawk Plaza since before the presidential election are only one example of this influence. The political debates that erupt at my dinner table are another.

Since Trump’s most recent acquittal, there looms the possibility that he may run for president again in 2024. So in the meantime, we can only hope that Biden bridges the gaps in our cracking democracy, that he “will work to be a president who seeks not to divide but unify. I won’t see red states and blue states. I will always see the United States.”