A Divided Nation: From the Capitol riot to the Biden Administration 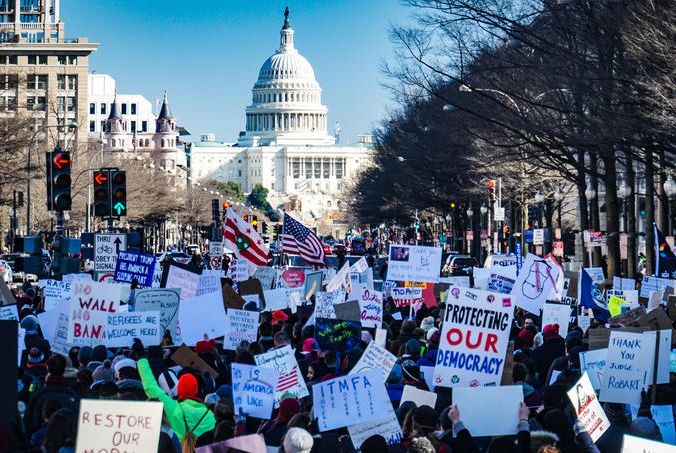 Biden supporters surround the U.S. Capitol on Jan. 20 after riots broke out there 2 weeks prior. The supporters raised signs in support of the new administration, hoping for a better, more united future.

On Jan. 6, political tensions erupted when Donald Trump’s supporters broke into the U.S. Capitol building as Congress was certifying the results of the 2020 presidential election.

Following this event, Democrats unanimously voted, along with 10 Republicans, to impeach Trump on Jan. 13, charging him with “incitement of insurrection.” One week later on Jan. 20, Biden was sworn in as the next president.

As these historical moments occur, the fractures that divide our nation widen. A Nov. 2020 Pew Research Center report said that the “2020 election [revealed] two broad voting coalitions fundamentally at odds.” While one side may view certain statements as facts, the other side may consider them to be lies.

“38 percent of Americans believe that this previous election was illegitimate, and there is zero evidence of that,” said Floyd Henry, a social studies teacher at Monte Vista. “There were 60 court cases. There were Republican secretaries of state and governors that certified this election and said everything was fine.”

In protest of the supposedly fraudulent election, a mob of Trump supporters broke into the Capitol building.

“I think their protest was to try and stop Biden from becoming president,” said Colin Nguyen, a junior at Monte Vista. “They believe that the election was rigged, and apparently, the best way to ‘stop the steal’ was to storm the Capitol.”

Eston Kuwahara, a self-identified libertarian student at Monte Vista, hoped for a president other than Biden. However, he conceded that Biden’s successful election bid was free and fair: “If [Biden] won the votes, he deserved to win.”

During a speech near the White House that took place before the riot, Trump repeatedly claimed that “Democrats attempted the most brazen and outrageous election theft.” He sent conflicting messages, asking his supporters to “stand strong” and “show strength,” while also calling for his supporters to “[march] over to the Capitol building to peacefully and patriotically make [their] voices heard.”

When his supporters arrived at the Capitol, violence ensued. Five people died as a result of the riot and dozens were injured. This event surprised many Americans, but some at Monte Vista had been expecting an outcry of some sort.

“I don’t think [the riot], though shocking, should come as a surprise to anyone who has been paying attention to the news and to politics over the last few years because the signs were there from the very beginning,” said Stephen Brooks, a research and seminar teacher at Monte Vista.

All who were interviewed directly condemned the violence, but there were disputes over the media’s depiction of Trump supporters after the riot.

“I don’t believe these rioters accurately represent those who support Trump,” Nguyen said. “Every side has extremists, and it is not fair to paint the whole group as malicious just based on a small, but loud, percentage of them.”

Trump also condemned the rioters and claimed that those who broke into the Capitol building were not his true supporters. However, House Democrats took Trump’s pre-riot speech to be a direct precursor to the Capitol Hill riot, a claim that has been contested by many Republicans. During the quick impeachment trial on Jan. 13, only 10 out of 211 Republicans voted to impeach Trump.

“I feel like the first impeachment just [happened] because [Democrats] were very upset, [and] then when it came to the second one, they were just trying to get [Trump] out so he couldn’t run in 2024,” said Connor Lewis, a junior at Monte Vista.

A supermajority—67 percent—of the U.S. Senate vote is required in order to convict Trump, and only then would he be unable to run for president in 2024. Currently, it seems unlikely that Trump would get convicted, as the Senate is evenly divided between both political parties and neither side seems willing to concede.

For now, those who wished for a different outcome in the 2020 presidential election will have to look toward the Biden administration. In the few days following his inauguration, he signed 32 executive orders and outlined ambitious plans, notably a more aggressive COVID response program than the previous administration.

“I want to see a stimulus for small businesses,” he said. “Those make up about 67 percent of the jobs…and [46 percent] of the economic revenue of the United States. That’s pretty important, especially in the COVID economy.”

Coming from the perspective of a teacher, Brooks prioritized a different goal. He stated that “it would be wonderful to make college free and accessible, or at least public schools,” an ambition widely held by Congressional Democrats.

The Democratic Party has already voiced that they plan to address many of the aforementioned concerns. Specifically, Democrats want to tackle COVID-19, make the economy stronger and fairer, provide quality and affordable healthcare, and protect the environment among other goals.

But there is another topic that has been at the center of Biden’s campaign: Unity. During his inaugural address, he stated that he wants to create a “more perfect union” and address the divide and hate tearing up the nation.

Brooks’s statement reflects Biden’s hopes: “We need to speak up and stand up against hate when it manifests….We need to always be vigilant and proactive to stamp down white supremacy and racism.”

Henry shared this wish for the future of American politics.

“Both parties need to lead by example and show that they’re working together on things because it’s been a lot of acrimony and divisiveness and polarization now for about 30 years,” he said. “But both sides are equally as culpable. They both need to stop with the name-calling and the mudslinging and the intransigence and actually [work] the way Congress is supposed to work.”

Moving forward, many at Monte Vista hope for a future of progress and open-mindedness. While Biden’s rise to power makes some wary and others hopeful, he has made the promise to lead America into this future: “This is our historic moment of crisis and challenge, and unity is the path forward.”