Mob of Trump supporters breach the US Capitol 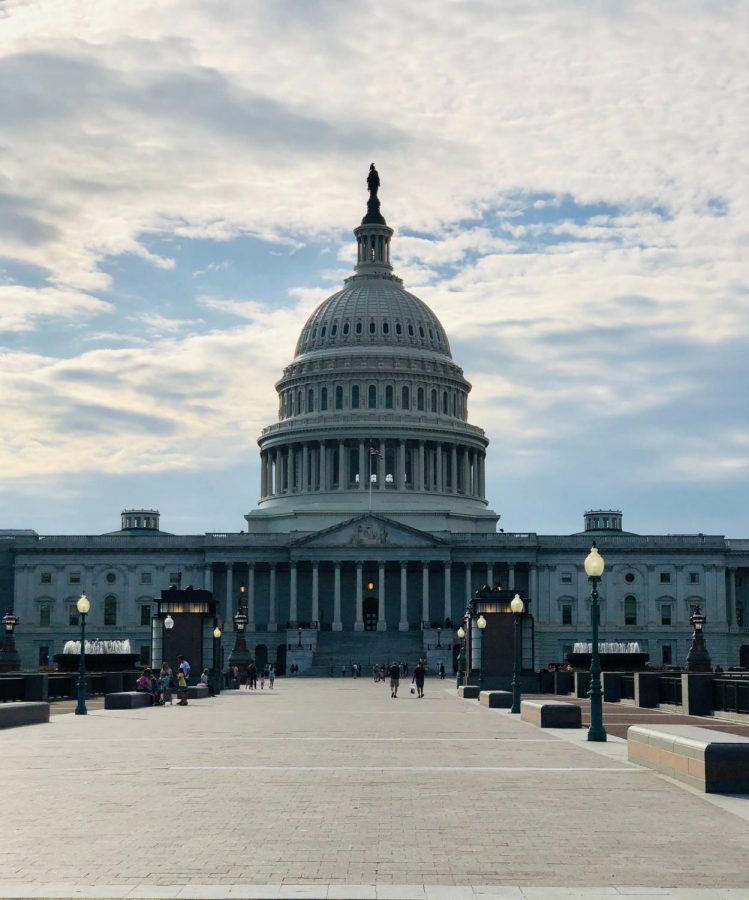 The US Capitol Building sits peacefully on Capitol Hill. In an attempt to disrupt democracy, rioters stormed the building on Jan. 6, 2021.

On Jan. 6, the United States Capitol was under siege for the first time in over 200 years during a joint session of the US Congress. The mob that overran security and flooded the rotunda of the Capitol was made up of thousands of President Donald Trump’s supporters, who delayed the official counting of the electoral votes.

After President Trump held a rally in front of the White House to “stop the steal,” he encouraged his supporters to march to the Capitol “to peacefully and patriotically make [their] voices heard.” However, the event quickly escalated, and his supporters breached the building, overwhelming the severely underprepared Capitol security.

Within the first few minutes of the breach, one woman was shot on Capitol grounds and later died of her wounds. Three other rioters and one Capitol police officer were pronounced dead in the following days. Dozens of other police officers who were involved in violent altercations with rioters are in hospitals with injuries. It is yet to be determined how much damage has been done to federal property.

According to the U.S. Department of Justice, 13 arrests were made on Jan. 6 in Washington, D.C., and 40 protesters are now being charged in Superior Court. According to multiple news sources, over 82 arrests had been made as of Jan. 7, and that number is growing as the Federal Bureau of Investigation (FBI)’s search continues.

Capitol police were alerted weeks in advance that protests could result in disorder but rejected help from the National Guard on Jan. 3. According to the Associated Press, the Justice Department’s offer for FBI agents was also declined as violence escalated. It wasn’t until rioters had breached the Capitol that surrounding police departments, agents from the Justice Department, and the Secret Service and Federal Protective Service came to help distill the chaos, but the damage had already been done.

A Danville resident who declined to speak to The Stampede attended Trump’s rally in the district and spoke to CBS News.

“I’m pissed off ‘cause I’m a patriot, and I love this country,” he said. “We have to fight for this country. Enough of the patriots standing back. We’re not standing down.”

Four hours after the mob broke into the Capitol, the protesters were cleared out of the Capitol Building and the counting resumed. Following the Capitol siege, there were few objections to the vote counts of certain battleground states, contrary to the Republican agenda going into the joint session earlier in the day.

Senators such as Lindsey Graham (R-SC) and Majority Leader Mitch McConnell (R-KY), who have expressed support for Trump in the past, withdrew such support in favor of democracy and America’s legal process.

When the US Senate reconvened after the riot, McConnell said, “Our nation was founded precisely so that the free choice of the American people is what shapes our self-government and determines the destiny of our nation—not fear, not force, but the peaceful expression of the popular will…. Criminal behavior will never dominate the United States Congress. This institution is resilient. Our democratic republic is strong. The American people deserve nothing less.”

Democratic leaders, such as House Speaker Nancy Pelosi, intend to file an article of impeachment against Trump for high crimes and misdemeanors “by willfully inciting violence against the government of the United States.” Trials will begin next week if Vice President Mike Pence and a majority of Trump’s cabinet members do not invoke the 25th Amendment to temporarily seize his power.