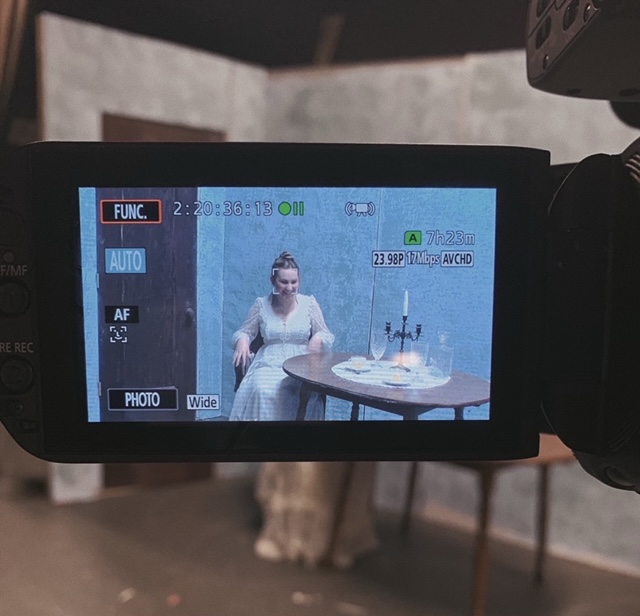 Although the social distancing mandates have been keeping everyone apart, Monte Vista’s drama program has continued to teach the students the ins and outs of performing.

The drama program consists of three lower levels of drama (each split into multiple sections), a stagecraft class, and play production. These classes usually operate differently—Drama 1 goes over the basics of acting, while play production and stage craft focuses on creating the two main performances hosted in the Al Gentile Theatre—but virtual drama has given them all a window into the world of film.

In order to keep students engaged in the drama aspect of the program, Chris Connor, the drama teacher, assigned them to film scenes in which the student would act, as well as direct and shoot.

“Coordinating it all has been crazy,” Connor said. ”It’s already hard when you’re trying to coordinate [49] people… When those people are working on nine different projects it gets really chaotic. And when you’re not seeing people… everything just takes five more steps to happen. We wanted to be able to produce some type of production and, no matter what, we were going to make something happen.”

For some students, the short film projects’ workload has been easier than in-person drama. Max Stuart, a junior in Drama 2, is one of them.

“Now we can film each other outside of school,” Stuart said. “When we’re recording our scenes, we just film each other doing our lines and put it together in one video. So I think that part is much easier.”

Charlie Mosher, a Monte Vista senior and member of Play Production, said that the change from live theater to film has been interesting to work with.

“With plays, you’re playing to an audience of 400 people at school, and there’s only one perspective they can see, usually far away,” Mosher said. “You have to project and you have to act with your entire body to portray everything that you want to. But with film, it’s very detailed; it’s very up-close and personal.”

Mosher has taken part in the drama program since his freshman year, but hadn’t previously worked with film for the class.

“I haven’t really done much with the camera so it’s definitely interesting to see how you can create a story with it,” Mosher said. “Because, with a camera, you can direct the audience’s perception, and bring out feelings by capturing or framing different relationships or emotions.”

This foray into film has introduced some students to a new aspect of drama otherwise unexplored in the school’s program.

“Performing [live] feels different from acting in front of a camera,” Stuart said. “I think that is something I never would’ve noticed if I wasn’t doing distanced drama.”

Despite the overall zeal for filmed drama classes, the transition from live production to virtual has made students miss parts of live theater that socially-distanced films can’t replicate.

“I feel like live theater is very in-the-moment,” Mosher said. “It builds and changes over time… Whereas with film you only get one chance, then it’s suspended in time and you can’t touch it. I think there’s just a little bit less [energy and life] when it comes to film.”

Stuart agreed. “I’d say a lot of drama is definitely about being in person and interacting with other people. Online, we still have it, it’s just less,” they said. “There are certain advantages and disadvantages, and we just have to find ways around the disadvantages.

The drama program does not currently have concrete plans for performances. Unlike the Monte Vista choir, which has now had its first live-streamed concert and is currently planning its second, Drama has nothing set in stone.

The program’s short films are scheduled to be available to the public, and Connor said that they also will host 24-hour theater productions in which writers come together on a Friday night and write together until Saturday morning when actors and directors take the scripts to prepare them for live online performances that night. However, this is the closest that the program plans to get to live theater this year.

In keeping with Connor’s goal to not make plans, Monte Vista’s annual musical is not in production. Although the Monte Vista choir has been getting by with pre-recorded, edited-together videos, coordinating the filming of socially-distanced musicals presents a new challenge. Musicals require set design, costumes, singing, and dancing, as well as acting, a larger production than what choir has produced. Connor and Rosalind Neisinger, the choir director, have been in talks to create an “ode to Broadway” night, but the main issue is finding the rights to perform and stream any show.

“We have to find material that we’re allowed to do, and then we have to figure out a way to be able to do it safely and together,” Connor said. “And especially in a live situation, that’s the hardest part… doing it live with multiple people is a whole other story.”