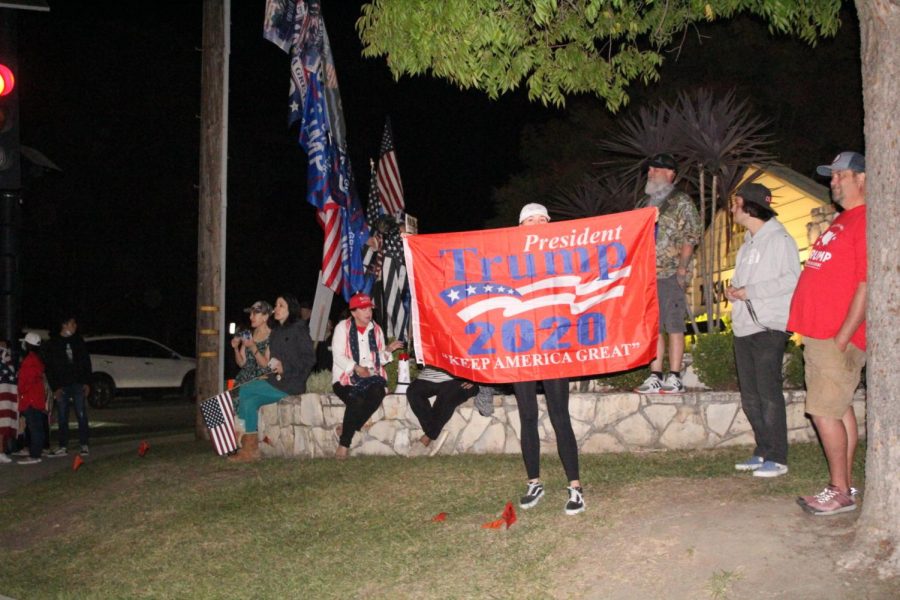 On Nov. 2, Donald Trump’s supporters took to the streets of Blackhawk to voice their approval of the president in a last minute attempt to encourage eligible voters to back him on Election Night. Following Joe Biden’s victory, however, claims of fraud and corruption — stemming from the White House itself — quickly ensued.

Democrats and most of the media view Joseph Biden as the uncontested winner of the 2020 Presidential election. However, after election pollsters turned out to be inaccurate—as they were in 2016—and voters mailed in their ballots in record numbers, President Donald Trump refuses to concede the election.
As election results are being further solidified, Biden holds the lead in the popular vote by a few percentage points, but Trump isn’t as far behind in electoral votes. The electoral college gives more representation to rural voters—who tend to vote for the Republican candidate—than urban voters. As a result, Trump was able to win the 2016 election without the popular vote. Now, Trump believes fraudulent votes in a few swing states—a state whose electoral votes could either go to a Democratic or Republican candidate—have allowed Biden to win.
“This is a case where they’re trying to steal an election,” Trump said. “They’re trying to rig an election, and we can’t let that happen.”
On election night, much of the media had most swing states leaning in Trump’s favor. He claimed premature victory and issued the following statement from the White House:
“We were getting ready to win this election; frankly we did win this election. We did win this election.”
However, within the next few days, key battleground states were called for Biden as mail-in ballots—which were overwhelming blue—were counted. As of Dec. 7, Biden leads by approximately 12,000 votes in Georgia, 10,000 in Arizona, and 20,000 in Wisconsin, according to the New York Times.
“Krebs, whose job was to make sure the election was secure, came out and said this was the most secure election we’ve ever had,” said Floyd Henry, a social studies teacher at Monte Vista. “And then the election officials in Georgia, the Secretary of State of Georgia, the governor of Georgia…all of them are Trump supporters, all of them wanted Trump to win, and all of them are saying the same thing, that there’s no fraud, that Trump lost Georgia.”
Similarly, Arizona and Wisconsin have recounted ballots and have certified Biden’s win. Even with these developments, however, Trump has not gone back on the idea that America was going to “have a fraudulent election,” as he speculated during the first presidential debate. He has since responded to his loss with lawsuits disputing election results in Pennsylvania, Georgia, Nevada, Michigan, and Arizona. Among other claims, Trump’s legal team has requested that state officials stop counting ballots and grant the public greater viewing access at ballot-counting. Most officials and legal scholars believe that these lawsuits, even if successful, will not be able to overturn the results of the election. Many of the election litigations have already been turned away by state courts.
“The current president’s term ends at noon on January 20, so there’s not really any gray area around that,” Henry said. “That being said, candidates aren’t required to concede for a transition to still happen, but it is, it is extremely rare for us to have a transition that is this contentious.”
Since Nov. 3, Trump has said that he will continue to refuse to concede, but he told reporters that he would leave the White House if the Electoral College votes Biden into office.
“I think the biggest complaint from both sides is that it undermines our faith in our elections and our electoral system,” Henry said. “I don’t know if there will be long term damage, I don’t know what it means for 2022 or 2024, but it’s not normal.”
Post-election polls report that some four in five Republicans believe the 2020 presidential election was not free or fair. With politicians offering drastically different viewpoints and the future makeup of the Senate still undetermined, it is unknown whether this extreme partisanship will continue to lead American democracy.