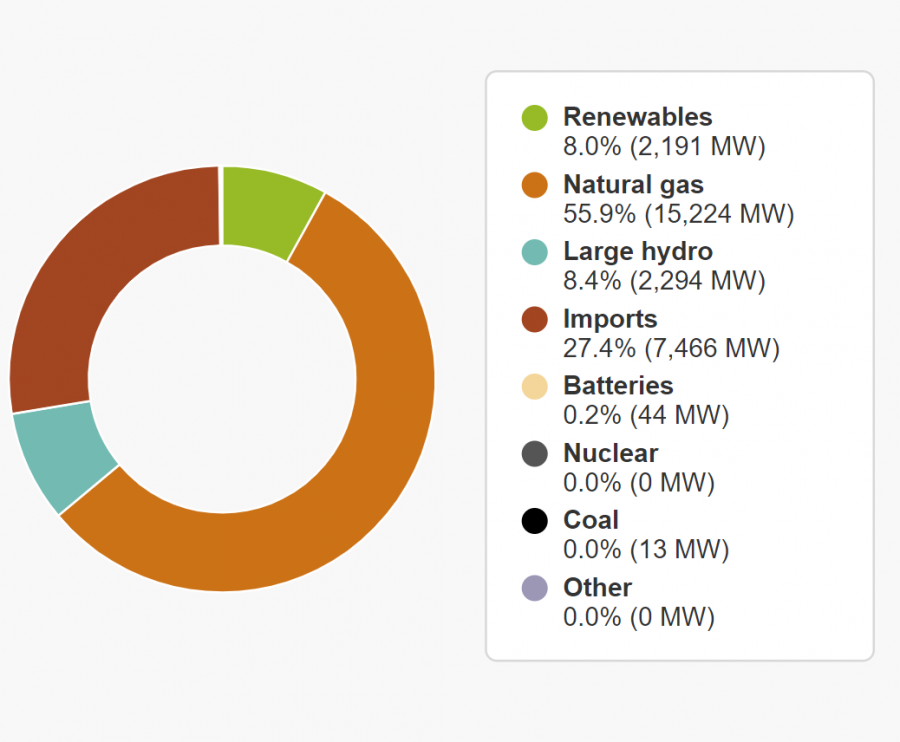 The energy supply distribution on an average California day. Natural gas and imported energy account for a significant majority of California's power supply.

In the last two months, millions of California residents, including those in the San Ramon Valley, faced blackouts after fires and heat waves swept across the state.  The evidence is clear and the experts have spoken: climate change is here and it’s happening now.

In response to these issues, some are calling for residents to conserve power, or even better, switch to renewable energy.  In contrast, others place blame on green energy, which they believe to be unreliable.  But before we jump to conclusions on the relationship between green energy and power outages, it’s important that we first address the facts.

“California is pretty green as it is, relative to other things, but we could be better,” said Oliver Tuggle, Monte Vista’s AP environmental science teacher. “We’ve got to stop putting carbon in the atmosphere and making everything warmer, hotter, drier, and windier simultaneously.”

However, when unplanned surges in energy demand arise, CAISO can only do its best to manage what it has from its plans.  Some argue that a switch to inflexible and unpredictable renewables have lessened CAISO’s control over its own power, and their claim isn’t entirely wrong.

During the August power outages, solar, nuclear, and hydropower performed well.  However, 1000 megawatts of wind power and 470 megawatts of natural gas power were lost.  Evidently, issues with both fossil fuels and renewable energy, in combination with an especially stressed power grid, created circumstances optimized for power outages.

In August and September, CAISO has dealt with system stresses through Power Flex alerts—calls for consumers to conserve electricity in anticipation of a power shortage—and rotating blackouts to prevent the grid from overextending.  These fixes, however, are no long-term solutions.

“Decentralization of [power] makes a lot of sense if you have the infrastructure to optimize it,” Tuggle said.  “If everybody had [solar panels] on their roofs, that would go a long way toward minimizing the amount we’d have to take from a publicly available pool.”

Green energy or fossil fuels can not be blamed individually for power outages, but instead a combination of both, in addition to an inflexible energy market system, are responsible for recent energy issues. More importantly, power grid issues are a manifestation of a deeper, complex issue of climate change.

“The [problem of] climate change is very simple, but it’s complicated to get things to change,” Tuggle said.  “It’s a really big issue and it’s a really difficult issue. It’s not like a simple solution to this.”

As individuals, we can do our part to combat climate change by managing our own power.  Conserving energy or switching to renewables are certainly great ways to reduce electricity consumption and relive the power grid of stresses that could prompt a power shutoff.  Moreover, we can all utilize our power as citizens to push legislators and policymakers to create environmental standards and reform our power supply management.  We need to unite as Californians, Americans, and as inhabitants of our globe to combat one of the biggest issues of the 21st century.