False promises and misleading claims: A timeline of Trump’s lies 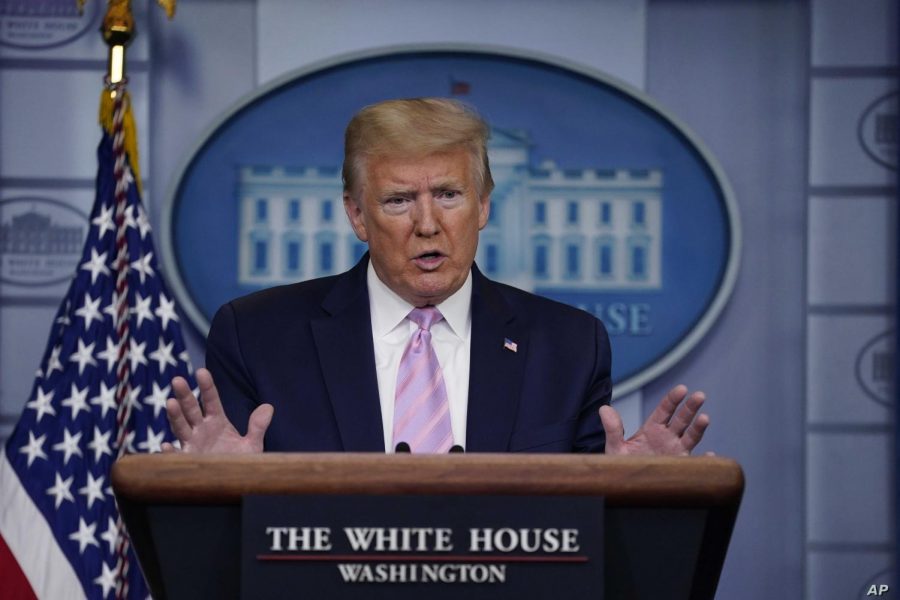 President Donald Trump speaks during a COVID-19 briefing on April 10, 2020 at the White House.

Many would agree that a president is supposed to be driven by honesty, logic, and empathy, but it seems as if Donald Trump missed the memo.

Trump took office on Jan. 20, 2017. Since then, he has told about 20,000 recorded false or misleading claims. The 2020 election is approaching quickly and given that Trump is one of the nominees it is vital that those who are able to vote do so educatedly.

President Trump has been labeled by the Republican party as a man that “speaks the truth.” I’m not exactly sure how breaking promises to his supporters is considered honesty, but it seems that Trump has no problem getting away with it. He promised to build a wall and make Mexico pay for it. He promised to abolish Obamacare. He promised to ban all Muslims from entering the United States. These are but a few of his empty promises and there are many more to explore.

Let’s start with the one thing Trump prides himself on greatly—the economy. He promised to grow the economy by four percent each year he was in office. Not only has the economy never grown by four percent, but the best performance he has had was in 2018, when the economy grew by 2.9 percent. Many conservatives assume he is the reason the economy is “great” when in reality it is due to his predecessor, Barack Obama. Trump did not build a great economy; he inherited it. President Obama took a ten percent unemployment rate and dropped it to 4.7 percent. This rate dropped slightly to 3.5 percent under President Trump by 2020. In the last two years of Obama’s second term, he raised the annual median household income by $4800. This is over three times the $1400 increase during the first two years of Trump’s term. The average quarterly growth under Obama was 2.4 percent, similar to Trump’s 2.5 percent. The growth in Obama’s term continued under Trump.

Furthermore, partially due to the way Trump handled COVID-19, the United States went into a great recession. The unemployment rate increased from 3.5 percent to 14.7 percent and the U.S. GDP fell at a rate of 33 percent. Some argue that this is due to the natural cycle of capitalism, but it could have easily been avoided. According to a study from Columbia University, if Trump had enforced social distancing measures one week earlier in March then roughly thirty six thousand deaths could have been prevented. And if restrictions were placed two weeks earlier, nearly a million cases would have been avoided as well. Because of this, we would have been in lockdown for a shorter period of time thus reducing the United State’s economic losses.

President Trump held back on putting the country on lockdown due to his promise that the coronavirus would “disappear overnight.” Eight months, two hundred thousand deaths, and one positive test for the president later, he insists that he took the pandemic seriously from the beginning. Pardon me, but I was unaware that seriousness was exemplified by delaying the declaration of COVID-19 a national emergency. I must also be mad to believe that tweeting that a deadly virus is “very much under control” indeed does not do anything to solve the problem. The minimization of the state of the virus gave citizens a false sense of security which many conservatives deemed necessary for reducing panic. The deaths of American citizens should be something that is taken seriously. There is no time to downplay a lethal virus. Who is going to tell our president that he can not simply manifest the disappearance of unemployment, a virus, and a recession by posting a few tweets overflowing with solecisms?

If Trump were not as stubborn as he is, he would have listened to the World Health Organization in January, placed America on lockdown sooner to reduce the spread of the virus, and made wearing masks a national mandate. On May 8, Trump even stated that COVID-19 is “going to go away without a vaccine.” Dr. Anthony Fauci, physician and director of the National Institute of Allergy and Infectious diseases, has declared several times that the pandemic will not simply disappear, as Trump constantly claims. The only effective way to get rid of this virus is through a vaccine, which Fauci says might be developed by November or December. When this precedent seemed to set in, Trump stated in September of 2020 that, “We will have manufactured at least 100 million vaccine doses before the end of the year, and likely much more than that,” implying his reliance on a vaccine. Trump has loosened restrictions based on the idea that one will come soon. Even if a vaccine is developed as early as November, it still has to be approved and distributed to every single citizen. This process could take up until summer of 2021. So to decrease the number of cases until a vaccine is ready, Trump should be focused on placing more restrictions instead of less.

As we now know, Trump is not qualified to be making decisions regarding science, yet he continues to. Trump went from calling climate change “mythical” and a “hoax” to claiming that “the environment is very important to [him],” and he has even gone so far as to say that he is an environmentalist. His actions do not align with his words, however. Trump withdrew from the Paris Climate Agreement, in which the U.S. and 187 other countries pledged to keep global temperatures from rising over two degrees Celsius. Some conservatives argue that this was due to economic reasons and a pragmatic mindset. However, the costs of biodiversity loss, pollution, and running out of natural resources are greater than the economic ‘burden’ the Paris accord would have on citizens. Trump stated that remaining in the agreement would cost the US economy “$3 trillion in lost GDP and 6.5 million industrial jobs.” But America could reach the Paris agreement’s goals with a lower carbon tax rate in less time than he had originally presumed (which was 2035) and the US GDP would be negatively impacted by only 0.1 to 0.35 percent until 2025. He has also tried to replace the clean power plan which works to limit carbon emissions from coal-fired power plants. His replacement plan eases restrictions and allows states to form their own plans instead. It has been estimated that this plan will lead to 1400 additional deaths due to air pollution. The Trump administration also repealed standards that required oil and gas companies to monitor and limit methane leaks. This decision could prompt an additional 5 million metric tons of methane emissions. This should not have to be said, but we need a president that effectively responds to science. I’m sorry, Mr. President, but if you do not start helping the environment then there is no longer going to be an Earth for you to golf on.

One would assume that a presidential example would be there to encourage the American people to fulfill their civic duty of paying taxes with complete integrity. Unfortunately, we are wrong to do so. He paid $750 in federal income taxes the year he won the election and he paid another $750 his first year in the White House. The average American pays around $8000 in federal income taxes every year. Over the last 20 years, Trump has paid about $400 million less in these taxes than the average citizen in the top one percent. This is largely due to the fact that over the years he has lost a lot more money than he has made. But finding loopholes that keep him from paying his taxes does not make him a smart businessman. When billionaires, like Trump, do not pay their taxes, the rest of America has to cover for them. Taxes pay for our schools, roads, military, and infrastructure. Tax money supports government workers and firefighters. It funds public parks and libraries.  As president, he should exemplify the importance of paying taxes to the American people.  His words once again do not coordinate with his actions, and in January of 2016 he stated: “I have very big returns, as you know, and I have everything all approved and very beautiful.”

To finish, let’s talk about the biggest facade that Trump has embodied to date: his support for the LGBTQ+ community. Trump has claimed that he is “the most pro-gay president in America.” I wish that this were the case, but, unfortunately, records show quite the opposite. The Supreme Court permitted Trump’s policy on banning transgender people from joining the military and Trump issued a waiver to the Health and Human Services Department that allows adoption agencies to discriminate against LGBTQ+ couples. Trump also plans on repealling the section in the Affordable Care Act that protects transgender people from discrimination in healthcare. The bare minimum that any president should have to guarantee to the public are equal rights for all people — regardless of sexuality, race, and gender. Trump has not been able to follow through with such a simple task, though.

Our president does not have the best track record in honesty. As American citizens, we are supposed to be standing on the land of the free and home of the brave, but under Trump we are getting farther and farther away from this reality. But don’t fret. The greatest tool the American people have is ready to be utilized: the vote. And before one does so, I urge them to choose the candidate that leads with integrity and not one whose most prominent trait is their lack of veracity.