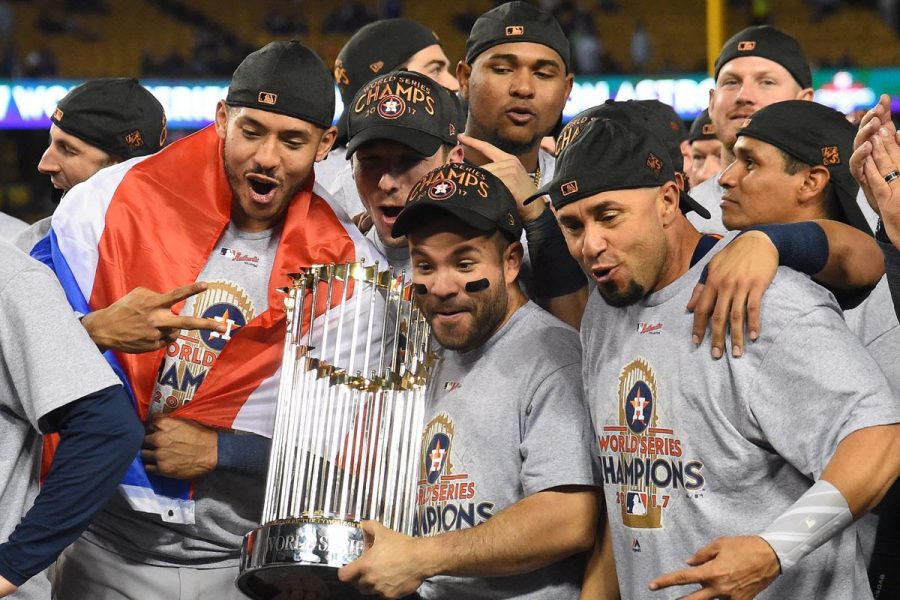 Houston Astros players hoist their trophy high in the air following their 2017 World Series Win. Players celebrate as they have just won their first-ever World Series, it would later come out that they cheated their way to becoming champions.

The scandals first started with the Black Sox in 1919, when the 1919 Chicago White Sox bet on themselves to lose in the World Series. Then, in 1989, Pete Rose was penalized with permanent ineligibility from baseball amidst accusations that he gambled on baseball games while he played for and managed the Reds. More recently, the Deflategate scandal, when Tom Brady ordered the deliberate deflation of footballs used in the Patriots’ victory against the Indianapolis Colts in 2014.

And now, Major League Baseball (MLB) has been caught in a cheating scandal. The Houston Astros were accused of using an outfield camera, a code-breaking system, and a trash can to steal signs.

On Nov. 12, 2019, ex-Astros pitcher Mike Fiers reported to The Athletic that the Houston Astros electronically stole signs in the 2017 World Series.

“That’s not playing the game the right way,” Fiers said. “They were advanced and willing to go above and beyond to win,”

Immediately after Fiers reported his statement to The Athletic, the Houston Astros organization began an investigation, cooperating with the Major League Baseball organization.

Although the idea seemed far fetched at the time, media circulation began to prove the Astros guilty. Some Los Angeles politicians would go as far as to say the rings should be returned to their opponent in the Los Angeles Dodgers.

Ultimately that idea seemed to the extreme, however, after years of circulation the Astros organization was fined five-million dollars (the maximum a team can be fined) and lost future first- and second-round draft picks. As well, general manager Jeff Luhnow and manager A.J. Hinch were suspended for one year. The organization fired the two long before the suspension would be implemented.

As of now, the rings appear to be staying with the Astros, but Monte Vista Principal and an avid follower of the sports community Dr. Kevin Ahern described the championship as “tarnished.”

“It won’t look good when looking back on the championship for the Astros,” Ahern said. “It was unethical and totally unfair for the opposing teams.”

The Astros organization admits they cheated during the 2017 and 2018 season and that it was their front office that initiated it. The Wall Street Journal reported that the Astros used a “codebreaker” program, which helped the team figure out what sign led to what pitch. That later notified employees to bang on trash cans to inform the batter which pitch was coming.

“Baseball is their life and they want to win,” Ahern said. “But there is a line and the Astros went way across it.”

Many players around the league and former players that played against the Astros are outraged by the scandal. Mike Bolsinger, a former pitcher for the Toronto Blue Jays, is the first player to sue the organization. Bolsinger is suing the Astros $31 million saying that the team changed the course of his career and is looking to donate the money to Los Angeles charities focused on making children’s lives better.

“I don’t know if I’ve had a worse outing in my professional career,” Bolsinger said. “I remember saying, it was like they knew what I was throwing.”

Bolsinger was the first player to take action and will most likely not be the last one to sue the Astros.

“If you have to use a camera, that’s way too far,” Monte Vista PE teacher Craig Bergman said. “Everyone is looking for a leg up.”

Ultimately time will be the only factor when regarding how the championship is viewed, as media grapples with its shock. But one thing is for certain: Technology has furthered cheating and will continue to do so as time develops.

Players around the league are furious by the Astros and the MLB commissioner Rob Manfred. The players are mad about how the Astros were punished, they thought they should’ve lost the trophy with lengthy suspensions. Mike Trout, Cody Bellinger, and LeBron James are some of the athletes that have made comments about the Astros and Manfred.

“Cheating is forever, and will never change if a team finds a way they will do it,” Bergman said. “It’s a money business. If a team wins a championship, they get fame and money, and everyone wants that.”