A new wave of coaches 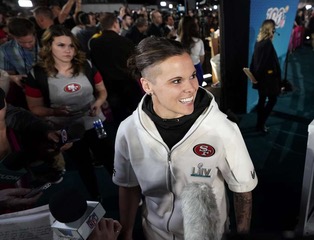 San Francisco 49ers assistant coach Katie Sowers talks to reporters ahead of Super Bowl 54 at Marlins Park in Miami during opening night. The 49ers and Sowers ended up losing to the Kansas City Chiefs 31-20.

Societal norms have dictated that in men’s sports, a male has always coached, but a new surge of feminism has introduced women coaches to the Major League’s.

Katie Sowers, an offensive assistant for the San Francisco 49ers, was just recently the first ever woman to coach in the Super Bowl. Alyssa Nakken, the most recent woman hired, was hired Jan. 16, 2020 by the San Francisco Giants. Similar to Sowers, Nakken is also an assistant coach and the first female coach in Major League Baseball history.

Seven years ago, not even a single female was a coach in any male professional sport, and now there are four. This is notable news for the sports world in breaking the gender barrier.

“They are breaking the gender barrier and inspiring millions of girls,” freshman sports fan Ethan Weiss said. “I think this is just the start and we will see more hirings in the upcoming years as a ripple effect”.

Sowers recently appeared in a Microsoft commercial that promoted the new Surface Pro 7. The commercial showed Sowers love for football at an early age and how she enjoys coaching.

“All it takes is one (female coach), and then it opens the door for so many,” said Sowers in the new Microsoft commercial.

Sowers, who recently lost the Super Bowl to the Kansas City Chiefs in heartbreaking fashion, is looking to rebound from this defeat. But a female coaching a men’s football team in the highest stage, the Super Bowl, is a progressive step for the sport and fellow females trying to become a coach in men’s leagues.

Jennifer King is the latest female hiring. She is set to be a full time offensive assistant for the Washington Redskins. This is significant as King is the first African American female coach in NFL history.

“I think that people make stereotypes about what a female can and can’t do, but I feel like the tables are turning in favor of these female coaches,” freshman lacrosse player Taylor Howe said.

Only time will tell if the men’s leagues will have more female coaches, but teams have taken chances and hired females to coach. The San Francisco 49ers and Sowers are the first and definitely not last female coaching run to the championship.

“Each coach has their own style of how they like to coach,” Howe said. “Since they are not the traditional coach for men’s teams, I feel like they would bring new things to the sport that has never been thought off, resulting in more female hirings around all leagues.”