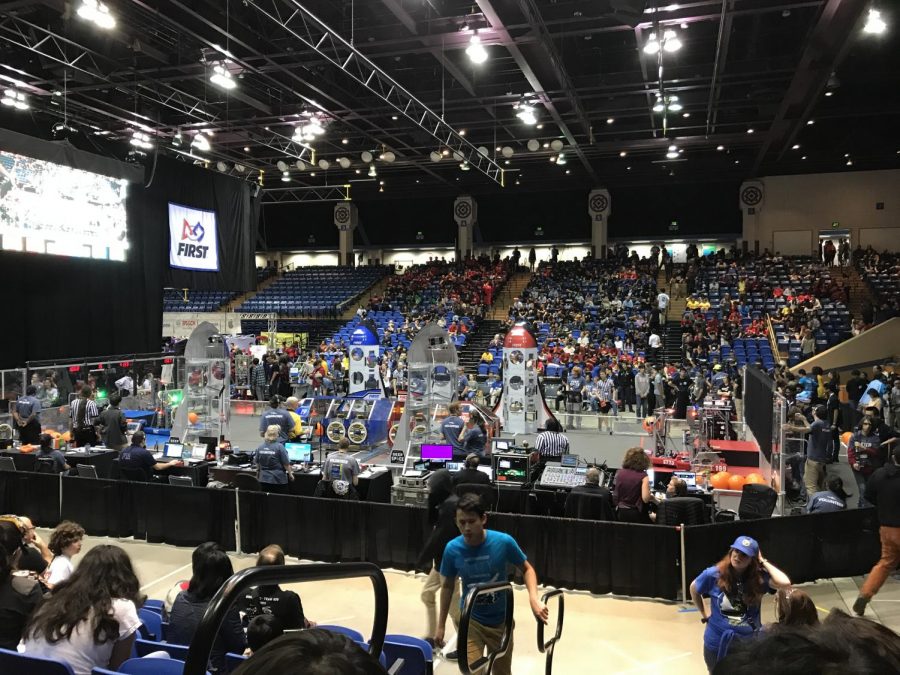 While everyone else is off to the races after school, one dedicated team stays until 6 pm most days of the week. They build, program, test, and compete. It’s a large team collaborating on a challenge.

This team is the Red Tie Robotics team. Red Tie Robotics competes in the FIRSTⓇ Robotics Competition(FRC). FRC is a global challenge where teams build robots with certain restrictions to complete tasks in a given time frame.

Red Tie was founded in 2004 and has been representing Monte Vista since. The team has won many awards, such as Excellence in Engineering, and they have also competed at the FIRST World Championships in 2012 and 2015. The FIRST World Championship is a celebration of the work of all FIRST engineers and participants, and competing in the tournament is the goal of many teams worldwide.

With over 3,500 teams and 90,000 students internationally, Red Tie Robotics prepares every day to develop the robot in order to compete with the other teams at tournaments. The season lasts from January to May, but competition preparation starts long beforehand. The kickoff, or beginning of the challenge, was on January 4th, and in six weeks, competition starts. Competition dates range from the end of February to the beginning of April. Each tournament has around 16 teams.

“The robot is very complex with many different features inside, such as electric motors, air- pushing pistons, gear boxes, and many more,” Vranas said. “It’s about the size of a school desk, possibly taller, depending on the rules each year.”

This robot takes countless hours of effort, persistence, dedication, and resilience. And even then, nothing ends up perfect. The team meets three days a week plus Saturdays for at least two hours each time. Physics teacher Rodger Johnson is the supervisor of the team.

“We use Python as our programming language for the robot,” Sachdev said. “The robot also has camera sensors around itself to make decisions without people actually having to control it.”

Red Tie is more than just a robotics team. Hidden behind the gleaming metal project is the work of almost 60 people. While only a small number of people work on the actual robot, other aspects are crucial to the team’s success. The subgroup that works on the robot only consists of about six to seven people. But there are many other groups, such as the business group, that also contribute heavily to the team’s success. Financing is extremely important, as FRC is an extremely expensive competition.

These are just some of the expenses of the program. The costs add up to about $30,000 a season. As well as being next- generation engineers, the team also develops skills in business and financing as well as reaching out to the community.

One of their current sponsors is the Lawrence Livermore National Laboratory. Sponsorships range from a couple hundred dollars to a few thousand dollars. Accumulating money from many sponsorships helps the team generate the large sum of money.

The team has become a place for people to learn to work together and communicate, as well as have fun and enjoy the feelings of success. With the large team size, chemistry and collaboration becomes essential to the overall success of the team. Through the experience of working as a large team collaboratively, brainstorming ideas came with more variety. A member of the team who wished to remain anonymous, shared his experience working with the large group.

“With our subteams, it’s actually better with more people,” the student said. “Because with so many people working on the robot, we have more minds on the project.”

FIRST has a code of values to embody the friendly spirit of competition.

“We learned a lot of team skills, how to interact with other teams,” Vranas said. “We also learned to embody ‘gracious professionalism’, a core value of FIRST.”

FRC and other FIRST competitions for high schoolers including FIRST Tech Challenge(FTC), have been a source of development for students that want to continue their studies and profession in the engineering and programming route. Sachdev joined robotics with a similar interest.

“In [FRC], we work on real world applications,” Sachdev said. “And if you want to be a programmer, designer, or engineer, it would definitely prepare you well.”

Red Tie considers themselves a family that works together to achieve their goals.

“At the end of the day, we’re not here for the big trophies, we’re here to do our best and learn,” Vranas said.