What drives teachers to teach? 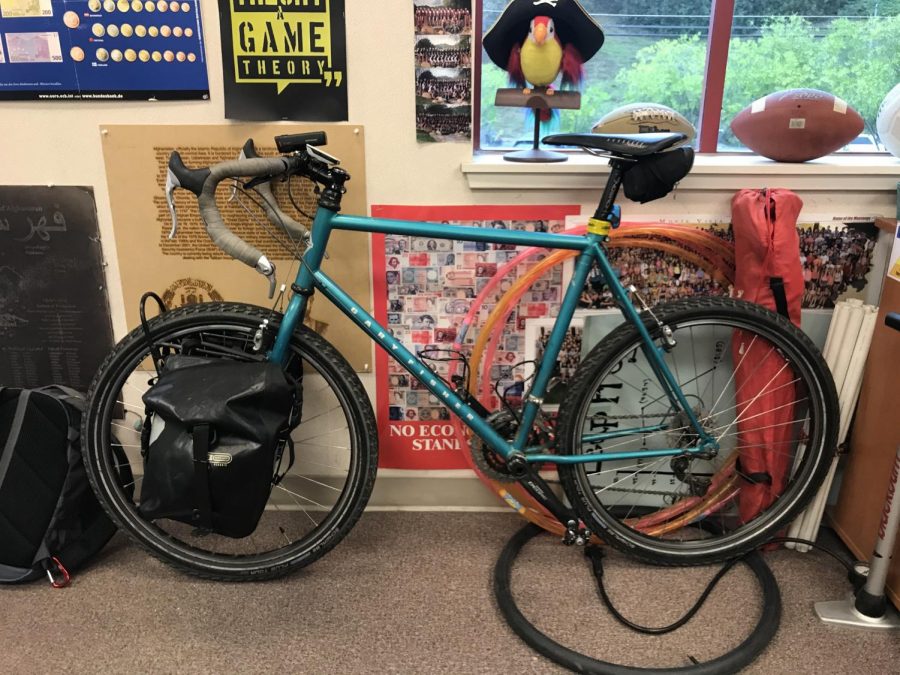 Blandino's "Tank" silently sits next to his desk during the school day for his students to admire. He bikes at least three time a week to school and it quite clear that has a passion for the activity.

The Monte Vista parking lots are filled with cars amassing millions of dollars. Students seem to take great pride in their forms of transportation and show them off. But what about teachers?

Yvonne Spilker is a math teacher at Monte Vista who doesn’t mess around when it comes to speed. It may come as a surprise to people, but she has one of the fastest cars in the lot. Her 2006 Dodge Charger Daytona is beyond compare. Having 350 horsepower, and reaching 60 miles in under six seconds, it was one of the fastest on the cars on the market in 2006.

With vibrant yellow base color and black racing stripes the car doesn’t fail to turn heads. According to Spliker, the Dodge community refers to her Charger as ‘Top Banana’.

“I needed a car with power,” Spilker said. “It just sails.”

And no. Spliker is not sailing down Hartz Avenue in ‘Top Banana, she is a law abiding citizen who would never speed. Although that’s not to say that she does not enjoy the speed that her Charger has. She explained how it was nice to have a quick car in order to be able to slip out of tight spots and out of the way of large trucks on the freeway.

Spilker made it clear that, “[buying the car] was mostly for safety,” and that she actually enjoys zipping past the slow cars.

Long time economics teacher Greg “Mr. Bike” Blandino has a slightly different way of transportation. On Mondays, Wednesdays, and Fridays, Blandino rides one of his five bicycles to school. According to Blandino, he rides on Mondays because it “gets him going for the week,” Wednesdays because “it’s hump-day” and Friday because “yahooo.” But one may ask, how does he choose which bike to take?

“It depends on my mood,” Blandino said. “But I usually take my tank. It goes anywhere.”

Blandino’s ‘tank’ of course isn’t a machine made famous by the first World War, but instead one of the names he has given to one of his bikes. The bike is a rugged tealish color with white taped handles and classic black rubber tires. Like an actual tank, his bike has a few gadgets on the handle bar like a speedometer. Blandino explained that he has had the bike for five years, but the frame (the main part of the bike) is from the distant year of 1993.

“I bought it for pennies off Craigslist and rebuilt it into the tank,” Blandino said. “It weighs about the weight of a tank.”

It is obvious that Blandino bikes as he  leaves his bike in his classroom as well as if you look at his shredded calves. ‘Mr. Bike’ still does drive cars, but has racked up some impressive miles on his bikes.

“They [his bikes] have a couple hundred thousand miles on them,” Blandino said. “My car has more though. It’s hard to go to Montana on a bike.”