The Golden State Warriors’ not so golden start 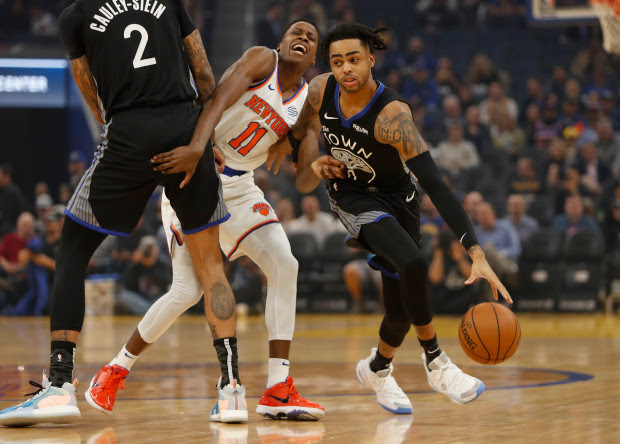 Golden State Warriors guard D'Angelo Russell brings his A-game during December 11ths OT thriller vs New York. The Warriors would go on to lose this game 124-122 in Over-time despite Russells 32 performance

Everything from Steph Curry’s law-defying circus shots, to Klay Thompson’s catch and shoot 3’s. And who could forget the back to back championships led under Steve Kerr. The Warriors have had a league defining run… but has it come to an end?

The Warriors have now fallen to the bottom of the western conference and have left Warriors fans with low hopes for the future. Following the departure of Kevin Durant during the last offseason, and the heartbreaking loss to the Toronto Raptors in last year’s finals Warriors fans have remained hopeful for the future.

Sophomore and Lakers fan Keniston Ytell had his own interesting take on the rise and fall of the Warriors. “Before they seemed unstoppable, but now they seem like a team that could give you trouble but has yet to execute on that,” said Ytell.

With all this going on some of the new faces of the franchise such as breakout rookie Eric Paschall and one-time all-star D’Angelo Russell have made efforts to step it up. But there is still an obvious unanswered hole in their lineup.

“I honestly had to search most of those guys up, I have never heard of a lot of them before,” Sophomore Warriors fan Nithin Thumma said. “They’re not the premier talent the Warriors are used to.”

With new faces, head coach Steve Kerr is looking to continue to grow as a team and pending the return of Steph and Klay, the new guys will have to hold it down. One of the new acquisitions, one-time all-star  D’Angelo Russell, has stepped up in a big way and is currently averaging 22.3 points per game.

Although the rough start to the season hasn’t been one the Warriors had hoped for, some fans remain hopeful for what the future holds.

“I think the future is gonna be tough. “Ytell Said.”  I think they’re gonna find themselves at the bottom of the western conference this year, but then hopefully next year return to making the playoffs and be a potential contender once again.”

“I think the Warriors will be back in the playoffs next year… the team just needs to get healthier, the draft, and next offseason,” Thumma said.