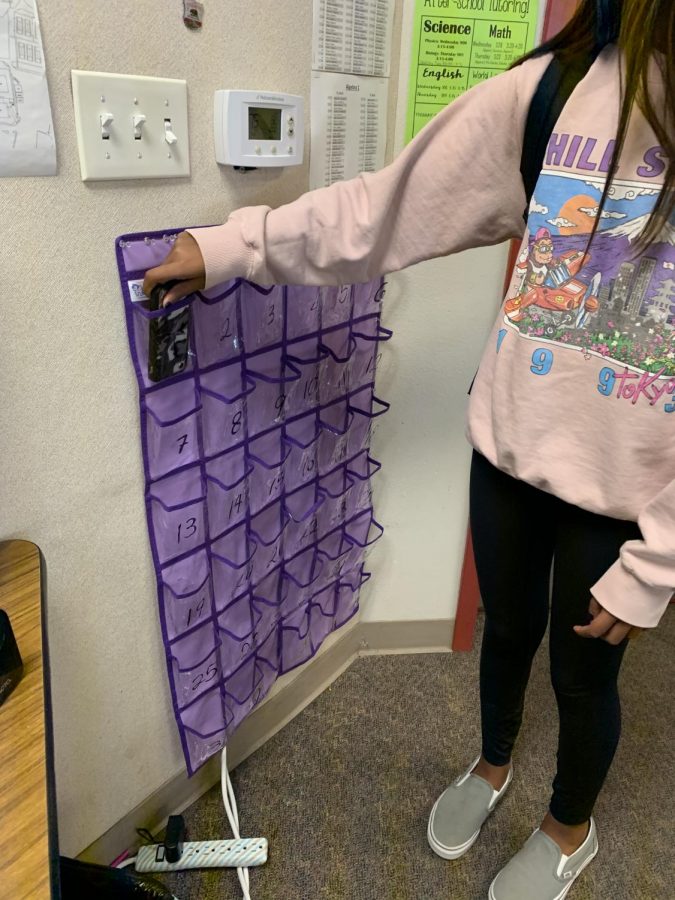 Freshman Avani Desai is putting her phone into the phone jail in Phoebe Roddewigs classroom before class starts.

Phone jails in Monte Vista classrooms have become an increasing trend in the past couple years, but they are not as practical as teachers would hope.

Phones are a tool available to most Monte Vista students, and if used properly, they can be used for research, and other academic enriching activities that are useful in the classroom.  Monte Vista’s principal, Dr. Kevin Ahern, agrees with this philosophy on phones.

“If [phone jails] are an effective way to make sure the students are engaging in their work, then that’s great,” Ahern said.

And yet, when used in an appropriate and engaging way, phones can be used for much more than just social media and video games.  These devices should not be taken for granted, and students should be allowed to use them for learning purposes.

When teachers take students’ phones, it causes some kids to have separation anxiety, which makes them feel uneasy. When teachers make them put their phone in the jail, it hinders them from focusing, disengaging them from their work.

“It gives you more of an urge to use your phone,” freshman Sachiko Anderson said.  “The more you can’t have it, the more you want it.”

This makes students feel uncomfortable in the classroom, an environment where they should feel comfortable in.

Many teachers take attendance by using phone jails, which is how they enforce the rules of the jail.  Some students, however, put other items such as calculators, phone cases, and even ancient smartphones into the jail, in hopes that the teacher does not notice.

The students that put other items in the phone jails are still able to have their phones in their possession, without disrupting others in class.

“For the most part, they [the jails] aren’t very effective,” sophomore Aiden Leslie said.

As phone jails began to become more and more popular a few years ago, teachers who did not have a phone jail bought one for their classroom.

“I’ve had a phone jail for two years, and I’ve been teaching for ten,” English teacher Kristina Zhebel said.

Many other teachers have also bought a phone jail within the span of two months to three years ago.

“I have seen an increase in them, and I think that some teachers have been successful, so other teachers are doing it,” Ahern said.

Most teachers’ goals are to eliminate the distraction of phones by purchasing phone jails, but students can achieve more by using their phones than letting this useful piece of technology sit on the walls of their classroom.

Principal Ahern would ultimately like to see technology used for good in classrooms to aid students in their learning.

“We want to have more tech in our classrooms,” Ahern said.