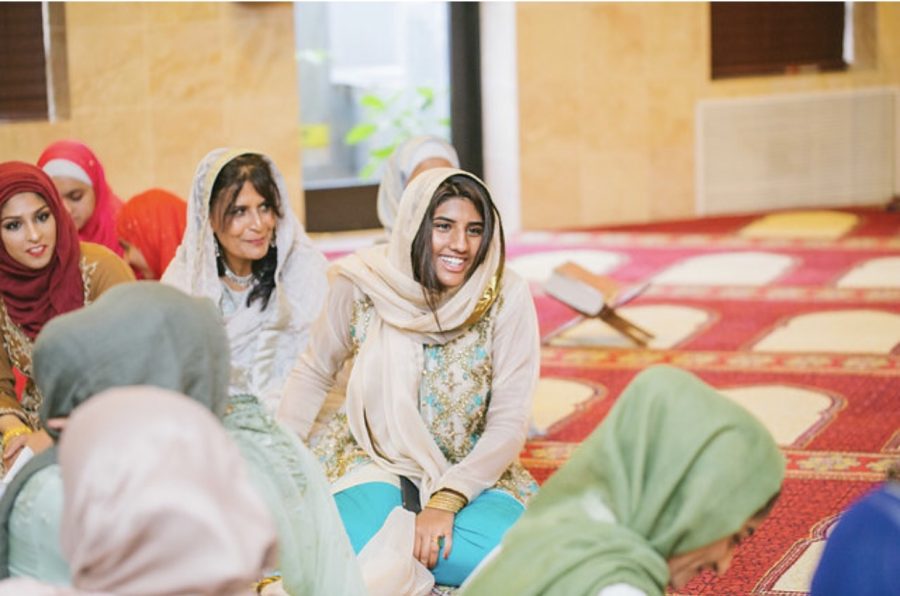 My mom and I wearing the traditional scarves inside the mosque. It is required to cover your head when you have entered a mosque.

“I didn’t immigrate halfway across the world and give you this name for it to be butchered and mispronounced,” my mother said.

To be fair, to be given this name in America, I thought she should have expected that. Manahil doesn’t roll off the tongue as easy as most. But as I grew older, I realized she meant: to not be submissive or passive when people asked me if they pronounced my name correctly, or allowing people to give me an “Americanized” nickname to make it easier for themselves. She reminded me that she was adamant about giving me a name that was unique and would remind me of my culture and roots every single time I spoke it or wrote it.

Learning to balance both aspects of my identities was a long and hard process. I was never American enough for my peers or Pakistani and religious enough for my community and family. It started with my name and then with other smaller ideas and concepts, ideas so trivial that a majority of my peers didn’t see or understand the weight and complexity of it.

A practicing Muslim follows the code of conduct regarding cleanliness and modesty. Eating pork or gelatin is considered non-halal (sinful), which is why I have never eaten a BLT or pepperoni pizza or everything that my peers rave about and crave. Eating out with friends has become a dreadful process.

With the constant pity from my peers over something as simple as bacon I felt awkward and isolated. This feeling became so normalized throughout my experience at school where Caucasian culture was so heavily predominant.

This feeling was consistent and continued throughout choices regarding fashion and style.

It could have been 75 degrees and yet my skin never felt the same sun burn my peers complained about. Long sleeves and pants were almost always questioned and would never go unnoticed in a crowd of girls with shorts and a tank top.

I found it difficult to feel normal at any formal school event with elegant dressing. I have never felt my legs bare and shoulders exposed. I could never wear the same tight-fitting, short dresses that all the girls were clothed in. It was for this same reason I’ve never been to a homecoming or school dance.  I wouldn’t feel comfortable in my own skin let alone the dress and found it hard to give an explanation to my non-Muslim peers why sleeves were sown on and I had no shape to match to my body.

While I didn’t pray five times a day, there was this unexplainable urge to just follow what had been preached and practiced since I was born. The eyes of members within my community, my parents or religion had a lot more weight and intensity to it in comparison to my peers.

Nonetheless, it wasn’t easy to be surrounded by my peers everyday and keep a good head on my shoulders. I found it difficult to remain neutral when small details like that what I ate or wore hindered the process or feeling like a normal American girl.

Only after realizing the effect of these restrictions in the life I lived outside of the mosque did  I begin to contemplate why I sacrificed everything that made me exactly who I am to just “fit in”, “blend in” or go unnoticed.

I was so taken aback by how the people within my community were willing to be the black sheep in America for the sake of a religion and culture that not many people respect or understand. I too wanted to embrace my identity.

In order to truly accept and make a change in how others saw me or what they chose to see, first I had to accept being a black sheep and nurture both my American and Muslim-Pakistani side. Only after stepping out of my comfort zone in both my mosque and at school, I realized the key to getting past the struggle of being a first generation American entirely relied on the effort I put into maintaining a balance of every positive value I had learned from both these sides.

With this I can now confidently tell you how my name is truly pronounced and written. I am no longer beating around the bush and tripping over my tongue. Others will no longer have to wait to mispronounce my name and misplace where I come from. The first time they hear it will be the last time they question who I am.