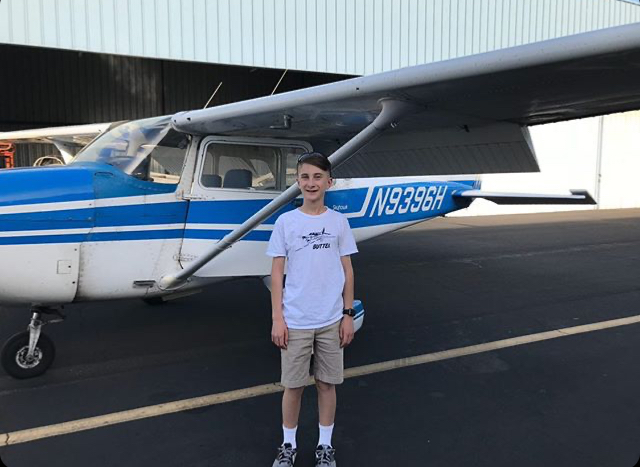 McCumiskey smiles before his first-ever flying lesson. He flew over Freemont with his flight instructor in a Cessna 172 Skyhawk.

Most Monte Vista sophomores’ minds are focused on getting their driver’s license, but one student is set on something different: his pilot’s license.

Sophomore Brian McCumiskey is a pilot-in-training. This self-proclaimed ‘Airplane Freak’ spends his free time in the air, over a faraway patchwork of buildings, trees, and beige-colored stretches of earth, his view streaked with clouds. McCumiskey has been taking flight lessons since last April, usually at the Livermore airport.

“Now that I’m getting closer to my sixteenth birthday, I fly a couple of times a month, and that’ll be increasing in the next few months,” McCumiskey said.

Once McCumiskey turns sixteen he’ll be able to do solo flights, which he’s looking forward to. But for now, flying is a major time commitment for a high school sophomore.

“One of the downsides is putting school before flying,” McCumiskey said. “Especially during finals week: you’ll have a perfect schedule to do it, but you know that you’ve got to work on school. School will always take priority over [flying], at least until I’m done.”

McCumiskey’s family is supportive of his interests. His father once planned on becoming an airline pilot, but due to color blindness was not allowed to fly at the time.

“There’s a huge pilot shortage going on right now, which makes it a lot easier for me to get into the airlines when I’m older,” McCumiskey said. “The airlines are working on raising the pay right now, so it’s the perfect time to be doing this.”

But even with the high demand for pilots, this pastime comes with a lot of work. There’s a lot of background thinking and specific skills that go on behind the scenes of simply flying a plane. When in the cockpit, multitasking is expected. Eyes sweeping the skyline in front of him, ears hugged by a giant headset, McCumiskey must keep a calm  voice while talking to Air Traffic Control. It is crucial that he speaks clearly on air while also keeping a steady hand on controls.

When McCumiskey isn’t in the air, he’s still flying a plane- just on his computer.

“I have a flight simulator at my home that I fly all the time,” McCumiskey said. “People think it’s a video game- it’s not. I get actual flight hours for when I do it at home and it’s very, very realistic.”

Leo Futia, one of Brian’s friends and flight simulator enthusiast, has watched him use the simulator before.

“He tries to be as realistic as possible,” Futia said. “He’ll try and replicate the exact time the flight took off with the same weather. He also uses the exact runways that are currently in use at real airports.

McCumiskey spends a considerable amount of time improving his skills. Not only does he practice piloting, he also does work on the side that relates to planes and flight.

“He really enjoys looking up new things and understanding how airplanes affect the world around him,” said senior Kaley McCumiskey, his older sister. “He even takes the time to go to various airlines and to learn pretty much anything about it.”

Even with all the work he puts in, there’s nothing else McCumiskey would rather do.

“It’s definitely benefited me,” McCumiskey said.  “Being able to get away from all life and just to be present in flying. When you’re up in the air, you’re trained to not think about anything else other than flying the plane. You don’t want to get wrapped up in anything.”

In the future, McCumiskey looks forward to doing what he loves most- spending time in the sky.

“It’s a great privilege to do what I’m doing,” he said. “My favorite part to think about is that I’m not going to be working in an office when I’m in my older years. My office will be in the clouds.”