Cheerleaders aren’t the only ones cheering at MV 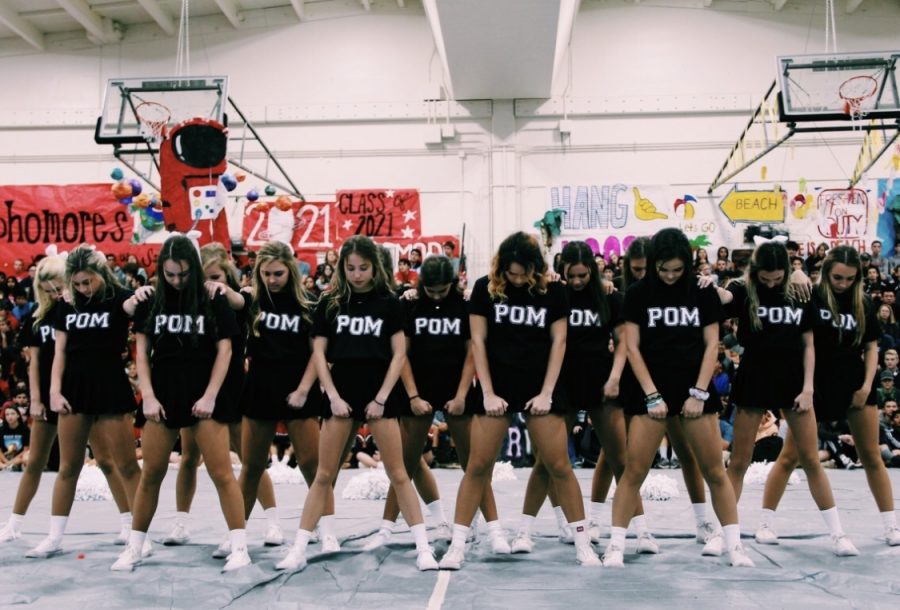 Pom is the dance group at Monte Vista that performs at football and basketball games. Pom showed off their elaborate dance moves and music remixes at the 2018 homecoming rally.

Like every cliché high school movie ever made, cheerleaders accompany football games. In addition to cheer, another group joins athletic games.
Pom is the dance and cheer hybrid pep squad at Monte Vista. They perform at school rallys, and football and basketball games.
Monte Vista’s pom coach of two years, Alicia Frumenti, described Pom as a combination of cheerleading and dancing.
“Pom girls are basically cheerleaders mixed with dancers,” Frumenti said. “Pom does similar things, but it’s more dance-based.”
The pom dance squad creates its own elaborate routines and the music remixes that accompany their half-time performances.
One major difference between Monte Vista’s Cheer and Pom teams is the kind of activities the teams engage in during their performances.
“In cheer, you watch girls get thrown in the air,” Frumenti said. “Pom doesn’t do that at all. That’s the biggest difference.”
Another distinction between cheer and pom is that only one group performs at Monte Vista’s home and away basketball games.
“There’s a smaller number [of girls] on Pom, and the mats that Cheer needs to perform in the gym take up time [to set up],” Frumenti said. “It’s easier for Pom to be the only one performing.”
In the article “Poms vs. cheer,” published on The Gazette’s website in March 2015, Ceci Pitsticks, a sophomore at Marion High School in Cedar Rapids, explains the differences between Cheer and Pom. Her points coincide with Frumenti’s observations on the variances between Monte Vista’s Pom and Cheer.
“There is a very large difference of what the Poms teams do versus the cheerleaders,” Pitsticks wrote. “The Poms team is dancing. They work on choreography for weeks… They will be the ones doing turns and leaps…The Poms team is there for the crowd’s entertainment, not to get them pumped for the offense or defense.”
The idea of pep squads and drill teams — predecessors of the Pom dance squad — were created by colleges and high schools in the 1930s to help boost school spirit, despite the all-encompassing shadow of the Great Depression.
According to Epic Sports.com, a retailer in sports equipment, the establishment of pep and drill squads were catalysed by two women from Texas, “Gussie Nell Davis of the Texas Woman’s College in Denton… [and] an energetic young high school woman named Kay Teer, a cheerleader at Edinburg High School, in the Rio Grande.”
The teams created by Davis and Teer took inspiration from cheer routines and military band uniforms to create the dance squads we recognize today. The popularity of dance squads increased until the trend spread throughout the entire country.
“Other parts of the country caught on, and in the late 1940s drill teams had begun to spread throughout the south, the Midwest, and into California. It was thought to be a great way to rebuild morale after the Second World War. Pep and drill teams were now on the map for spunky young school-aged women with a flare for dance.”
Monte Vista’s Pom dance squad has been a memorable part of football and basketball season for multiple decades.
“Pom has traditions from the 80s,” Frumenti said. “I don’t know when it started, but 50 years ago, I think [Pom] was called the Pom Pom Girls.”
Fringe adorned outfits are one of the traditions Pom still continues today.
“We wear the uniforms with fringe for the Pom team picture and at one game a year,” sophomore Amanda Capovilla said.
Despite it being her first year on the squad of 14 girls, Capovilla believes the best part of being on the team is how supportive and close the girls are.
“The best part is the bond [I have] with the girls,” Capovilla said. “Before rallys, we go to one of the girl’s houses and bond. Sleepovers are [also] a big tradition we have.”
According to Frumenti, the best part of being the Pom coach is seeing how much the girls care about each other and seeing them working together.
“It’s fun to see the girls collaborating and being creative with something they love,” Frumenti said. “It’s also great to see them respecting each other and growing as individuals.”