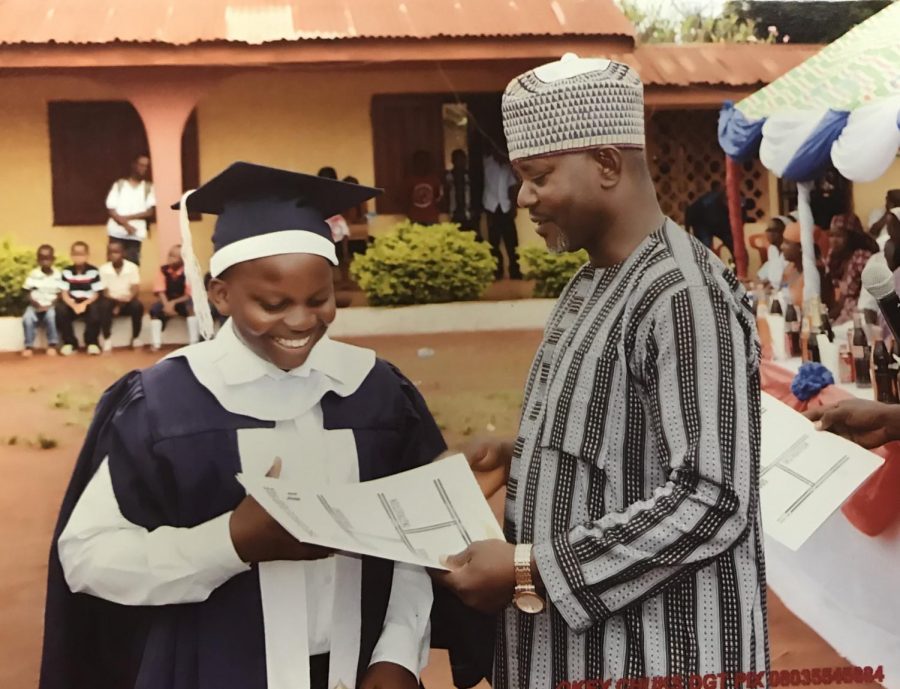 Kenneth with a former teacher in Nigeria.

Exploring a new school in a different country offers new perspectives of education disparities around the world. A Nigerian exchange student joined Monte Vista this year in hopes to help the education system in his home country.
Junior Obinna Kenneth was born in Benue State into the Igbo tribe. At the start of seventh grade, he moved 310 miles away to Kaduna State where he attended boarding school.
“I wanted to go to a better school [because] private schools have better funding,” Kenneth said. “Public schools are funded by the government, but they are corrupt and teachers don’t care. They believe A belongs to God, B belongs to the lecturers, and the highest we can get is a C.”
Though private schools are expensive for most of the Nigerian population, Kenneth earned a scholarship in seventh grade due to his high-achieving academic performance. The scholarship will cover the rest of secondary school, which goes up to 12th grade.
“Fortunately for me, I got a scholarship to a very good school in Kaduna, number one or two in the entire state,” he said. “[My mom and I] were both very pleased that I could get more exposure in a better school even if that meant moving out.”
In fact, his move to Kaduna would not be comparable to his next destination over 7,775 miles away: Danville, California. Kenneth applied to the Kennedy-Lugar Youth Exchange and Study Program, and out of 700 students, he was selected with 19 others to study in the United States.
“My principal told me about this program,” Kenneth said. “I was trying to stay humble in the process [even when] people were making fun of me because they thought it was compulsive to come to America, but I thought there was no harm in trying.”
Despite only seeing his family during Christmas over the last four years, the opportunity to study at Monte Vista excites his family, for he can contribute to Nigeria’s improvements through his experiences.
“The only difference [between each student] is the opportunities and chances each one of us gets,” Kenneth said. “It’s my role to be an activist and push technology to places it hasn’t reached. I want to transform my knowledge to them and show them that if I can do it, they can do it better than me.”
Unlike in the United States, the Nigerian government does not encourage its youth to attend school; instead, it hinders students’ educational opportunities.
“Here in the U.S., if you don’t come to school for one day, you’re persuaded to come to school,” Kenneth said. “Back in Nigeria, kids are the ones forcing and pushing themselves to go to school. The school, however, is pushing them back home for not being able to afford tuition.”
As a result of the lack of education, Kenneth describes the erupt of violence that prevents society to progress.
“In the essence that the youth of Nigeria is idle, that is when their temptation comes in: the result of violence and terrorism,” he said. “If you and I were not in schools, we would have zero moral and intellectual knowledge. Most of the kids in Nigeria don’t have our perspective because the Nigerian government has not given them the opportunity to be in school. The only way the youth reacts to all of this is by violent means because they don’t know a better way to react.”
As a whole, it seems that the Nigerian government resides above its citizens in all aspects of society, from education to religion to economy. According to Kenneth, it leads the citizens to live a flawed life.
“It’s not that Nigeria has bad people, but it’s that there is greed and corruption in every corner,” Kenneth said. “The people have been trained to believe that these politicians are saviors – that these politicians are gods. They think this is the normal way of life, which is sad!”
Having spent four months at Monte Vista, Kenneth has been exposed to higher-level courses that allow him to explore his interests to benefit his home country.
“I’ve gained a lot more knowledge here [through AP Computer Science and Engineering classes],” he said. “I was happy because it meant freedom and access to learn what I wanted to learn. Knowledge was at my fingertips.”
He has created personal goals as the first steps to improving life in Nigeria.
“For now, I want to start an engineering club,” Kenneth said. “If I amass enough wealth, I want to push education for one million kids in Nigeria, set up an engineering facility across Africa to solve environmental problems and solve the political issues. I really believe we can create more democracy than anarchy to encourage more love.”
Kenneth’s visa has a two-year limitation in the United States before he has to return to Nigeria and stay for two years without leaving the country. His future is uncertain, but his message to affluent and developing communities remains unchanging.
“No one gets a choice to be born where they are born,” Kenneth said. “You just open your eyes one morning and see that you’ve appeared in the world. Just acknowledge the fact that it is a privilege and respect everyone for their backgrounds. If you have any way to affect someone’s life positively, always strive to do that. Never look down on people and see how unique each person is because that’s what makes people, people. Find your own specialty because you can be whatever you want to be.”