To Spot a Predator 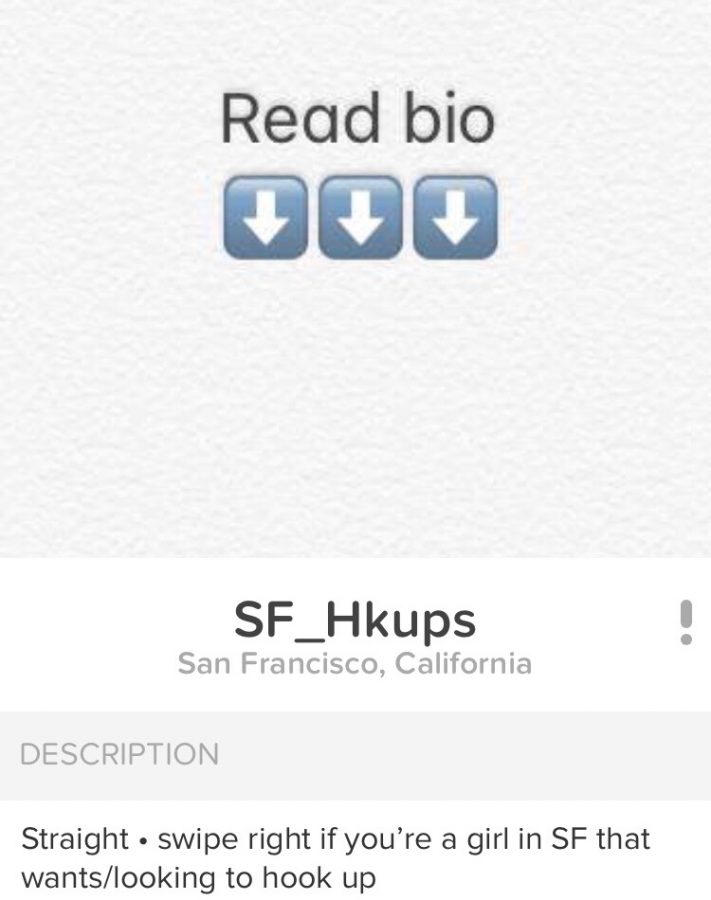 Many profiles similar to this one are present all over the app. The profiles on the app were anonymous. If messaged, users would not have any clue of who they had talked to.

High school is tough. Especially when it comes to relationships. Self-consciousness, feelings of inferiority, and stress often plague these normal day to day relations. Many teenagers looking for platonic or romantic relationships are now using the app, Spotafriend, to find their “soulmate.”

Spotafriend, founded March 1, 2015, is an app targeted towards teens as a social media site to make new friends. However, many minors are the using the app as a Tinder alternative. According to the terms and services, teens must be between the ages of 13 and 19 to use the app.

At first the idea may seem mundane. Times have changed— many teens have online friends today— so why shouldn’t teens be able to have access to a local friend making site that is similar to their social media? Spotafriend states on its homepage that it is a “new way to make friends.”

However, as innocent as it may seem, the app has an adverse effect on its target consumers because of its saturation of malicious content.

The homepage makes it clear that the site is not and does not promote “teen dating;” however, the site has a similar format and faces similar problems that other dating sites have. People can fake their identity, post explicit images, and explicit language can be exchanged between users.

“I get some really inappropriate guys,” A user on the app, “qxeenmimi_” said. “I just want some people to have fun [conversations] with and FaceTime with.”

“David.L”, another user on the app, said, “I’ve encountered a whole bunch of people just trying to hook up.”

In the Spotafriend terms of use, it states that users are not allowed to post anything that “provides material that exploits people under the age of 18 in a sexual or violent manner, or solicits personal information from anyone under 18.”

It’s also stated in the terms of service that  “making sexual propositions or sexual innuendos to anyone under the age of 18 years old is against our terms of service and illegal in many places. This kind of activity will get your account deleted and reported to your local police,” showing that the app does not condone and will report predators.

What makes these misdeeds nefarious is that the fact that this app is meant for minors; no one over the age of 19 is permitted on the site. This, however, might not stop sex offenders or child predators.

You can claim to be anyone, as the only security initiative is to post a picture of yourself with one finger up upon account creation— which can be circumvented by searching around on google images.

Even the app Tinder, that has adult users, faces many horrific incidents. Assaults, rapes and burglaries have been planned and committed with the help of the app. Some authorities are warning parents to monitor their kids social media usage because of apps like Spotafriend.

Although many adults have issued warnings about Spotafriend and similar apps, teenagers still use it and enjoy it, even if they encounter some unwanted advances.

“I think it is an okay app at most times,” user @jasmine? said. “I feel that some people, more guys than girls, are only looking for sexual actions.”

So why do teenagers still use the app? It’s simple, although the cons outweigh the pros in this situation, it’s still an app for teenagers to talk to other teenagers— which many teens enjoy.

“I believe this app does its job,” user @_quackster_ said, “ it provides people new opportunities to meet new people.”

Many teens fail to recognize how easy it is to fake an identity online, or acknowledge the gravity of sending explicit images to each other. If someone were an adult on the app, there would be no way to know who they are unless you have already met them.

@Qxeenmimi_ said, “Some guy said he was 13 and when he was really 21, it totally freaked me out.”

It is not normal nor is it acceptable for this to be happening. Although it has continued for so long that teenagers accept catfishers as the “norm,” in reality it shouldn’t be. This site wants teenagers to make friends in each other during an awkward phase in their life. So why should people over the age of 19 even think it would be a good idea to try and exploit girls and boy on an app that specifically says no one over the age of 20 is allowed?