How far have we come in a century? 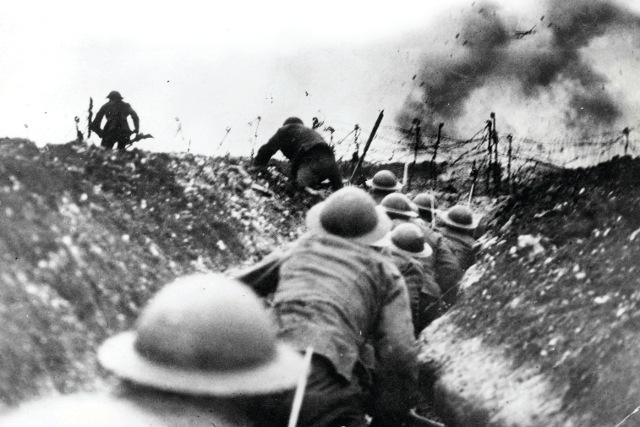 Soldiers climbing out of the trenches heading out to face the enemy. WWI was one of the bloodiest wars ever fought in human history.

100 years ago this month, one of the bloodiest wars in human history ended, yet its effects have left an everlasting scar in today’s world.
World War One, also known as “The Great War,” officially began on July 28, 1914. It ended on Nov. 11, 1918, in an armistice between the 32 countries that partook in it. Over 10 million people died as a result of the four-year war. The Treaty of Versailles officially ended the war on June 28, 1918, between the Allied powers, which mostly consisted of the United States, Britain, France, and Russia, and the Triple Alliance, which consisted of Germany, Austria-Hungary, Bulgaria, and the Ottoman Empire. Europe was left in shambles, and the world had entered a new age.
WWI is often left in the shadow of the second World War due to the mass scale and popularity of WWII, but its effects on the world are second to none. The failure of the peace treaties of WWI directly lead to the rise of fascism in Europe, and more specifically Nazi Germany and its war machine. In the Treaty of Versailles, Germany was instructed to take full blame for the war and suffer the consequences. The German economy was overstressed due to the $6.6 billion of reparations and inflation that ensued. With the Great Depression in the United States, Germany fell even farther into economic uncertainty. Germans, desperate, turned to fascism and gained a great sense of nationalism, resulting in the National Socialist German Workers Party’s rise to power.
Russia declared war on Germany in August of 1914, establishing the eastern front. Russian peasants and the working class lined up to enlist in its army to fight alongside the Allied powers, but by 1918, the Russian public was determined to withdraw. With rising economic pressures and numerous failures in the war, the Russian people revolted against the pro-war Tsar Nicholas II in 1917 in the Bolshevik Revolution. The Bolsheviks, Russian communists, took power and signed a peace treaty with Germany, taking Russia out of the war. A four-year civil war ensued which resulted in the Union of Soviet Socialist Republics (USSR).
The Soviet Union would effectively become a world power by WWII and posed as a great threat to western democracy. At the end of the second World War, the United States and the Soviet Union embarked on a 45-year cold war, sparked from the bombings of Nagasaki and Hiroshima. It ended with the fall of the USSR on Christmas day in 1991.
The cold war resulted in devastating proxy wars including Vietnam, Korea, and Afghanistan, a massive nuclear arms and weapons build-up, and destruction between Europe and the rest of the world. Its effects can still be seen today as both countries continue to play a major role in world politics and as eastern Europe recovers from the age of the “Iron Curtain.”
The United States did not enter WWI until April of 1917, believing that the war was “Europe’s problem, and not ours.” But constant threats from the triple alliance, and most specifically Germany, changed that. The two most notorious causes for the U.S. to enter the Great War were the Zimmerman Telegram, which was a telegram from Germany to Mexico telling them if they joined the triple alliance that they (Germany) would help them (Mexico) take back former territories in the United States, and the sinking of the Lusitania, which was a British ship, carrying 128 Americans, that was sunk by a German submarine. The U.S. shifted the tide of the war in favor of the Allied powers to prompt its victory.
As the economies in Europe were left in large sums of debt, they turned to the United States. The “Roaring 20s” saw a massive production increase and more jobs became available, expanding the U.S. economy. American companies were able to expand their business and sell to more countries than before. By the early-20s, the United States had cemented itself as the world’s economic superpower, something that has not changed since. However, the “Roaring 20s” would be short-lived as the Great Depression proceeded in the 1930s.
The impacts of World War I on today’s world is great. Unfortunately, the biggest impact of WWI comes in its name. There is a reason that it is called “World War One” and not just the Great War. Millions would again go to battle just 25 years later in the worst war the world has ever seen, WWII. Nonetheless, the end of WWI established a day where all Americans can honor those who fought for our country.
An armistice was signed on Nov. 11, 1918, on the eleventh hour and eleventh minute between Germany and Allied powers to stop the fight of WWI. One year later, in 1919, President Woodrow Wilson called for a moment of silence across the country to remember those who fought in the war. Armistice Day was not officially pronounced a national holiday until 1938 after Congress approved of it and it was not until 1954 when Armistice Day would be changed to ‘Veterans Day’. President Dwight D. Eisenhower changed the name so all American veterans, not just WWI veterans, could be honored. During the 1970s, Congress changed Veterans Day to the third Monday of November, but most Americans did not like the idea due to the historical significance of Nov. 11. President Gerald Ford passed an order in 1975 placing Veterans Day back on Nov. 11.
This November 11 is the 100th anniversary of the armistice and the end to WWI, as well as the 99th Veterans Day. Unfortunately, the men who fought for the Armistice have all passed on, as the last WWI veteran died in 2012. This Veterans Day, nonetheless, is still very important as it is a day to remember the century mark since WWI that our country and the world has experienced. This Veteran’s Day thousands of parades will go up and down small-town streets and major city streets, and ol’ glory will fly high and proud as we honor our nation’s veterans.