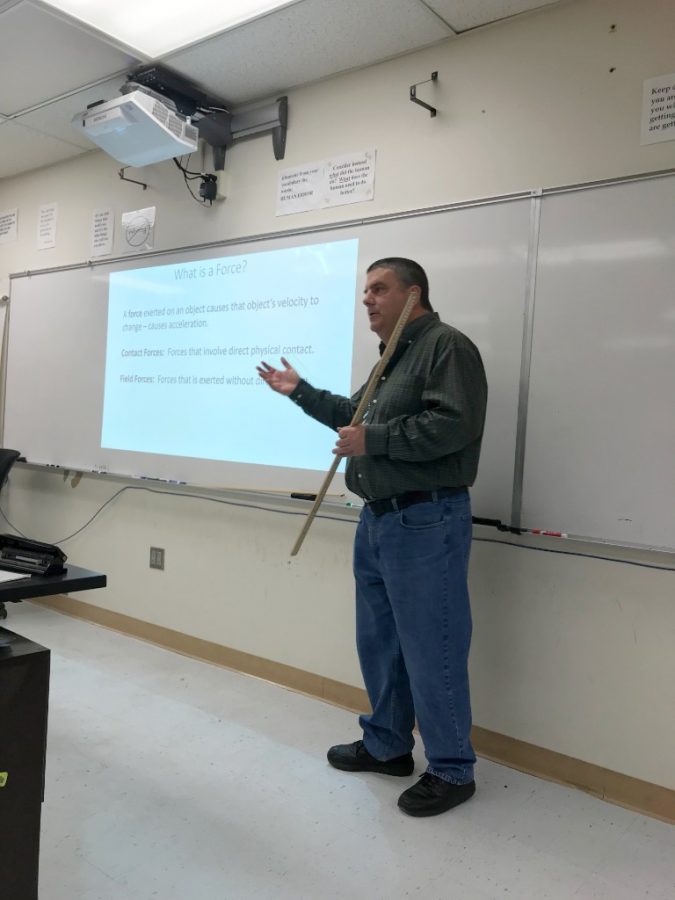 David Rakestraw is a new member of the MV science department. Along with teaching physics, he is also a Program Manager at Lawrence Livermore National Laboratory (LLNL). His duties as Program Manager and what he does at LLNL compile a strong resume.

A part of Rakestraw’s job at LLNL is to find and execute preventions for biological, radiological, nuclear, chemical, and explosive threats. He has worked on programs that help agencies like the Department of Defense and Homeland Security protect people all over the world.

“Every year the Coblentz Society finds somebody in the world who they think is the best scientist in [spectroscopy in] the world at that time and give that award to them,” Rakestraw said.

While growing up in Ohio, Rakestraw did not appreciate high school, but he found his passion in college with researching science.

He originally went to Bucknell University — he ended up transferring to Ohio Northern University (ONU) for his sophomore year.

“My girlfriend at the time, who is now my wife of 35 years, wasn’t able to go there but she had a scholarship to Ohio Northern University,” Rakestraw said. “We both decided to go to [ONU]. ”

Rakestraw decided to become a teacher because of his three children. He believes what you do in high school is important later in life and wanted to help kids make decisions for their future.

“I have three kids; two of which are now in college [and] the third is a junior in high school,” Rakestraw said. “High school is this really important time…where [people] really decide on careers and their [futures].”

Because of his success at ONU and being accepted into every graduate school he applied to, Rakestraw tries to explain to his students and kids that getting into an Ivy League for undergrad is not necessary to be successful in life.

“When I finished Ohio Northern, which none of your readers will have ever heard of, I was able to get accepted into graduate school at Stanford, Berkeley, Caltech, MIT, and Rice — every school I applied to,” Rakestraw said. “I try to tell people here to not get stuck on the feeling that you need to go to one of the [top] 25 schools on some list somewhere…because there’s a tremendous amount of other schools that can really help you grow in life.”

Junior Kaley McCumiskey enjoys Rakestraw’s class and believes he is an amiable and helpful teacher.

“[Rakestraw] is very approachable,” McCumiskey said. “He always asks if we understand and checks that we’re all on the same page. He would help you with anything.”

Senior Tyler Soria, another one of Rakestraw’s students, sees Rakestraw as a teacher who uses real-life examples and is involved around campus.

“[Rakestraw] likes to use examples from the real world that relate to something that’s currently happening,” Soria said. “He’s a really nice guy and relates to students a lot, since his son went to Granada. I saw him at a football game and he’s very involved.”

Rakestraw’s goal as a teacher at MV can be encompassed into two main points. He wants people to understand science and hopefully, have people enjoy it as much as he does.

“I’m trying to accomplish two things,” Rakestraw said. “One is to really get people excited and thinking about science, so they at least can consider it for…a career standpoint. Even if they don’t [go into science]; that they understand science enough [to get by] because the world is a very technology focused place and is going to continue to be; regardless of what they end up doing. It’s important that they know about science and technology.”