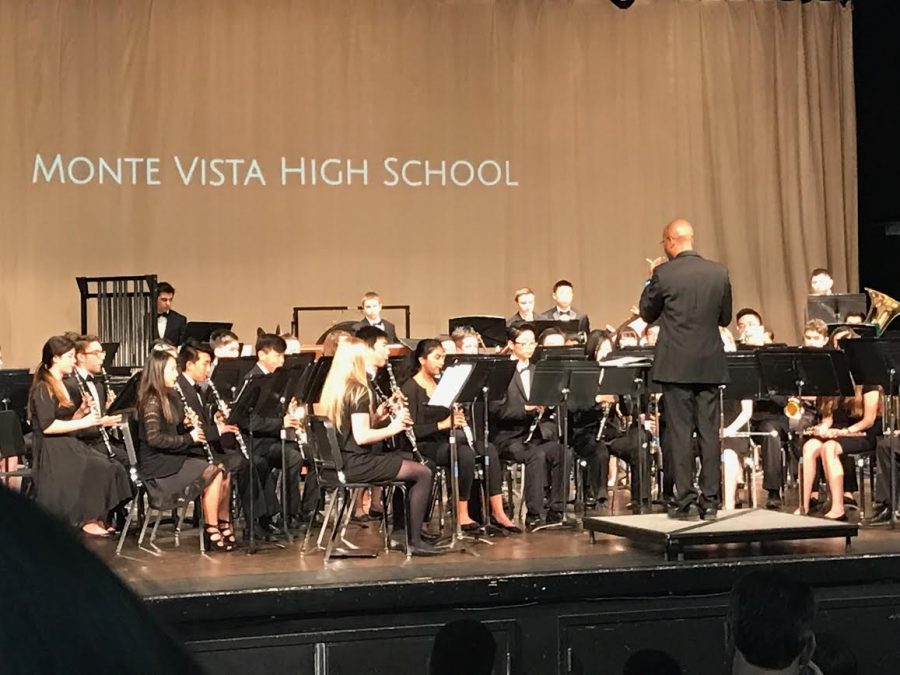 The festival was not set in stone until the students practice for weeks. Monte Vista students spent most of second semester preparing for this event.

“We received our music for the festival at varied times, the earliest being the beginning of second semester,” freshman and trumpet player Cody Peterson said. “The preparation mostly started at this time; however, everything really came together within the last two weeks before the performance.”

Instrumental teacher Ed Cloyd conducted wind ensemble and the drumline as they practice. He gave feedback to players individually and as a group.

“Mr. Cloyd has spent a ton of time and devotion to helping us out for the festival,” senior and bass clarinet player Christopher Lawson said. “He holds sectionals to allow people of the same instrument to understand their parts better, to assign playing tests to help individuals improve on their musicality, and to conduct the whole ensemble.”

About two weeks before the actual performance, Monte Vista’s bands held their personal clinic with a clinician in order to run through the process. It doesn’t always result in perfection because, after all, it’s a practice performance; however, there were challenges that brought attention to the bands.

“The clinician had positive feedback, complementing many aspects of each performance,” Peterson said. “Most of his concerns were relatively minor and generally consisted of rhythmic and articulatory fixes. As a group, a little more practice always helps and could easily help each band perfect their select pieces.”

After weeks of practice, the bands finally had the opportunity to perform. This year, Monte Vista seemed to simply enjoy themselves on stage which led to a solid performance.

“[All the] bands had solid performances, and should be happy with how they played, regardless of the results,” Peterson said.

Through past performances, the bands have made improvements for the event to run smoothly. Though as always, there were changes that would perfect it.

“The festival went well. In the time between the [previous] competition and the Area Band Festival, we tweaked a few parts that needed fixing, so I’d say we improved from our last performance,” Mobley said. “[However,] there is always room for improvement. I think we could have had a better balance as a band in some parts, bringing out parts that may not have been heard as easily over louder parts.”

Every member in the Area Band Festival concurrently played on stage as they concluded with the national anthem.

“The best part of the festival is collaborating with all the elementary and middle school bands to play the ‘Star Spangled Banner’ at the end of the festival,” Lawson said.

Because most of Monte Vista Wind Ensemble and Drumline students had previously participated in the Area Band Festival as elementary, middle, and now high schoolers, they understand how the roles change between grades and how different it can be. In elementary school, it is more about familiarizing a beginning musician to the world of music and envisioning what they can become.

“For elementary school, the whole experience is very exciting because you get to see where you’re headed within a few years,” Lawson said. “Kids get really excited to hear how higher level bands perform and sound. Also, many elementary schools don’t have access to [as many] instruments, so it’s very exciting for the kids to see and hear these instruments for the first time.”

By middle school, students become more advanced and develop a set of skills from elementary school but are also heading toward the high school level. Students are able to make new decisions and have new challenges set for themselves.

“In middle school, the pieces start to become more intricate, and everyone has more experience behind them,” junior and clarinet player Amanda Mobley said. “Additionally, there are many more instruments than in elementary school, so some players decide to switch to a new instrument.”

Everyone seems to have a different experience with the festival by the time high school rolls around. Peterson and other players feel that there is more pressure to focus on the finer details.

“As a high school band, the standards are set somewhat higher than those of a middle school; therefore, it takes more concentration and individual effort than prior years in band to achieve the result we want,” Peterson said. “Additionally, the judging for a high school band is usually stricter than for a middle school band, meaning we have to make sure to go the extra mile for the result we want.”

Reflecting on the festival as a whole, there are also some students, like Lawson, who believe that the festival unites all the band students together, and it’s a whirlwind to see how far they’ve come, regardless of the tedium.

“For us high schoolers, the experience is very different. Since most of us have done this festival for so many years, it becomes a bit repetitive,” Lawson said. “It’s still very fun for the high schoolers because we were once in the shoes [of an elementary and middle schooler], so we can reflect on the long journey we’ve made in band.”

Beyond the performing aspect of the Area Band Festival, playing in a band with other schools allows the students to share a passion.

“The best part of being in this festival was not only having the opportunity to perform, but also getting to see what other bands around the area had to offer,” Peterson said. “Being able to travel and perform is always amazing, and it greatly benefits the bands as a whole.”

Since fourth grade, Lawson has resonated with music to explore a connection with others.

“It’s really fascinating to hear all these different levels of musicianship come together to play a single piece. [As a fourth grader,] I remember I was always excited to play a song with the ‘big kids,’” Lawson said. “I love Wind Ensemble because music is a language that everyone in that class understands. We all share a common attachment to practicing advanced music with one another. It’s great to take a break from math and English classes, and just play soothing music.”

Mobley played on the school band as an elementary schooler, middle schooler, and now as a high schooler in the Wind Ensemble, playing the clarinet. Her journey and progress is a mind-boggling experience for her.

“The best part about this festival is being able to see how far we’ve come as musicians. I remember being an elementary schooler at the Area Band Festival thinking how amazing the high schoolers sounded,” she said. “Now actually being part of Wind Ensemble and knowing that younger students are looking up to us like I used to is really humbling. My favorite part about Wind Ensemble is being able to play everyday with others who share the love for music. Everyone has gotten so close, we really feel like a family!”