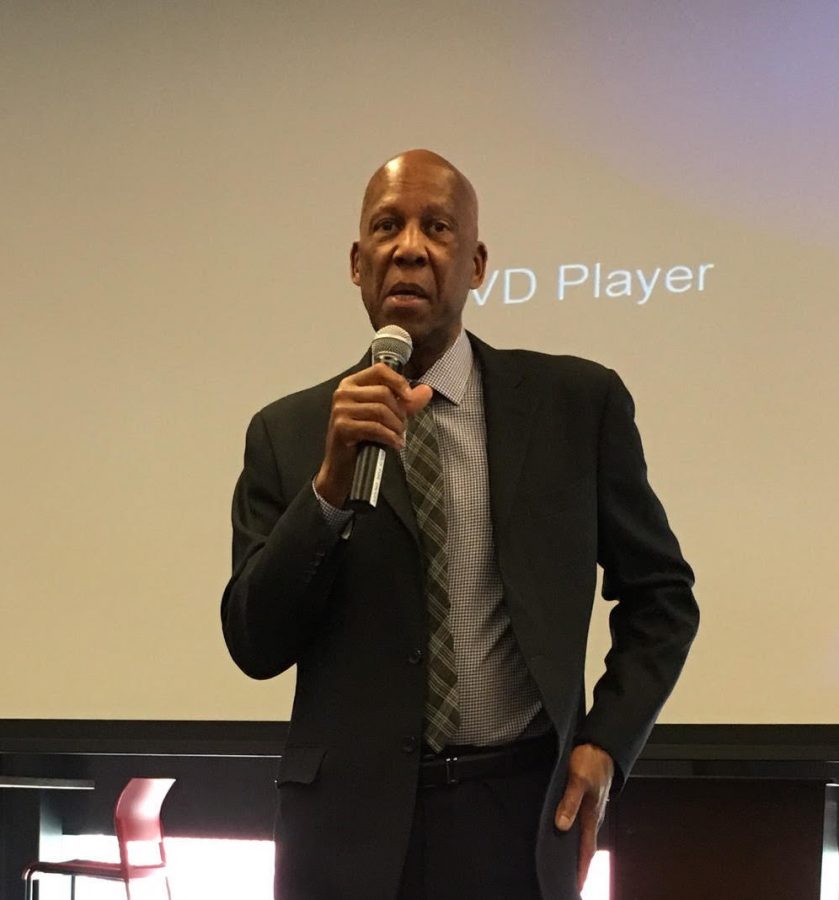 Terrence Roberts speaks to students from around the district. He was a member of the Little Rock Nine who were the first African Americans to go to an all white high school in Arkansas.

Terrence Roberts, a member of the Little Rock Nine spoke to students around the district at Monte Vista on March 2.

The Little Rock Nine were nine students who were the first African Americans to attend an all white high school in Little Rock, Arkansas in 1957. They attended Little Rock Central High School, where they were initially prevented from physically entering the school by the governor at the time, Orval Faubus. The Little Rock Nine endured many struggles attempting to integrate schools in the south, but their hardships changed the course of segregation in America forever.

Monte Vista invited Terrence Roberts, one of the former students who volunteered to integrate, to speak to students throughout the district. Roberts is currently a school teacher but he also speaks very often around the country at places like the Museum of Tolerance. About twenty students from each school in the district gathered in the library to hear him speak.

“My life was at risk all the time,” he said. “I was never sure on any given day that I would return home alive.”

The Little Rock Nine had to forcibly integrate under President Eisenhower’s executive order after Governor Faubus sent the Arkansas National Guard to prevent them from entering the school. However, Eisenhower federalized the National Guard and ordered them to protect the students instead.

“I would have been killed without the soldiers,” Roberts said.

Roberts did not spend the entire three hours talking about his life story, however. He had a more powerful message as he answered students’ questions and discussed the history of racism in America and the effect it has still today.

He stated that America has not made enough progress to really call it progress and that people of an entire society cannot simply undo and forget 335 years of racial discrimination.

“Racism is alive and well because it started in 1619 and has never been confronted,” he said. “We have to wake up a large segment of people.”

Some of students could relate to this, especially the students of color like senior Katarina Stroud, president of the Black Student Union.

“I really enjoyed Terrence Robert’s presentation because he didn’t sugar coat any part of his message,” Stroud said. “He shared the reality of race relations in our society as well as his past experiences.”

Roberts had a more inspiring message for students as he talked about how despite the immense amount of brutality and animosity he faced at such a young and vulnerable age, he was able to grow up into an educated adult without giving up.

To him, self-love was how he got through every day at Central High. Self-love was his key to facing all the death threats, physical assaults, and verbal abuse he constantly received during a vulnerable time in his life.

“I learned that these kids were doing things to make me feel afraid,” he said. “But I’m Terrence Roberts. I know who I am, and I’m comfortable with who I am.”

This inspired the students in the audience.

“My main take away was that when faced with hatred, it is important to unconditionally love yourself,” Stroud said.

Roberts also knew that he was given a once in a lifetime opportunity, and though he wanted to quit at times, he never regretted volunteering to be part of the integration.

“I knew that millions of people had given their lives centuries ago for me to have this opportunity,” he said. “I would be spitting on their graves if I turned back.”

On the same topic of self-love, he told the audience that it is human nature to exclude, but that has no way of defining who you are.

“Not everyone’s going to accept you,” he said “We have a thin layer of civility where we pretend to like each other.”

Despite this, he said that it is important to know yourself and who you are in the universe.

“You are the you who you want to be and you have the right to be here,” he said.

Roberts also stressed the importance of choice and the effects people make based their decisions. He emphasized that every choice people make matters. Who they are, what they do, how they interact with other people, that is all determined by their own decisions.

“Everything we do is by choice,” he said. “I chose not to be bitter, or angry, or hateful.”

He said that it is their choice to confront issues of injustice. He discussed how there will always be differences in opinions no matter where you go and who you’re around. But that does not mean there always has to be a fight.

The superintendent, Rick Schmitt, attended his presentation as well. Schmitt has heard Roberts speak on multiple occasions before.

“I always take away the same message. That you are none of the things people say about you unless you let it affect you,” he said.

“In the end, there are only two things for certain. Your birth and your death. What happens in the dash in between is up to you to make meaningful.”