Mustangs march for equality and rights 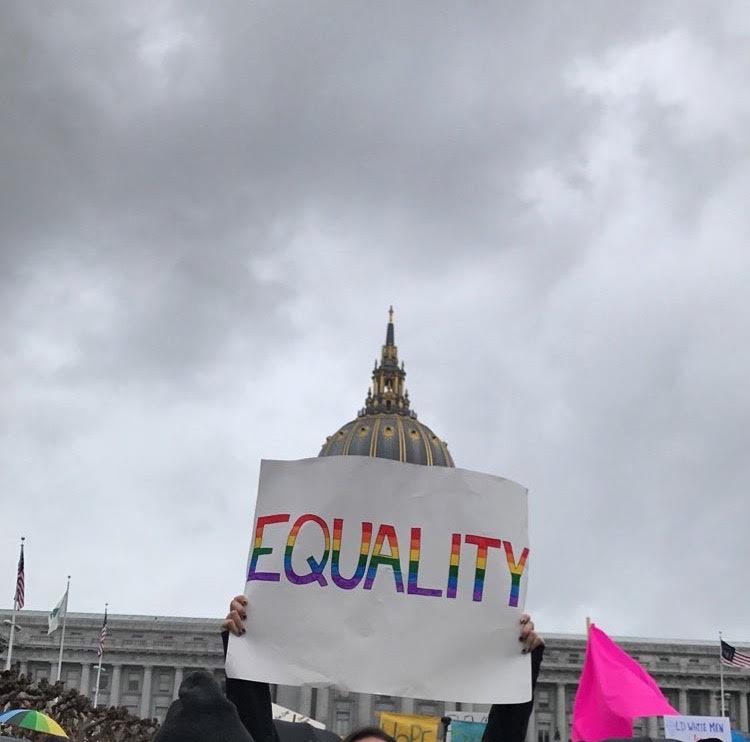 One poster read, “Fight like a girl” another read, “Our Body our Rights”.

These were only a couple posters amongst hundreds of thousands, where participants, including numerous Monte Vista students and faculty members, rallied together for the Women’s March in the Bay Area.

A few Monte Vista clubs attended the event to show their support for the cause, like the Gay Straight Alliance, Black Student Union, and the Intersectional Feminism Club.

“It was an incredible experience to be in an environment where we felt empowered and free to share both our frustrations and our hopes for the future,” Senior Madison Miszewski, President of the Gay Straight Alliance Club, said. “We learned how to resist, what our resistance will look like, and above all, how we must persist to resist.”

The Black Student Union club attended the event as well, with a great passion to defend diversity and human rights.

“I personally was disheartened by the hateful rhetoric in President Trump’s campaign which attempted to marginalize minorities, women, and Muslims,” Senior Katarina Stroud, President of the Black Student Union Club, said. “I wanted to stand in solidarity with those who defend diversity and human rights.”

Similarly to Stroud, many students who attended believed the event was a transformative experience.

“This experience was life-changing,” Stroud said. “It was surreal how unified I felt with the thousands of other SF marchers. The march was comprised of people of all walks of life, yet those differences didn’t divide us – they strengthened the peaceful message the march aimed to send to America.”

Colorful Banners, creative homemade posters, and powerful art pieces were brought to raise up during the march.

The Intersectional Feminism Club was amongst these crafty supporters – bringing posters with written quotes like, “Love Conquers All” and drawings, like the popular symbol of a fist going through the female gender sign symbolizing the fight for women’s rights.

“A few of the club members and I got together outside of school to make posters,” Junior Julia Lyckberg, President of the Intersectional Feminism Club, said. “…We wanted our posters to reflect our key values of spreading love, and not using negativity to get our point across. Our main goal has always been to unify, not engage in hate against anyone.”

Others wore bright, pink attire to show their support for the cause. A popular accessory worn amongst these participants were “p—- hats”, pink knitted beanies with cat ears, which were created as a visual statement to show one’s support for women’s rights.

“My wife’s great at crocheting, and once she heard about the event, she made our whole family those p—- hats,” English teacher Stephen Brooks said, “It was a great experience, a whole bunch of people of different interests were coming together, not only for just women’s rights, but for a variety of issues, which was powerful to see.”

Another teacher who attended the march is Art teacher Jennie Drummond, who marched for her future niece who is anticipated to be born this coming June.
“I marched because I want my future niece-who’ll be a biracial girl coming into this society- to have the best the world has to offer her,” Drummond said, “and I will continue to fight to make sure she does.”

English teacher Kimberley Gilles was also a participant in the march, at the Oakland location, and marched for women and education rights.

“I participated in Oakland, and it was just a very joyous and peaceful experience,” Gilles said. “There were no arrests and no property damages in all of Oakland by the participants.”

At the end, many participants left the march with newfound knowledge and inspiration from the experience, like junior Lena McGee.

“It was an eye-opening experience,” McGee said, “people joke around about feminism, saying it’s not going to make a difference, but seeing the thousands of people marching together- even through the rain- showed that it really is something to take seriously. It was very inspiring and emotional to see all these people come to further the cause.”