No port, no cord, yes problem! 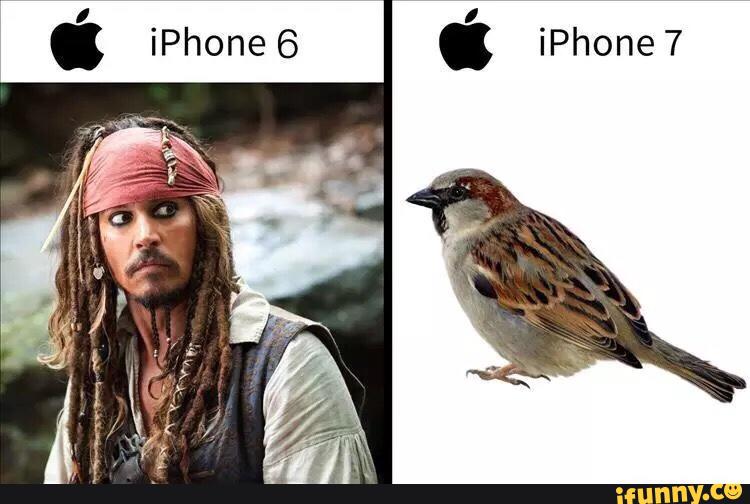 The new iPhone 7 doesn't include a headphone jack unlike the iPhone 6; similarly, to Jack Sparrow when excluding the Jack. (Courtesy of iFunny.com)

The new iPhone 7 was released a few weeks ago, and the complaints are rising.

Many students and adults with iPhones below the iPhone 7 are deciding to stick with their older versions. Why? Specifically, the headphone jack. Instead, Apple put its ‘wireless earbuds’ into store. These earbuds connect to the iPhone using blue-tooth.

Many say that Apple is using this as a user-hostile tactic for pay, however, Phil Schiller of Apple begs to differ.

“The idea that there’s some ulterior motive behind this move, or that it will usher in some new form of content management, it simply isn’t true,” Schiller said. “We are removing the audio jack because we have developed a better way to deliver audio. It has nothing to do with content management or DRM — that’s pure, paranoid conspiracy theory.”

Even so, this doesn’t remove the fact that consumers need to accept buying and paying for extra, easily-lost adapters and dongles just to have a slightly smaller phone and use the headphones they’ve been using regularly for years without issue! What about your bass-boost beats or surround sound buds? It’s not gonna work without a jack for your cord; unless you buy Apple’s special ‘Lightning Port’ adapters for this purpose, as stated before, which connects to none other than the charger port. This angers quite the few, because no wired headphones or earbuds can be used without losing the ability to simultaneously charge your phone.

Dr. Joshua Reiss, the head of audio engineering research at the Queen Mary University of London would have a rebuttal for such an argument.

The tossing of the headphone jack we all know has become a popular topic across the web: memes and articles popping up everywhere, side-by-side with the exploding Galaxy S7, which gives a whole new meaning to ‘the big bang’.

Depending on the public’s final response to this huge change, Apple may or may not be going in the right direction.