Looking back: MV through the ages 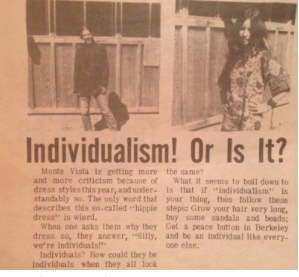 A clip from the September 27, 1968 edition of El Mestengo. This blurb discussed the new hippy dreswear and the writer's point that hippies claims of individualism were not backed up by their actions.

As we are about to end another school year here at Monte Vista let’s look back and reflect, but not on the 2015-2016 year, rather the craziest, funniest, and most major events, quotes, and stories documented by The Stampede since 1968.

One thing to note is that Monte Vista’s newspaper has not always been called the The Stampede. Prior to the 1998-1999 school year the school paper incorporated the area’s Spanish roots by calling itself, El Mestengo.

Monte Vista was established in 1965, but it is unclear exactly when the school paper began. The first issue of the archives dates back to September 27, 1968 so I guess that’s where we will start.

Almost 5 decades ago, when the “hippy” movement was thriving, but some students at Monte Vista weren’t on board. The Editor-in-Chief, Kevin Sausen, wrote a blurb in the September 27, 1968 edition which called this “hippy dress” weird and discounted hippies use of the word “individualism” by saying how, “what it seems it boil down to is that if ‘individualism’ is your thing, then follow these steps: Grow your hair very long, buy some sandals and beads; get a peace button in Berkeley and be an individual like everyone else.”

Blurbs like these help us to further understand the feelings and sentiments of historical movements, events, or milestones from a time in which we weren’t alive to experience.

In the next issue October 25, 1968 a small section was dedicated to commenting on the “Pollution Problem”, but it’s not what you think. This was a blurb commenting on the pollution caused by cigarettes. At the time of this publication there were no restrictions at Monte Vista regarding smoking on campus, including the bathrooms and one student was not very pleased with this situation. They exclaimed that even they have nothing against a person who smokes since, “A lot of people do, but the bathroom is no place to do it. WE ALL know what the purpose of the bathroom is and it isn’t for smoking.”

Even though this practice of smoking in the bathrooms may seem like a time far far away, remember a few years ago when students vaping in the bathrooms was causing the school fire alarms to go off. It seems like history has repeated itself here at Monte Vista.

As the world said goodbye to the sixties, and the hippy movement began to decline, the government also made a shift, to Republican president, Richard Nixon. By February 14, 1972 Nixon was in his final year of his first term and JCT, a staff writer who signed his work with only his initials,  which actually seems very hippy-esque, wrote a piece praising Nixon’s foreign policy. His final sentences addressed Nixon’s then recent decision of making peace offerings to North Vietnam and he said this, “was a great political move.”

Moving away from political and social issues in America, in the December 11, 1981 issue of the paper Anna Neely chose to discuss an issue important to many at Monte Vista, open or closed campus. She brought up the fact that San Ramon Valley High was an open campus, but that it wouldn’t make sense for Monte Vista to be one because it, “is at least five miles from anywhere to eat, or, for that matter, anywhere at all.” Again sound like a familiar topic? Well the debate over Monte Vista’s closed campus is still happening over 30 years later, with many student still envious that our rival, San Ramon gets to have the luxury of an open campus. But like Neely said, “if we really want B.K. food, we can hold out for two hours until school is out.”

Lastly, events documented in the February 8, 1985 and November 18, 1994 edition of the paper point out the curse that was on offices around the school during this nine year period.

On December 16, 1984 the counseling office was destroyed by a mysterious fire during the wee hours of the night. Investigations were launched regarding the cause of the fire. Arson was ruled out, but there were leads to possible suspects,yet no conclusion was made.

Almost ten years later, on October 24 1994, science teacher James Hartman was bitten by a rattlesnake in the science offices. He originally thought its was a harmless gopher snake and picked it up but after it bit him on the thumb he discovered it was a baby rattler. Although he reported that it wasn’t very painful and didn’t feel the need to visit a doctor, later the looks of the bites from the snake’s fangs bothered him and he visited a doctor just to be safe.

After a stalemate of office related events following October 24, 1994 it could have been concluded that this curse was lifted from Monte Vista forever. But wait, didn’t the main office recently flood this year due to an intense rainstorm caused by El Niño? The curse must be back…history is repeating itself once again.