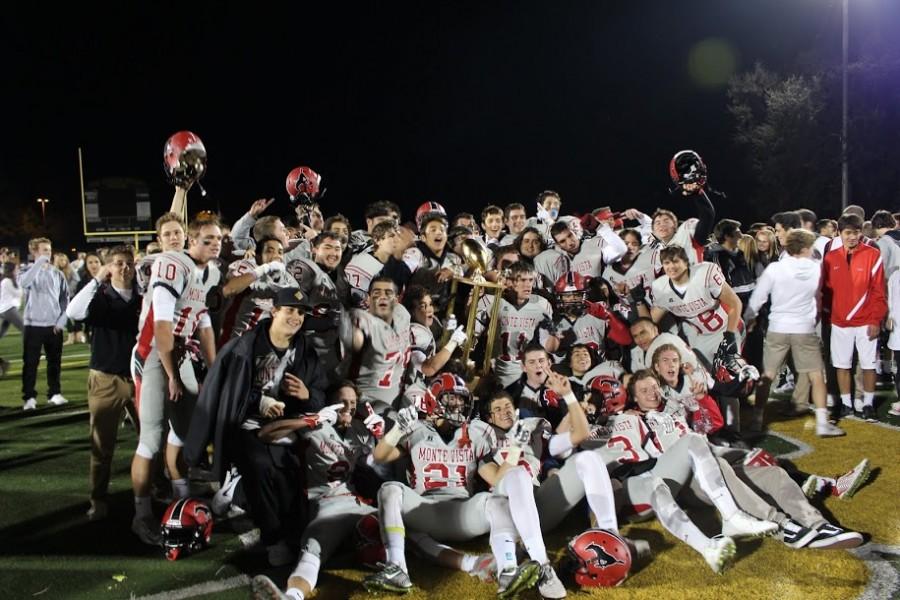 The upcoming football game against Pittsburg has everyone excited, especially after a convincing win against San Ramon.

Although the team strived in the game, their struggles with defense and execution was evident. A lack of focus not only during the game but at practice and before games caused the players to not work to their full potential in the early stages of the game.

In order to defeat Pittsburg, the team will have to be resilient and work together in order to overcome their previous hardships. The team must start stronger and prevent big plays in order to shut down the offense so that their commanding offense can prevail.

Monte Vista’s rivalry with San Ramon is no secret. And before the football teams met on November 6th at San Ramon, the excitement was at at all time high.

“Us a as a team… we look at every game as a challenge. You can’t look past one game. Every game counts,” Coach Bergman said.

Prior to the big game, the Monte Vista team had been doing fairly well with a 6-3 overall record and a 3-2 league record. Although it isn’t a flawless season, the team continues to keep their expectations high.

The team looks promising, with a very strong roster and practice that is keeping the players in shape. Everyday the team will run, lift weights, and run more. The players may not always enjoy it, but it is definitely keeping them in a winning condition. The likelihood of the team doing well in the season is high, and they might even have a chance at winning state.

“[We work] each and every week to improve all aspects of our game,” Bergman said.

The coach said that running and lifting weights is their pre-season workout but they continue to lift weights and run in order to maintain what they have. However, once the season begins they work more on their defense and offense. Bergman also said that the team is working hard to improve on their defensive strategy because that is where they are weakest.

“I’m never happy when we lose. I think that we let a couple of games slip away that we shouldn’t have by underperforming. I think that we made too many mistakes. I think we easily could be 9-0 right now instead of 6-3,” Bergman said.

Although the team has not had a perfect record, Bergman has said that he is happy when his players perform well. Even in their losses he can still be happy if the team played to the best of their ability.

The rivalry between San Ramon and Monte Vista has excited not only the players but the fans as well. Monte Vista always shows up to support their team, and last friday was no exception. The clash always amped up players and some of the varsity cheerleaders had some things to say about the rivalry.

“It’s good for the team. [It] rattles them up,” cheerleaders Jennifer Rowley and Jenna Rae De Maio said.

The players did seem excited last Friday, eager to win to silence the San Ramon crowd and let the Monte Vista twelfth man scream and shout with happiness. However, after being down 20-0 early in the 2nd quarter the Stangs were unusually quiet.

It wasn’t until the team started scoring a few touchdowns that the students began screaming with joy. Although the team was scoring they still had a long way to go before they were in winning condition, but the team didn’t stop trying.

Towards the end of the third quarter the team finally was in the lead 28-20, but they weren’t going to stop there. They kept scoring until the last minutes of the game and ended the game 42-27.

As soon as the clock hit 0 the students stormed the field, eager to congratulate the team and celebrate the win against their greatest rival.

Monte Vista had regained not only the trophy but their pride. Coming from such an early deficit, the team showed how they could persevere and not let the pressure get to their heads. The players stepped up and the domination in the later quarters showed the team’s commanding offense. The players and coaching staff already had a long term goal of winning state and with such a good performance last Friday the goal could become a reality.