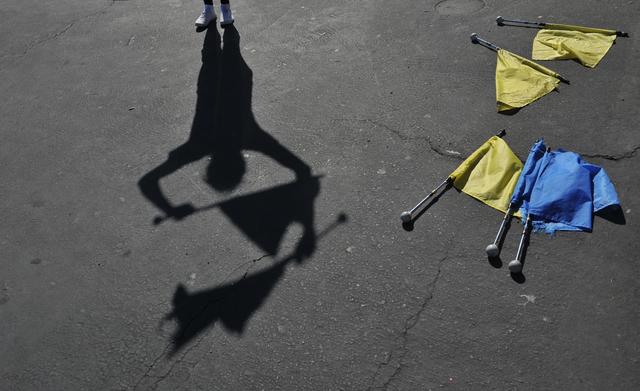 JOSEPH A. GARCIA/THE STAR A member of the Channel Islands High School short flags begins running through workout drills before afternoon practice starts. The squad is preparing for a nationals competition in Anaheim. Since 1985 the school's short flags squad have won 22 national championships. 03/12/2013 OXNARD, CA

Monte Vista’s short flags team has always been dazzling crowds at our school rallies and events, however so far this year they appear to be absent.

The team has had a drastic loss in members this year, due to most of the team graduating or quitting. Short flags is an important part of the school and it’s spirit, so drumming up interest for more people to join is the team’s main priority.

“I talked with my now co-captain, Michael Yatsko, and we decided it would be best to wait until the second semester to start the team again,” Grimm said. “I’m hoping though that some new kids will gain some interest in the activity so we don’t have to cancel the club.”

The short flags tradition is in serious danger of getting canned if it doesn’t get any new recruits this year. The two captains gave many reasons why Monte Vista students should consider signing up for the team.

“It is just a really fun activity, and you get to meet a few other people who are always really nice and fun to be around,” Grimm said.

Yatsko agreed, saying how the people they perform with are always super easy to get along with. The team dynamic is most members’ favorite aspect of the flags family. Besides making friends, he detailed how short flags allows new skills to be developed.

“Hand-eye coordination, good timing, and determination,” Yatsko said on the skills necessary to perform. “I’ve learned to be a better team player and how to work in a group.”

The cherry on the cake is the chance to show off your sweet flag twirling moves in front of the whole school.

“After you perform, especially after a really good performance, it’s the best feeling ever, because you know you look really cool and the rest of the day you just get endless compliments,” Grimm said.

Tryouts for the team will be held during the first week of December. Students of all grade levels are encouraged to attend and see if they are interested. It is incredibly important for everyone to get involved in short flags to keep the club alive.

“But honestly, if you’re considering it, but there’s one small thought holding you back, just give it a shot,” Grimm said. “Worst things worst, you just don’t join at the end of the week.”