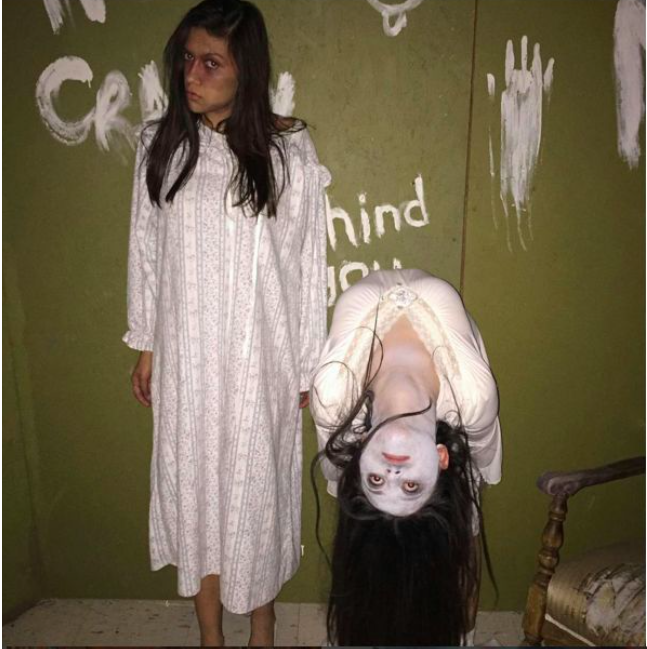 The haunted house, which lasted from Thursday to Friday night, was built by over fifty leadership and drama students from Monte Vista high school.  They put nearly a week’s work into building nearly twenty different themed rooms, ranging from a biology room with a gruesome dissection to an art room painted with deranged clowns.  Over 120 four-by-eight panels were used to transform the drama department into a maze of terror.

“There were so many different twists and turns,” junior Jack O’Neil said.  “I was surprised they were able to build such an elaborate haunted house.”

The students who constructed the house also worked as actors.  As soon the participants bought their tickets, they were guided to the entrance by two creepy ghouls who warned them of the menacing environment they were about to enter.  Throughout the house, student actors, fully dressed with horrifying costumes and makeup, would frighten the participants with unexpected jump scares and spooky dialogue.  Some of the many menacing characters throughout the house included ghouls, clowns, skeletons, teachers, and even a surprisingly terrifying Shrek.

“The actors had to be the scariest part of the haunted house,” junior Logan Anderson said.  “Their costumes and makeup were great and they always stayed in character.”

Although there were many students who helped with the execution of the haunted house, there was one Monte Vista junior who spearheaded the whole operation.  Full time entrepreneur and part time Halloween enthusiast junior Rickey Rickey was the mastermind behind the haunted house.

“I designed the floor plan, obtained the necessary wood to build the rooms, designed the themes and scares in each room, and supervised the overall construction,” Rickey said.

The tradition started four years ago at the Rickey residence, where Rickey built his first walk-through haunted house.  Each year it got bigger and bigger.  Rickey’s biggest haunted house was built in 2013 and consisted of six rooms.

“Over the years, it got bigger and better as I grew more mature and my creative abilities expanded,” he  said.

However, last year, the Rickey’s moved to a new house that could not accommodate a haunted house.  Fortunately, Mr. Connor, Monte Vista drama teacher, offered him the space of the drama department.

“I was hesitant at first considering the short amount of time we had until Halloween, but I figured why not,” he said.  “I really wanted to take my passion to the next level and see if we could really do it.”

In the past, the construction of his haunted houses took over a month.  However, this year, he had only a week.  Fortunately, many Monte Vista students stepped up to assist in the house’s construction.  In such a small amount of time, the students completed a twenty room haunted house, fourteen rooms bigger than Rickey’s biggest year.

“It goes to show that if you have a group of willing and passionate people, anything can be accomplished no matter what time restraints you have,” Rickey said.

Due to the success of the haunted house this year, Monte Vista High School is not only hoping to turn the haunted house into an annual fundraiser, but also a tradition that the students will look forward to each year.  All of the proceeds will go towards the Monte Vista drama and leadership departments as well as a cancer-oriented charity.
“Our goal was to create a ‘we aren’t just your everyday high school haunted house’,” Rickey said.  “I think we achieved that.”