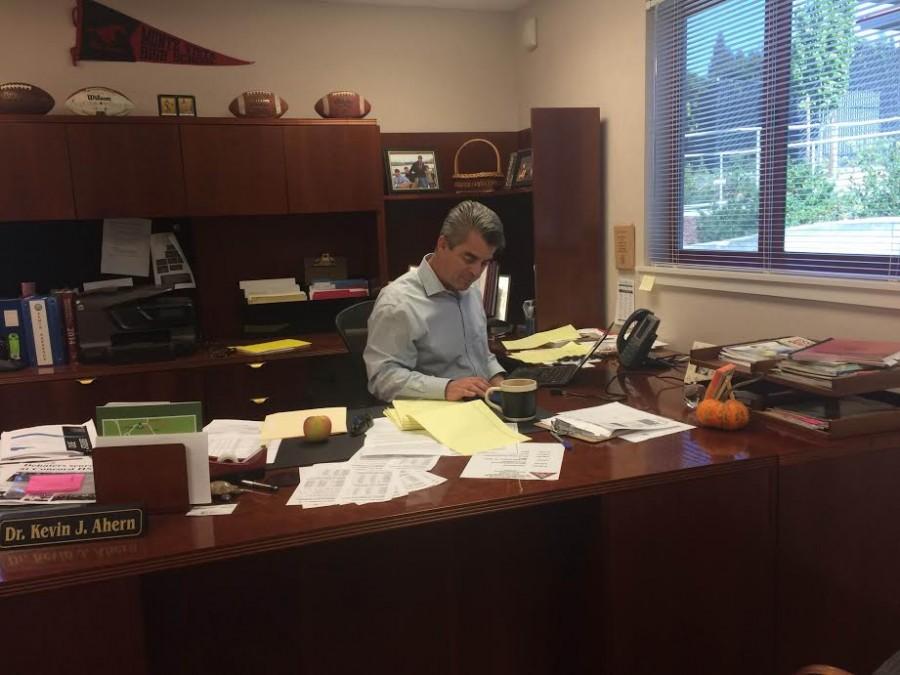 From a place known for its aquarium to a large town at the base of Mt. Diablo, Dr. Kevin Ahern comes to make his debut as Monte Vista’s new principal.

Growing up in Monterey, CA, Ahern was just a typical high schooler. He thoroughly enjoyed staying involved within the school and kept busy doing track, wrestling, and football.

After arriving at UC Davis as a science major on the football team, Ahern learned that science wasn’t for him, so he switched over to English. Shortly after college, he searched long and hard for a job that was just right for him. In the meantime, he entered the gym business and was a personal trainer for his local gym.

Fortunately, after Ahern went back to school to get his teaching credentials, he was able to land a job teaching English at Golden Sierra High School in Garden Valley, CA.

To go along with his enthusiasm of staying involved within his school community, Ahern also became the baseball coach. As his first year of teaching came to an end, he was asked to teach German, a language he grew up speaking as a child. Ahern enjoyed being at the head of the German program and eventually he took on another position as the head football coach.

“I had a lot of fun as a German teacher,” Ahern said. “We had German exchange students. We also won a lot of football games so it was fun all the way around.”

Throughout the rest of the years at Golden Sierra, Ahern became a K-8 Vice Principal first, and moved on to become the high school principal.

Adding on to his many titles at the high school, Ahern also earned his doctorate at St. Mary’s while he was still the principal. Later on, he looked for other positions at bigger high schools similar to Monte Vista.

“Monte Vista was not only a great opportunity,” he said. “It was a great fit as well.”

After moving here this past summer, Ahern wanted to build on the knowledge we have of our school now, but at the same time he would like to have a learning organization.

“It’s the idea of how we learn about each other and we learn to work together in order to support students,” Ahern said.

“Coming from a coaching background, you’re always looking to improve,” Ahern said. “The second you think you know everything, you don’t.”

Ahern would like students to maintain that high level of achievement because otherwise they could get complacent, which is a bad place to be. Over the years, he has worked with smaller schools, but he is learning to adjust to larger ones, such as Monte Vista.

“Working with a larger scale is harder because you have less time to give to different individuals, but it’s coming together very nicely,” he said.

As he learns about his new surroundings, Ahern is finding many things to do around the area. In his free time, he enjoys going back to his hometown of Monterey to visit family, spending time near the Russian River, and staying active whether that be in the gym or hiking in the woods.

After joining the Monte Vista family this summer, Ahern wanted to make sure students were more involved in the decisions that the him and the administration make.

“Having student voice around campus is extremely important to me,” Ahern said.

He is excited to have a fresh start at Monte Vista and is eager to lead our school with the help of students and faculty.