David Matley, coaching Speech and Debate at MV since 1989, is working on preparing this year's team for another successful year. 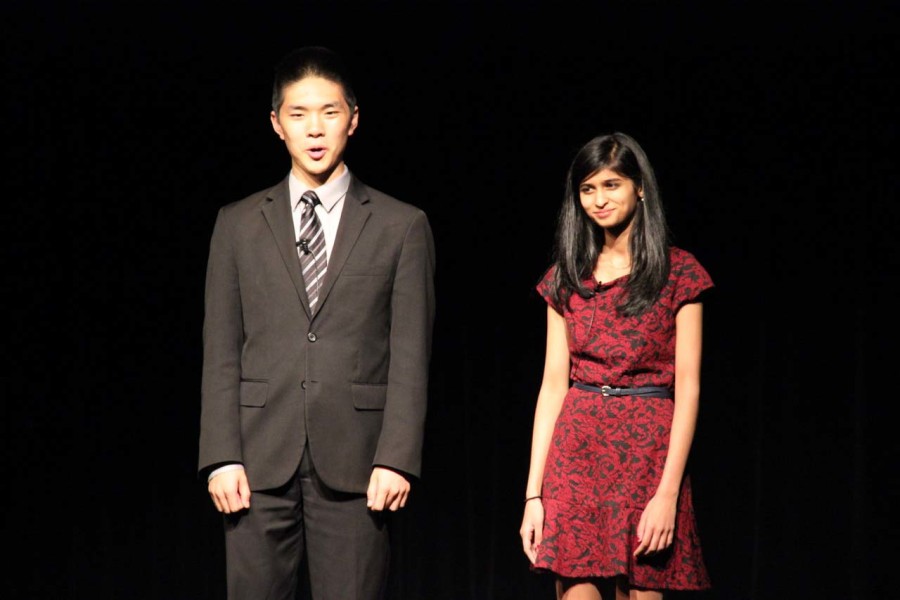 Brian Yu and Neha Dabke performing at the annual event, An Evening with Speech and Debate on Wednesday, March 25.

March is a big month for Monte Vista’s speech and debate team. With approximately 180 members, including both Varsity and Junior Varsity, the team is preparing for weekly competitions in March and April, which will include state and national qualifiers and championship competitions.

According to their website, the Monte Vista speech and debate team has won 30 state titles and six national titles since 1980. The team is hoping to accumulate more in the next couple of months. Competitors are preparing through daily in class practice, and mandatory after school practices in the months of January, February, and March, their most crucial months.

But speech and debate is not your traditional classroom.

“It’s sort of the opposite of the traditional classroom where the teacher will talk 90% of the time,” David Matley, speech and debate coach said. “In this case, the students will.”

Coach Matley has coached Monte Vista’s speech and debate team since 1989. He is an active participator in many educational enrichment programs.

“As I gravitated towards speech and debate, I found a group of very willing students,” Matley said. “These are students who are willing to go above and beyond the average student and apply themselves at all the different areas of education.”

Matley described speech and debate as a “microcosm of education.” It requires knowledge on all different topics such as social issues and current events, dramatic arts and interpretation, and just general writing and speaking skills.

With such an involved and dedicated coach, the team has developed some very successful and hard working students. One of them being 2 time state champion, senior, Brian Yu. Yu is the first Monte Vista student who has ever had a chance at a three-peat as state champion.

“Brian is also the only Monte Vista student who has ever went to the final round of nationals as a junior,” Matley said.

This dedicated team is working hard to advance in the upcoming tournaments and continue to live up to its name. If they win the state qualifier, Monte Vista’s speech and debate team will participate in the State Championship. If they qualify for nationals, they will compete in Dallas on June 14-19. Their next competition will be a the State Championship at Vista Murietta High School, located southeast of Los Angeles,  on April 17-19.

“We all are really excited about the upcoming qualification tournaments,” Noah Kouchekinia, speech and debate Vice President said. “We are hoping to send as many people as we can to the championships. Everyone has been working super hard.”