Pushing through to the playoffs 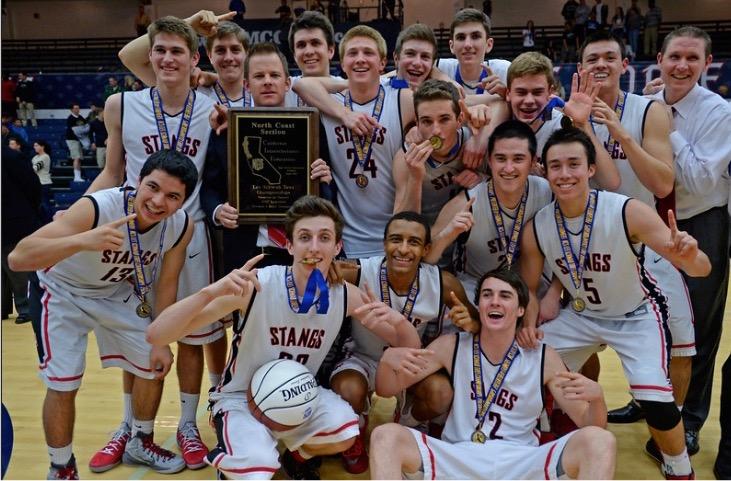 Monte Vista basketball fans may be sad that the winter sports season is over, but luckily our season got to extend just a little bit longer.

It has been an exciting year for both women and men’s basketball team as they both qualified for NCS this year.

Both teams were doubted by many people who didn’t think they could win like before without their star players from last year, but both teams have proven to everyone that they’re just as good.

The boys’ basketball team, coached by Nick Jones, had a lot to live up to this season after winning the state championship last year. With lots of people wondering whether they could do it again, they have proven to everyone that just because all their starters from last year graduated doesn’t mean that they lost their drive for winning games and executing in big games, such as against De La Salle or San Ramon.

No one was really expecting the Mustangs to lose their first league game, but that didn’t stop the team from working even harder in practice to make sure that they would win the next 12 games, and that’s exactly what they did. It was a great run until they lost to San Ramon in the last league game, but they were still able to win EBAL.

Joseph Mileski has shown that he is unstoppable at the guard position all season. Stefan Mitu, who came off the bench as a 6th man last year has stepped up big time this season showing that he could fill Trevor John’s shoes as a pure three point shooter. Wilson LaShells, along with his brother Spencer, have both used their height to their fullest advantage as they grabbed multiple rebounds all season and made lots of put back points beneath the rim, sometimes making a few dunks.

As NCS rapidly approached, the boys were ready for any team they had to face. Luckily with their #1 seed, the team had a home game every single game during NCS.

In their first game against Antioch, Mitu ended with 40 points resulting in a win of 69-63. With the win, the team moved forward to the second round of NCS where they faced Castro Valley. With Castro Valley’s quickness and aggressiveness, Monte Vista had to play the best they could in order to pull out a win. In a close game, the Mustangs were able to defeat the Trojans in a huge overtime win.

With just one more round before the championship game, the Mustangs had to get through Berkeley and that’s just what they did. After the 55-44 win, they were eager to find out the result between their rivals, San Ramon and De La Salle.

After a competitive game between the two biggest rivals of Monte Vista, De La Salle came up on top. Coach Nick Jones and the rest of the team would have another opportunity to defeat the Spartans for the sixth time in a row.

“We were very excited when we found out we would get another chance to play them, you know they are our rivals, and I enjoy competing with them,” Jones said.

With only one day of practice between games, the team headed out to St. Mary’s College on a Friday night to face the Spartans. It was a very close game throughout and a whole thirty-two minutes was needed to come out with the one point victory of 50-49 which was once again led by Mitu who scored 36 points. The Mustangs defended their NCS title from last year and became back to back champions.

Following last year’s state championship and this year’s NCS championship, the team qualified for the open division bracket which consists of schools that are greatly known for basketball such as Bishop O’Dowd and Mater Dei.

“This is a big honor for our program and our school,” Jones said.

Many hoped that Monte Vista would have another chance to win a state championship this year, but with many schools known for their great basketball talents, the Mustangs had the great honor of playing alongside those schools.

“It’s going to be a big challenge, but I think we’re up for it,” Jones said.

In what unfortunately turned out to be the last game of the season, our men’s basketball team fell short against Modesto Christian in the first game of state qualifying. Even though we wanted our team to get back to back championships, our school couldn’t be prouder of what the team has accomplished throughout the year.

So many doubted this team after the starters left last year, but they proved lots of people wrong and even received the great honor of playing in the open division.

Although not receiving nearly as much attention, the women’s basketball team also thrived this season as they also qualified for NCS.

The women’s varsity basketball team, coached by Ron Hirschman, who is a local P.E. teacher at Stone Valley, has been apart of this program for 25 years. It is very seldom to see a coach that dedicated to the sport and wanting to come back each and every year. This season was very special to Coach Hirschman as his team put him in the record books for 500 victories as a high school coach.

After three of the five starters graduated last year, many wondered who could step up to the plate and take their place. From the very start of the season, Hirschman and the rest of the coaching staff knew they had players coming up from JV that could possibly fill those big shoes including Jasmin Lopez who has proven to grab rebound after rebound, Maddie Mooney a quick guard that aggressively attacks the basket, and Taylor Okazaki who has shown her ball handling skills as the starting point guard.

Everyone on the team knew that they had to step it up this year after losing players that scored a majority of their points. Amanda Dailey has really stepped up to the plate this year scoring about 430 points this season. Daily was always known for her long three pointers, but this year she has proven that she can drive to the basket as well.

Brittany Nagra, the other starter from last year other than Daily, has also proven to be a huge contributor to the team’s success this year with her consistent jump shots and rebounding. Alexis Meyer and Lauren Akright were a huge part of qualifying for NCS with their ball handling and rebounding. Taylor Freitas and Autumn Davis also continued to show how much they improved throughout the course of the year.

Going into the second half of league, the women’s basketball team was determined to have a strong finish and hopefully have a run at NCS playoffs. And that’s exactly what they did. They were able to win every game except for Carondelet and finish in the eighth seed going into NCS.

Junior Jasmine Lopez, along with the rest of her team, was ecstatic to find out that they had qualified for NCS.

“Hearing the news that we had qualified brought the entire team together and it showed us that we were actually better than what we thought,” Lopez said.

Unfortunately, the Mustangs were defeated in the first round against Deer Valley in a close game. Overall, the Lady Stangs had a great year and were able to prove to the people that didn’t think they could be successful, that they could still win no matter how big the shoes were they needed to fill.

Senior and team captain Amanda Dailey was still proud of her team’s accomplishments at the end of the season.

“A team is made up of a bunch of truly different people with different ideals, personalities, etc.” Daily said. “You have to figure out how to work together and compromise to achieve your goals.”

Looking back on the season, both our women and men’s team accomplished so much and should be very proud of the goals that each team reached. It may be a sad farewell to hang up those sixth man jerseys, but always remember the exciting journey that our basketball teams have fulfilled this year.