An inside look into The SF Giants bat boy’s life 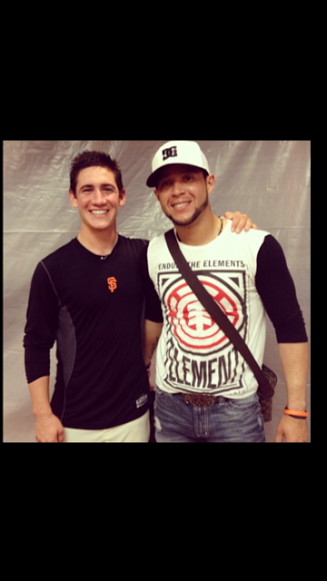 On a cold crisp day in the city, this bat boy arrives to work and meets all the players needs. He not not only sees each home game, but views it from the dugout while rubbing shoulders with MLB players.

For most avid baseball fans this is a dream, but for 18 year old Marco Alioto this is his reality and has been since 2010. Now a senior at De La Salle, he continues to work with The Giants.

Alioto had the privilege of becoming the legacy bat boy position at spring training in 2010, by his current boss. With his eyes lit up he was handed his jersey and pants and his journey began.

How does a kid get so lucky to step into this job? Alioto comes from a long line of bat boys which includes his brothers, father and even uncle. The job ties all these men together with one common denominator.

Not only are the Alioto men connected with the experiences of their job and working in the clubhouse, but they also had the rare advantage of working with the same boss at some point: Mike Murphy. He mentors Alioto and they share a close friendship.

Luckily for Alioto, he has a strong relationship with his boss. In addition, he is a high school student and has to juggle school and a full time job.

“ Sometimes you need to make the hard decisions between your job and the things you want to do,” said Alioto.

He remembers when he was first offered the bat boy position by his future-boss at the 2010 spring training in Arizona. He was handed his pants and jersey just as the other Alioto’s in the family once were.

He says his job is all worth the experience. He exclusively remembers during the World Baseball Classic that the Japanese team played for nearly over an hour with Alioto as the catcher.

“ I felt like I was in a Major League game!” said Alioto.

“One of the biggest benefits, especially when I played baseball, was asking Buster Posey how to catch and block a ball, as I was a catcher as well.”  said Alioto.

Alioto was also present at the 2010 and 2012 World Series as the Giants won, and he had the privilege to run the field not once but twice. He keeps the right attitude and sets his ambitions and goals high. These experiences in his work has helped shape him into who he is today.

“I am very blessed and fortunate to have gotten the chances I’ve experienced.” Marco said.