A place for the sophomores 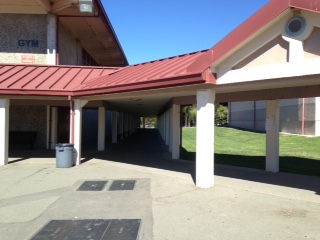 At lunch time, the previous 'Sophomore Hall' is quiet, lifeless, and unavailable to students. Several sophomores wanted to reopen this hallway, so that they could have their own area. They believed that a reopening would fix how crowded the Commons was.

Most high schools seem to have a place for each class to call their own, an area of the school that they can feel comfortable and have somewhere to sit at lunch.

At Monte Vista, there is the Quad, where the seniors reside, the horseshoe, where most juniors choose to sit, and then there is the Commons, where freshmen find themselves at home.

However, the place where most sophomores used to sit, the hall stretching from the science building and along the large gym, has been closed for two years now, leaving current sophomores without a place.

Brianna Bulkeley, a sophomore, said, “I think that the we should have an individual space for lunch because right now we are all crammed with the freshmen, and people are either sitting on the ground or standing.”

She is correct, because finding a spot to sit at lunch with two classes competing for space is difficult. Several students have experienced having no where to sit, and after hearing that, at one point, an area specifically for the sophomores had been open at lunch just two years ago, some have wanted this privilege.

The question is, why did ‘Sophomore Hall’ close, and why is it still unavailable to a class that wasn’t even here when this ban started?

As it turns out, when Sophomore Hall was opened, there was a huge problem with litter.

“The first reason we closed it down was because of the trash,” Mrs. Terranova said. “They would throw food, and their lunch was just left there. Every single day unless a supervisor or an administrator was there, saying ‘pick up your trash’, it was left in a mess.”

A hall filled with trash is never good, causing disgusting smells as well as an unclean hallway. However, some students are desperate for more room, and even have taken action into trying to make this happen.

Becca Gardner, a sophomore, and some of her friends are a few of the students who would like a reopening.

“A few friends and I were disappointed that we couldn’t sit by the building because we didn’t have somewhere to sit at lunch,” Gardner said. “So we went to administration, and we asked them if we could make a petition.”

The petition ended up having about 200 signatures, showing just how much people wanted a reopening.

Mrs. Terranova also said that another reason it was closed was because there simply isn’t enough people to supervise that area, now that we have the student center.

I understand that the administration does not want a mess similar to what happened two years ago in that hall, but I suggest that they open it back up and see how it goes. If students want their own place, they will be willing to keep it cleaner so that they can keep this privilege.

I suggest more trash cans, and for the supervisor that currently keeps students away from the Sophomore Hall to instead supervise it.

I genuinely understand the reason behind the closing, but it is time for the class that wants to sit in the hall to have a chance.

“We have not totally closed our mind on reopening Sophomore Hall,” Mrs. Terranova said. “This is not a final decision that will last forever and ever.”